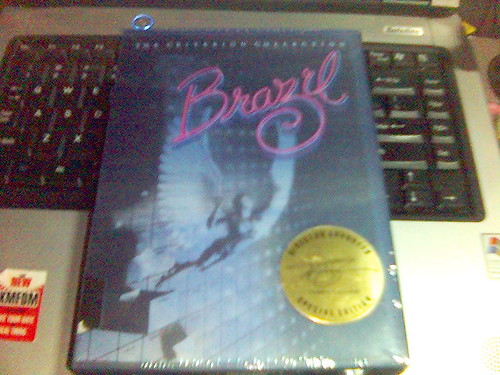 I think the best criteria for judging the quality of a film is whether you’re still thinking about it a week after you watched it. Then there are those films we return to in our thoughts time and time again over the course of years.

I find myself thinking about Jane Campion’s The Piano, Terry Gilliam’s Brazil, and Lasse Holström’s My Life As a Dog even though it’s been years since I saw them. It’s been a couple weeks since I watched, for the first time, Preston Sturges’s Sullivan’s Travels and Robert Altman’s Secret Honor, not to mention Charlie Kaufman’s directorial debut, Syncecdoche, New York.

These movies are all in my head now, jostling my thoughts when I should be thinking about what to make for dinner or who I still need to shop for. When I’m standing in line to get coffee in Georgetown (a neighborhood in Seattle, not Washington. Well, yes, Washington, but not D.C.), I’ll find myself struggling to come up with some way to summarize the appeal of Kevin Smith. Here it is: Kevin Smith is the stupid person’s smart person. Or while driving I’ll have an imaginary conversation with some unidentified cinephile, trying to convince them that wait, wait, there really are high-minded reasons why I enjoyed Will Smith in The Pursuit of Happyness.

When Stephen Elliott suggested the possibility of contributing a blog to this site, it occurred to me that these random thoughts didn’t have to just happen inside my head anymore. I could share them. I know, I’m pretty behind the curve. And another admission: I’m envisioning this as akin to Nick Hornby’s column for The Believer, What I’ve Been Reading, except about films and with less clever bon mots.

I should also admit that I used to work in the DVD business, as an editor at Amazon.com. I was on what was called a Merchandising Team, and was responsible for generating some of those emails you may have gotten if you’ve ever ordered DVDs from Amazon. (“As someone who purchased Citizen Kane, we thought you might enjoy Mr. Arkadin…”) I also occasionally interviewed directors and actors, and created little lists and features for the site. The one perk that made working there mostly tolerable was the free merchandise. For three years I didn’t buy a book, CD, or DVD. I’m embarrassed and sometimes pretty disgusted by how profligate this period of amassing was. But I ended up with the kind of DVD library that could serve as a do-it-yourself film school, with films from the silent era to contemporary world cinema. I stocked up on classics and checked auteurs off my list. I intend to spend the rest of my life making my way through these films, and I’m going to blog about them right here.

Another thing. I’m going to try not to write stuff here that’s designed to make me look smart. When one is writing about, say, Ozu or Jean Cocteau, it may be tempting to consider one’s self an authority on smart people things. I’ll do my best to admit my ignorance when I need to. I suppose what I mean to say is that I intend to be the opposite of Kevin Smith. I will be the smart person’s stupid person.

Stick that in your pipe and smoke it, Nick Hornby.