Remember when The Illusionist and The Prestige both vied to be the winter 2007 movie about magicians? No? Anyway, transport yourself back to those fabled days of January and February 2007. I know what you’re thinking. You were too busy obsessing over the surprising resignation of Kazakhstan’s Prime Minister Daniyal Akhmetov and Japan’s incineration of over 10,000 chickens to battle the bird flu to concern yourself with a magician movie-off. And oh how we trembled at the inevitable Giuliani presidency!

The Illusionist is well worth checking out if you missed it, if only for the comfort food presence of Paul Giamatti. Watching Giamatti is like going to a fancy restaurant and ordering the macaroni and cheese. You know it’s just mac and cheese, but damn what do they put in this stuff to make it taste so good? I declared Giamatti my favorite contemporary actor not after Sideways or American Splendor or even Fred Claus but after his starring role in John Adams. The guy can act, and by act I mean he can yell, indignantly and with eyes popping out. And then there’s the aw-shucks Giamatti moment, the I am having a dawning realization facial slackness that makes you notice the pair of cheeks this guy has, and you just want to grab onto those cheeks and say, “Who’s my favorite actor? Who? Who?”

In The Illusionist Giamatti gets to play a chief inspector tasked with maintaining the aristocratic order of things in Victorian-era Vienna. Seems there’s this love triange a-brewing among an illusionist named Eisenheim (Edward Norton), his once-childhood sweetheart now duchess Sophie (Jessica Biel), and a Disney-level asshole of a Crown Prince played from behind a mustache by Rufus Sewell. Immediately we want Eisenheim and Sophie to fulfill the promise of their love, the Crown Prince to receive his comeuppance, and the chief inspector to frustratedly bark something at the other characters. This movie does not disappoint in this regard. 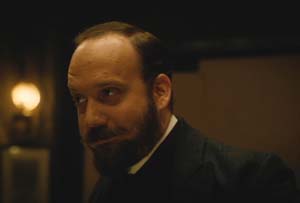 The film takes as its subject the various ways Eisenheim fools his audience’s perceptions and refuses to reveal the secrets of his tricks. This subject matter is mirrored in the gradual delivery of the film’s dramatic elements. We’re led to believe one thing, but by the end all is revealed as an elaborate ruse, and Paul Giamatti once again gets to jerk his head and smile in that incredibly impressed, well-wouldn’t-you-know-it kind of way he does so well. In the last minutes of the movie we’re shown the “trick” that was played on us, the audience, and how not everything was what it seemed.

Usually, this kind of thing really pisses me off. The more I think about the George Clooney Ocean movies, the more I hate them. They’re really meta-movies more than anything. Ask anyone exiting the theater after one of those Ocean movies what Matt Damon’s character’s name was. Or Brad Pitt’s. See? You don’t even know and you’ve seen all three of those celebrity fests. You can easily describe the plot as, “George Clooney and Brad Pitt plot to steal a lot of money from a casino” and no one will be taken aback. No one will challenge you by saying, “Surely Brad Pitt and George Clooney don’t play themselves.”

But what grates more than the starfuck machinery of those movies is how in the last few minutes, we’re finally privy to all sorts of stuff that was happening off-camera while we were otherwise chuckling at the irascibility of the ever-swelling cast. Oh, so they found a way to dress up as a SWAT team to infiltrate the casino. Oh, so there was all this other shit going down that we weren’t in on.

I think of this as the Scooby Doo method of storytelling, where the audience isn’t privy to the actual plot until the very end and it’s revealed the werewolf was the amusement park caretaker the whole time. I nail my creative writing MFA students on this kind of thing, this holding back of important information out of the mistaken belief that not knowing will pull an audience along.

For a counter-example, look no further than Jules Dassin’s 1956 noir Rififi. At the heart of this jewel caper is a 30-minute sequence of zero dialogue in which the thieves carry out their heist. We get to see the planning and execution of the crime in intimate detail, and the effect is riveting. Rather than “spoil” the mystery, such procedural minutiae makes us, the audience, participants in it. Dassin didn’t underestimate our intelligence, but Soderbergh sure seems to.

Which makes Neil Burger’s The Ilusionist all the more complicated, because the movie is about information that is left out, unrevealed. I am willing to excuse the last-reel Scooby Doo revelations of this 2007 sleeper for that reason. Sometimes it is fun to get tricked.