If you’re like me, you grew up running various scenarios about what you’d do if the world were to end. Would you go nuts and run around in a stadium wearing a woman’s slip like the guy in The Quiet Earth? Would you give yourself that mohawk you always wanted and drive a dunebuggy around the desert like one of the extras in The Road Warrior? Or would you gravitate to Denver, Colorado to follow Mother Abigail, or to Las Vegas to follow the Walking Dude? Choices, choices.

I was prepared to hate John Hillcoat’s adaptation of The Road, having been moved a great deal by the novel by Cormac McCarthy. I’d heard that a back story had been tacked on to allow Charlize Theron to emote. I imagined the worst, that the film would attempt to answer why the end of the world happened in the first place, dumbing down the material with the narrative equivalent of guardrails. I was surprised, then, to find the film sticking more or less faithfully to the spirit of the book, avoiding some big confrontational scene in which Charlize’s character meets her fate, allowing her to simply wander into the darkness. 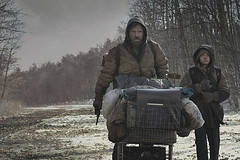 Part of the pleasure of watching post-apocalyptic fare like this is seeing how the auteur renders the physical world. It’s thrilling to see dollar bills strewn on the ground, rapaciously happy billboards standing amid the slag and desolation. The post-apocalyptic genre is a rejoinder to the burdensome noise of consumerism, a glimpse at a future in which the things that we know truly matter–a kind word, a shared meal–will once again regain their currency in our affairs. (McCarthy accomplished this brilliantly in his novel, which Michael Chabon was quick to brand as a work of science fiction. I’d go a step further and suggest that the post-apocalyptic genre no longer be considered a branch of science fiction but a genre unto itself. Imagine if bookstores started shelving The Road alongside The Stand and A Handmaid’s Tale.)

Psst. Isabelle. You've got something on your chin.

Anyway. After watching The Road, I Netflixed Michael Haneke’s Time of the Wolf, which makes a similar choice in not delving into the reasons why the world has suddenly gone to shit, but rather thrusting us into the lives of characters trying to deal with it. The movie stars the steely Isabelle Huppert, who’s just amazing in everything I’ve seen her in, but here I’d have to say she’s wasted. As the mother of two children seeking supplies and civilization, she’s oddly passive. The whole movie is a study in the stereotype of French people sitting around waiting to be rescued, and grousing about it. I was galvanized by Haneke’s original Funny Games, impressed by how thoroughly he was committed to not flattering our expectations. But the subtext of Time of the Wold seems to be that when the world ends, everyone just gets really grouchy at each other. And isn’t that a bitch.

My last Eyeball post was sometime in January, and I guess my excuse is that I was finishing a book and had a huge teaching load. I’ll endeavor to post more frequently in the near future. But an interesting thing I’ve observed in the interim has been how my movie-watching habits have changed. When Stephen approached me about doing a column for The Rumpus, I jumped at the chance to write about DVDs. In the past six months I got an iPad and have been using the Netflix app, watching stuff via instant streaming. Little discs that spin in a drive are looking increasingly antiquated to me, and I’m starting to feel a little like those guys in the ’90s who were fiercely devoted to their vinyl collections. We knew this day was coming, but I’m finding it harder to think about films as existing in the discrete realms of the cinema and the home screen. I’d be curious to hear how other people prefer to experience films these days.