I’m teaching a class at Richard Hugo House in which we look at experimental films as writing prompts. I’ve always wanted to teach a film class, and marrying writing exercises to viewings of films seemed like a good way to shoehorn this desire into a nonprofit literary arts center. There are aspects of cinema that overlap with fiction (narrative, obviously), but I’m becoming more interested in cinema’s points of divergence from fiction, the points at which it achieves something beyond narrative, where it leaps into a realm that can only be expressed visually.

What better place to start than Un Chien Andalou? You know it as Luis Buñuel and Salvador Dali’s 1929 16-minute… what should we call this? Masterpiece? High water mark of surrealist cinema? Inspiration for a Pixies song? Just watch it:

I have screened this film for two sets of students in the past two weeks and each time we get to the eyeball scene the audible gasps arrive on cue. The disc I own includes a couple bonus features, including an interview with Buñuel’s son Juan-Luis. Juan-Luis describes the process by which Dali and his father generated ideas for the film. They lobbed ideas back and forth and shot down any idea that seemed too obvious, hoping to subvert rationality as thoroughly as possible. 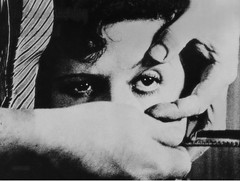 So instead of a man dragging a train, why not have a man dragging two pianos? And what to put on those pianos? Jump rope? No, bad idea. Dead donkeys. Great idea!

Watching this film over the years while I’ve worked with writing students inspired a writing exercise which I’ve revised a bit and which I presented at Hugo House this week. It’s a list of 17 incomplete sentences. The object is to complete each of the sentences three times, and to go down the list as quickly as possible. For instance:

Complete three times, then move on to the next one. And so on, through 16 more incomplete sentences.

Every time I conduct this exercise I ask for a show of hands as to who used the word “husband” in some way for prompt #1. Invariably about half the hands shoot up. Here’s another one.

A lot of times participants in this exercise will complete this sentence with some mention of a bottle of hard alcohol. I have a theory as to why that is.

When we need an idea, we turn to our subconscious and put in a request. Our subconscious, not wanting to get up off the couch, looks around for something within arm’s reach. In the example above, when one reads alcoholic, one’s subconscious immediately tries to find something that will fit the word. And so it reaches for obvious: “a fifth of Jack Daniels,” “a beer,” “an AA book.”

But what happens when we tell our subconscious to try again? That’s where things start getting unique. By the third completion of an unfinished sentence, the examples being thrown around the room are wildly original. The subconscious rises to the challenge. And what surprised me the first time I conducted this exercise was how the first completions of sentences in the middle and end of the exercise tended to diverge from person to person, as well. The exercise seems to demonstrate how the subconscious quickly warms up and starts playing ball once it understands it is expected to provide original ideas.

I’m going to teach more classes in coming weeks. Next week I’m going to screen some Stan Brakhage. I’m still tweaking the writing exercise for that one and will blog about it here.