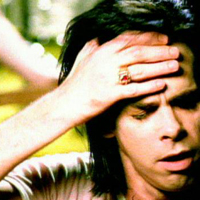 Welcome to Nick Cave Monday, a new blog where The Rumpus lets me gush about the greatest musician in the world.

“I’ll crawl over 50 good pussies just to get to one fat boy’s asshole.”

I love randomly saying that to friends. For a moment they look horrified and wonder if it’s time to send me back to the hospital. To their relief I confirm that it’s a Nick Cave quote. “Come on, Stagger Lee, keep up friend.”

Let’s get right to it, here is “Stagger Lee” by Nick Cave and The Bad Seeds:

A couple of fun notes on that video, first Nick’s shirt, “Love You, Take That.” I didn’t know that Take That was a pop band and that shirt is very limited edition available after the band broke up. The makeup artist on the set wore that shirt, and Nick asked to borrow it for the video shoot.

Also, when I first played the song in my apartment my cat flipped out and ran for cover on the part where Blixa Bargeld screams. I told Blixa about that when I interviewed him and he said, “Of course, my scream scares many animals.”

Now for some live versions of “Stagger Lee” as well as versions of this traditional song that Nick literally ripped a new asshole on.

“Stagger Lee” performed on a TV show with Nick’s love interest of the time, P. J. Harvey, standing by, watching her man.

Now let’s check out some other versions of “Stagger Lee,” starting with the late Amy Winehouse:

Let’s bring on the version by Mississippi John Hurt:

Yes, Nick is sick in the head for his twisted version of a traditional ballad, that’s why we love Nick.

What? You want a version recorded even earlier? Here’s Ma’ Rainey:

Another tribute to the legendary “Stagger Lee,” here is a rocksteady song by The Rulers, Wrong Emboyo, that would be later covered by The Clash:

Let’s get back to the man, Nick Cave, and the boys doing a live version of “Stagger Lee” around 2008:

Thanks for reading, watching and listening and come back next week for another edition of Nick Cave Monday.