In honor of Will Eisner week, Symposium speakers Jeremy Dauber and Danny Fingeroth devoted their presentations to exploring what exactly made Eisner Eisner. They discussed both his storytelling techniques and the themes that made his work so personally powerful for both of them. For Dauber, a Yiddish Literature Professor at Columbia University, this meant comparing Eisner’s writing to early 20th century American Yiddish literature. For Fingeroth, author, educator and former Marvel writer/editor, Eisner’s work contained several deeply resonant themes that he explored in a multi-media presentation. One of the night’s main questions was how Eisner, already an established comics creator and 61 years old when he published A Contract with God, examined the past through a new medium: the graphic novel. This interaction between past and present might help explain the particular power of his stories and the way they shaped the genesis of the graphic novel. Calling his talk “A Study in Voice”, Dauber explained how, in order to study Eisner’s language and its relationship to American-Jewish writing, he had purposefully isolated the text from the images in A Contract with God. Dauber compared quotes from Eisner with passages from books by three prominent American-Jewish authors: Abraham Cahan, Anzia Yezierska, and Henry Roth. Although Eisner never explicitly stated that these writers affected his work, Dauber points out that they were well-known in American-Jewish society in the 1920s and 30s, when Eisner was growing up. He pointed out several strong similarities in language and theme between these works, including a powerful sense of place (to the point where the urban setting is a character itself), “high register language,” sensory-rich descriptions, a generational conflict between immigrant parents and assimilated kids, and a forbidding but compelling impression of Jewish spirituality. Constant rain, or as Harvey Kurtzman called it, “Eisnshpritz,” poured down on city streets in Eisner’s books and Cahan’s books alike. The conflict between Jewish parents and American-Jewish kids holds a central place in Eisner’s work, as it did in American-Jewish literature and life. Anzia Yezierska uses language to establish this relationship, telling the story of an impatient daughter uses proper English to scold her parent’s table manners while her parent argues with her in Yiddish-constructed English. In A Life Force, Eisner frames a similar familial fight by using American English and Yiddish-influenced English. The son and his mother are not just arguing about not coming home for Friday supper, they’re actually arguing about his assimilation and his marriage to a non-Jew. Using proper English is an impicit put-down to his mother’s Yiddish-inflected language. However, by capturing this total exchange, Eisner shows both the distance between these factions and the complicated connection they still manage to create. Dauber highlighted how Eisner was particularly adept at capturing dialogue for characters of different ethnicities, for instance when tenement children played together. Tension and cooperation, differences and understanding between people of different races was a marked theme in Eisner’s work, reflecting the diversity of the New York he knew. Author Henry Roth uses slang in his novel Call It Sleep (1934) to show the difference between local New York boys and the young Jewish protagonist. In marked contrast to the generational language wars in the previous example, Roth renders Yiddish passages in lyrical, elegant prose while the “New York-ese” of the streets is in crude, phonetic slang. Finally, Dauber used a Roth passage about Hebrew school to exemplify the simultaneous terror and fascination Judaism had for first generation American Jews. Similarly, Eisner’s A Life Force features a frightening Rabbi. “Judaism is portrayed as something terrifying and old, fossilized, but also with a lot of power . . . it opens up a plane to the past to a way of experience that’s transformative,” Dauber said. “Roth is the missing piece in how we think of Eisner’s work … taking an unclean land and an experience of [this] medium and transforming it into something transcendent.” Danny Fingeroth picked up where Dauber left off in discussing the distinguishing themes of Eisner’s work: generational conflict, an animated urban setting, conflicted identity and one’s connection to the past, racial tensions, prejudice, and spirituality. He talked about how these themes fueled his enduring personal connection to Eisner’s work. He also emphasized another Eisnerian element: humor. Eisner told unsentimental stories about identity, but he also “needed to entertain.” Fingeroth then showed several Youtube video clips and interviews and images from Eisner’s graphic novels. He began his presentation by underscoring his fascination with these themes as examined by Eisner, Saul Bellow and Philip Roth. There’s “some part of the human condition they touch on, a window back into a world of growing up—a world that existed before we did,” he said. In a 1990 “Prisoners of Gravity” video interview with Eisner, Eisner joked that his Dropsie Avenue comics were “the most inexpensive longterm therapy [he] could possibly get.” By the time he started making A Contract with God, he’d given himself the freedom to tell whatever story he wanted, and so he told the story of his childhood, the story of Jewish life in the first half of the 20th century. 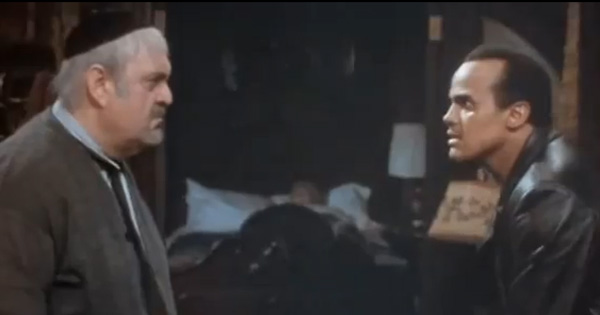 Fingeroth presented video clips linked to Eisner or otherwise reflecting Eisnerian topics:  a German adaptation of Eisner’s comic“The Super,” the trailer for “The Angel Levine,” a drama between a Jewish man and a Black man based on a Bernard Malamud novel, and “Goodbye Columbus,” a 1969 adaptation of a Philip Roth novel. Closing with images of Eisner’s Cookalein, Fingeroth pointed out that his stories were often unsentimental and modern in their unflinching explicitness. Cookalein depicts harsh scenes of cruelty, humiliation, and rape. Later, in the Q&A, the question of Eisner’s decision in the 60s and 70s to tell stories about the 30s came up. Participant Jude Killory pointed out that it was interesting to hear a voice of the 20s and 30s express elements and perspectives from the 70s. Fingeroth characterized this as done in “an old fashioned style” but with “a modern sensibility.” “His stuff is perennial . . . people still see Eisner’s work as something to express a message from”(Fingeroth). He continued about Eisner’s canny business sense and his sensing that the world was ready for the graphic novel. “He did the math – all those twelve-year-olds in 1944 are all adults—if they like comics, maybe they’d like this. Which made Maus possible, which made Fun Home possible. Maybe that stuff would’ve happened eventually, but slower.” 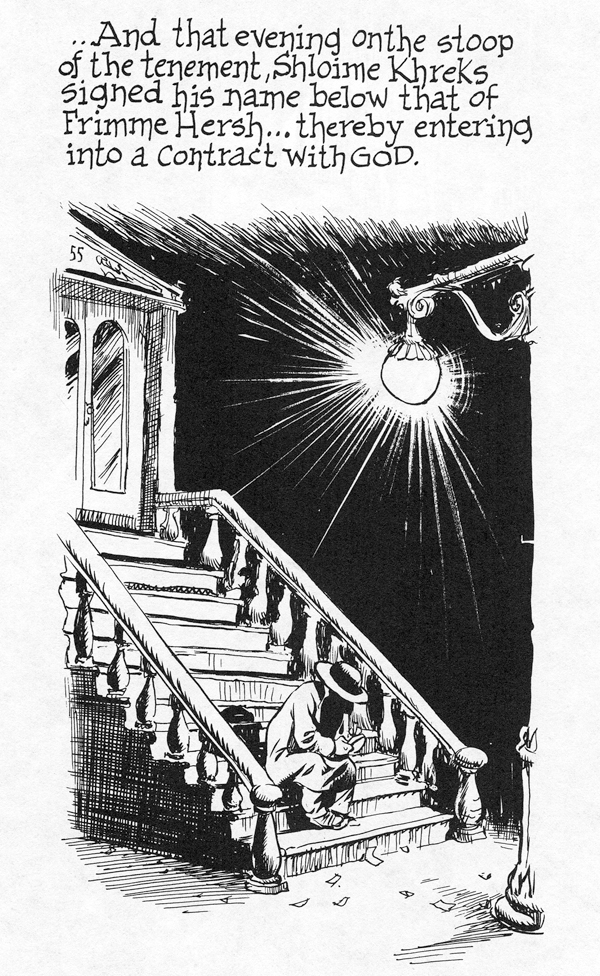 As discussed above, the Symposium talked about Eisner’s looking back into the past while using a current sensibility and a new medium. Also, Eisner’s recognition by mainstream culture, his legacy, readers’ ability to identify with his stories, and his place in comics and in literature were explored. The nature of memoir and the tendency of storytellers to focus on their childhoods as defining experiences also came up.

Danny Fingeroth: “A lot of old guys didn’t have a second life. He had a second explosion . . . he was 61 when he did A Contract with God.”

Second Image: “Cookalein” from A Contract with God, Will Eisner, published by W.W. Norton & Company, 1978.

Third Image: A Contract with God, Will Eisner, published by W.W. Norton & Company, 1978.

Fifth Image: “Cookalein” from A Contract with God, Will Eisner, published by W.W. Norton & Company, 1978.

Eighth Image: A Contract with God, Will Eisner, published by W.W. Norton & Company, 1978.

About the author: Andrea Tsurumi is an illustrator and cartoonist playing merry hell in New York City. You can see her work here and her latest projects here.