What strange bedfellows! The adaptation of classic literature into comics has a full, if oddball, history. There’s something strange about squeezing revered cultural landmarks into the parameters of what had always been a vehicle for schlock. Cartoonist Bob Sikoryak‘s volume Masterpiece Comics has crowned an accomplished career of cross-breeding literary classics into comic-book and comic-strip formats. His own work has mined the vein of parody, but he’s a dedicated scholar of the more serious attempts at comic adaptation as well, from the dawn of newspaper comics in the late 19th century into the explosion of work that’s accompanied the dawn of the digital age.

Newspaper comics first appeared around 1895 and exploded, their popularity terrifying scholars and librarians everywhere. Once this lowbrow phenomenon found itself pulling people’s attentions away from highbrow culture, the dance between the low and the high started and has never stopped.

Cartoonist Ed Wheelan’s comic strip “Minute Movies” lampooned literature and society with it. One inspired episode from 1917, titled “Don K. Haughty” and subtitled “Ed Wheelan’s Burlesque of Don Quixote” casts the title character as a self-appointed prohibition agent and even cleverly borrows a Gustave Dore illustration of Don Quixote and Sancho Panza on horseback, lance in hand, poised on discovering a bootlegger. Another hilarious burlesque is Milt Gross’s 1939 wordless parody of Rebecca. M.C. Gaines (1894-1947), invented the modern comic book, first as compilations of newspaper comic strips and eventually as the host for the wildly popular Superman. After selling off the super-hero comics he’d helped into print, he inaugurated Educational Comics, reverently adapting worthwhile literature into the comic format, most notably Picture Stories from The Bible. Told in over 200 pages drawn by Don Cameron, Picture Stories from the Bible, which Gaines kept in print for years, could loosely be thought of as an early graphic novel. His Bible comics were printed in multiple editions, and eventually sold several million copies. He donated part of the profits to various religious organizations.

Other attempts at adapting “straight” literature into comics began around this time, and there even evolved a “look” for classier material: one example is an adaptation of A Tale of Two Cities, drawn by Merna Gambol. We see here more accomplished draftsmanship–nothing cartoony–and, most notably, no word balloons, with text set into a caption box. This material even billed itself as “illustrated narrative” instead of “comic strips.” The aim was class.Tellingly, though, these pages didn’t appear in sequence to make a complete continuity, rather, they were used as filler pages here and there to fill the 64 page count in other titles like New Comics (1937). A creditable Ivanhoe adaptation also ran in New Fun comics around this time–conveniently, Walter Scott’s classic is in the pubic domain–again, illustrative drawings and no word balloons. Sikoryak generally labels this balloonless format a “Prince Valiant style.”

While Gaines was publishing his Educational Comics, another publisher, Albert Kantor, became interested in the educational potential of the comic book medium and started a comic line devoting each 64-page issue to a single literary work. Originally called Classic Comics, they were an earnest, if a little clumsy, attempt to do something great. With a title change suggested by an accountant that would avoid the stigma of “comics,” this series was to last, in various incarnations, for over 70 years. We still know them now by their more dignified title, Classics Illustrated.

Classics Illustrated, whose ambitions Sikoryak wryly characterizes as as a “gateway drug to classic literature,” are the best known series of comic book adaptations ever published. They didn’t start out perfect. They took liberties with the literature they were adapting, and the bugs of adapting books to comics had to be worked out–the famous Hamlet soliloquy is so wordy that the that there was hardly any room left in the panel for the picture of Hamlet himself! In time, though, Classics Illustrated found their signature style: more refined, and never grotesque or gruesome. They took on their familiar look when they switched from line-art cover art to painted covers, and raised price to 15 cents. In response, Dell Comics started a similar line of classics adaptations. Educational Comics became Entertaining Comics after M.C.Gaines was killed in a boating accident in 1947 and his son Bill inherited the business. The comics that the younger Gaines came to produce, like Tales from the Crypt, were as different from the elder Gaines’s comics as could be imagined. Still, the new E.C. comics did some exceptional adaptations which are still celebrated today, most notably Ray Bradbury science fiction stories in the s-f anthologies Weird Science and Weird Fantasy; in fact, Bradbury enjoyed a congenial relationship with EC’s writers and editors. The most outstanding such achievement, “The Flying Machine,” set in ancient China, was faithfully adapted and beautifully drawn by Bernard Krigstein in a Chinese-influenced style. 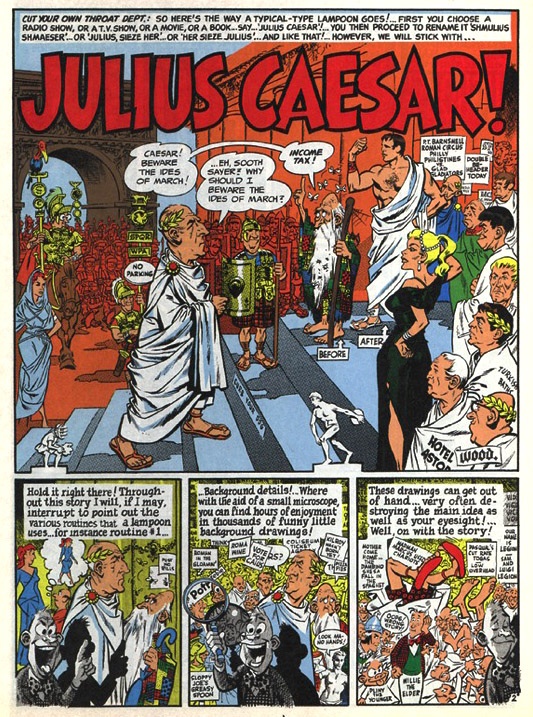 The burlesque–the folly–the absurdity–of adapting classical literature into lowly comics–the phenomenon we saw in Ed Wheelan and Milt Gross–reappeared with a vengeance under EC’s other editor Harvey Kurtzman. Mad the comic book lampooned high art and low with equal vigor, and Mona Lisa herself holds a Mad comic on the cover of issue number 14. In the 17th issue, Mad took aim at satire itself; in its retelling of Julius Caesar, It devastates the clichés of humor comics, classic comics, contemporary films, and just about everything else. And Mad the magazine faithfully kept the tradition of adapting literary works into comics over the years. “If Famous Authors Wrote the Comics” from the mid 1960’s, written by Frank Jacobs and drawn with by Wally Wood, flawlessly apes the styles of the day’s most popular cartoonists.

Harvy Kurtzman left Mad, but never lost his talent for inserting high culture into low comics. He and lifetime collaborator Will Elder quoted Don Quixote, complete with reproductions of the Dore illustrations, in a series of cartoons starring the eternally naive Goodman Beaver in Help magazine in the early sixties. But it was the underground cartoonists of the late sixties that really went to work sending up classics with great glee, most particularly in “Classics Crucified,” a regular feature by Justin Green in the underground anthology Arcade. The spirit of Ed Wheelan’s minute movies lived on.

The Marvel super-hero phenomenon of that decade managed a brief but remarkable piece of adaptation in the final page of Avengers #57– a panel by panel narration of Percy Shelley’s “Ozymandius” illustrating a neighborhood kid ironically playing with the discarded head of a robot who had fought the Avengers and lost. Joe Kubert produced a volume of Bible stories in a large format for DC, doing some of his best illustration work. V. Today: Graphic Novels and Beyond

The last few years have shown anything but a lack of comic adaptations, indeed, so many worthy publications have been produced in so many sizes and formats that an entirely new study could be made where space would permit. Will Eisner published a ten-page sequence of Hamlet’s soliloquy in a contemporary urban setting, Robert Crumb has published an edition of Kafka that serves as a hybrid adaptation and biography, and Craig Russell has made a name for himself adapting operas with a rich and imaginative illustration style. Posy Simmons’s Gemma Bovary stars a literature lover as commentator and suitor of the titular heroine, disappointed, though, that her life and personality doesn’t more closely match “the” Bovary. A ten-page Ulysses by David Lasky has been published, and there seems no end of manga adaptations.

Sikoryak considers the most worthy of the new crop to be a graphic novel of Paul Auster’s City of Glass. Starting with the premise that the novel itself is “not adaptable,” Auster worked closely with scriptwriter Paul Karasik and illustrator David Mazzuccelli with the cooperation of Art Spiegelman to create a work whose structure “dissolves as you read it,” as the character loses his grip on reality. More than simply a crime story in comics form, City of Glass is an existential novel, which the cartoonists have reinvented even while staying faithful to Auster’s mood and ideas.

In the end, Bob Sikoryak concludes, the adaptation of established literature into comics may invite amusement or outright folly– but the rich trove of material produced over this past century provides many worthwhile takes on literature and the comics themselves.

R. Sikoryak is the author of Masterpiece Comics (Drawn & Quarterly). He’s drawn for The Onion, The New Yorker, GQ, Mad, SpongeBob Comics, and Nickelodeon Magazine, among many other publications, as well as the TV series The Daily Show with Jon Stewart.  He’s done storyboards and design work for Augenblick Studios on their animated projects Ugly Americans, the SNL Midnight Snack shorts, and the upcoming Zoolander. He teaches in the Parsons Illustration Department and at the Center for Cartoon Studies, and he hosts the live cartoon slide show series Carousel.

Mark Lerer holds a bachelor’s degree from Princeton University and an M.F.A. from the New York Academy of Art. His cartoon drawings have been published in The New York Post, and are regularly featured on Facebook.