At the 73rd meeting of the New York Comics and Picture-story Symposium, Keren Katz presented on the history of comics in Israel. An Israeli herself, Katz opened with a brief overview of her own comics, from early documentarian efforts through the lyrical, surrealist pieces that mark most of her output, and back to more personal recent work. Her comics are protean and wildly imaginative. One gets the immediate sense that Katz is always on the lookout for material, pulling whatever she sees into lush colored pencil arrangements. She described being inspired by, among other things, Youtube clips of the dancer Pina Bausch, historical accounts of Franz Mesmer, and cookbook photographs of poultry. Image from “Were You Watching” by Keren Katz

She framed her interest in the form by looking at a group of artists she termed “guerilla poets.” Among these were writers like Eran Hadas and Roy Chicky Arad, whose experiments have included crowd-sourcing material, as well as the American Kenneth Goldsmith, who recently hosted an unorthodox reading series at MoMA in NYC. At its heart, Katz suggested, their project is to re-contextualize the familiar. She further suggested that comics, with its central importance of juxtaposition, can do similar work. Katz transitioned to her historical account, describing the early Israeli cartooning scene as somewhat ad hoc. In pre-statehood years, poets and fine artists were drawn to what would become Israel, but few trained cartoonists joined them. So writers like Leah Goldberg borrowed from American models of newspaper comics and picture books to create material specifically geared toward children. Much like in the States, this work tended to be broad and was generally looked down upon. Approaching independence and in the years that followed, it grew increasingly propagandistic and militaristic. A common theme was children heroes volunteering to help protect the nascent state from its enemies. There were of course racial overtones, as these enemies tended to be from neighboring Arab states.

Katz implied that this set up some central conflicts that all Israeli cartoonists have had to deal with since. These included tensions between the collective and the individual; between propaganda and artistic vision; between the enormous historical pressure of belonging to a state founded largely by survivors of genocide, and the desire to live a normal life; or even between work with a clear social agenda and a more childlike desire for fantasy and escapism. She argued that the comics form is particularly well suited to navigate these difficulties, specifically because it blends childlike qualities (e.g., unmediated creativity or tendencies toward levity) with more adult ones (e.g., craftsmanship and lofty ambitions)—and more generally because it has the power to place conflicting narratives literally side by side.

With their form widely seen as inconsequential, early Israeli cartoonists had some freedom to slip satire under the radar. By the 1970s, however, political winds had shifted to the point that Ido Amin’s satirical comics led to charges of espionage and treason. The change by no means did away with overtly political content. But over the years many cartoonist turned to subtler strategies as they confronted questions of what it meant to be Israeli, or simply to be a person living in Israel.

On the one hand was a creator like Dudu Geveh, a figure basically synonymous with cartooning in Israel, who was active from the 70s until his death in 2005. In text-heavy, dynamic comic strips, Geveh focused firmly on the quotidian. Commiserating with underdogs, he used his famous duck character to explore the dreariness of urban life in Tel Aviv. On the other hand is an artist like Z. Engelmayer, Geveh’s frequent artistic collaborator, who employs more overt social critique. For example, one his projects remixes visuals from whitewashed children’s literature with a gas-mask motif. 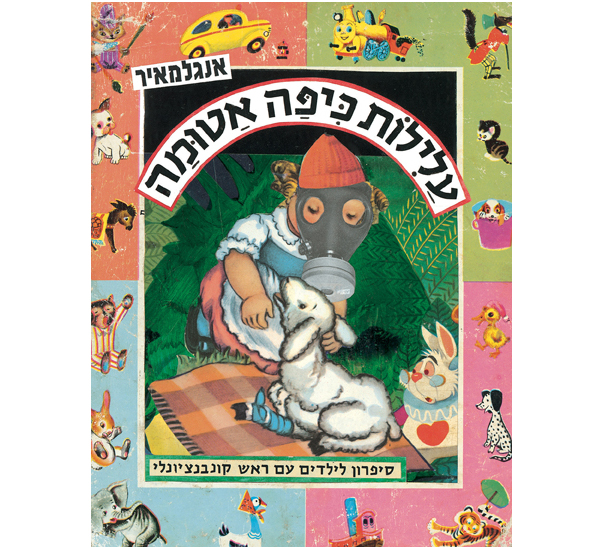 Image from “Tales of Little Masked Ridinghood” by Zev Engelmayer

The contemporary cartoonist Hila Noam has taken a similar tack to skewer old, propagandistic children’s classics. Appropriating an unpublished story from a series of adventure novels about an invisible boy named Dani-Din, she used the explicitly visual nature of comics to highlight the source material’s racism. Turning to the Israeli cartoonist that Americans are probably most familiar with, Katz introduced Rutu Modan’s work with some of her childhood sketches. Pictures of bunnies and children were accompanied by tanks and flags, driving home Katz’s point that this culture is one saturated with news of current events. (And that news is often quite explicit: one of Katz’s slides included a photograph from a news report that clearly showed a severed head in the aftermath of a bombing.) Using the reveal from Modan’s Jamilti—that an Israeli nurse’s kiss to a dying bomb victim was in fact delivered to the bomber himself—Katz highlighted how the cartoonist does not dodge social or political issues in her work, but simply moves them somewhat off center. Page from Jamilti by Rutu Modan, 2007

Katz returned often to framing metaphors of centrality and periphery as she discussed other artists. She pointed out that Israeli media tends to originate in Tel Aviv, the cultural center, but that most news tends to happen elsewhere. The city is something of a bubble, she suggested. But this, too, is complicated by the country’s tiny size: nothing can actually be very far away.

Tel Aviv is constantly building over itself, she said, showing a piece by Nitzan Shorer in which Bauhaus architecture is razed to make room for new construction, and pointing out the recurring visual device of a crane in Ella “Kookoo” Cohen’s work.  Likewise, she emphasized the beautiful, Islamic-art-inspired floor patterns from Adi Kaplan and Shahar Carmel’s “The Parents of Greyheart,” set in Tel Aviv’s Jaffa district, which was formerly a cultural melting pot and is currently a gentrified enclave for the creative class. Tel Aviv is Israel’s transportation hub as well, and Katz highlighted transportation themes in several artists’ work. A piece by Omer Hoffmann focused on the architecturally chaotic central bus station; to make it, Hoffmann simply trailed a couple as they got hopelessly lost in the building, taking visual notes. An illustration by Cohen juxtaposed that station with the extreme efficiency of the one in the north, from which many military transports depart. Bus station photograph and image from “Mickey and Dorit Get Lost” in Based on A Real City, by Omer Hoffmann 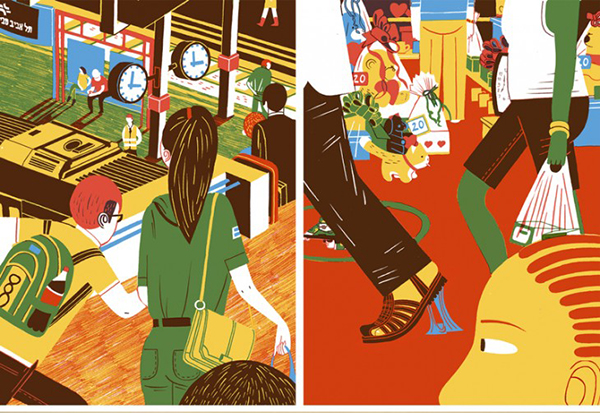 In Israel, Katz reminded us with a striking drawing by Shimrit Elkanati, buses have inescapable associations with suicide bombings. At the same time, for her and other artists, they represent a chance to escape from claustrophobic routines and find small adventures, drifting among the unpredictable and varied stories of loudly conversing strangers. Katz closed looking at Omnibus, a  two-creator anthology by Einat Tsarfati and Hila Noam. The first story in it focuses on the momentary encounter between two lost and lonely characters: an elderly bus driver and the granddaughter of his lover. His life story mirrors the inception of the Israeli state, and ultimately he helps the young woman by realizing that he can’t be responsible for saving her. The second focuses on a woman who endlessly rides buses from town to town to escape the people she’s hurt. Pages from “The Title of This Story is ROADS” in the anthology Omnibus, by Einat Tsarfati

Q&A focused on the availability of this material in English translation. Unfortunately, there is not much currently in circulation—she suggested the work of Rutu Modan, as well as Farm 54 by the brother-sister team of Gilad and Galit Seliktar, the Omnibus anthology, and pieces recently published in Words Without Borders by Dan Allon and Hadar Reuven. Reuven also currently has an Indiegogo campaign to translate his graphic novel Andromeda Sleeps into English. Pages from Andromeda Sleeps by Hadar Reuven and Shachar Galek

2. Image from an upcoming story in The Graphic Canon by Keren Katz, 2014

4. Photograph of Eran Hadas and Keren Katz writing and drawing at a Tel Aviv mall known as “The Center”

5. Image from Tales of Little Masked Ridinghood by Zev Engelmayer

10. Pages from “Habima” in the anthology Based on A Real City by Nitzan Shorer

12. Image from “The Parents of Greyheart” by Adi Kaplan And Shahar Carmel

14. Photograph of Tel Aviv bus station and image from “Mickey and Dorit Get Lost” in  Based on A Real City, by Omer Hoffmann

16. Pages from “The Title of This Story is ROADS” in the anthology Omnibus, by Einat Tsarfati

17. Pages from Andromeda Sleeps by Hadar Reuven and Shachar Galek

Alexander Rothman is a poet and cartoonist. His work has been featured in publications Seneca Review, The Brooklyn Rail, and The Rumpus. He and the author Joshua Malbin cohost Comics for Grownups, a comics-review podcast available for free on iTunes. Rothman lives in Queens, New York, and posts new work at versequential.com and versequential.tumblr.com.