On Monday, July 27th, at the 92nd New York Comics Symposium, cartoonists and educators Tom Hart and Leela Corman presented on their work and the history and mission of the Sequential Artists Workshop. Tom Hart opened the discussion with a presentation on the Sequential Artists Workshop, the art school he founded and runs in Gainesville, Florida. SAW is one of only three stand-alone comics institutions in the country (the other two being CCS and The Joe Kubert School of Cartoon and Graphic Art). Hart described the school as “a one room school house—very lo-fi.” SAW offers a one-year program, a sort of “comics boot-camp,” for considerably less tuition than the average art school: only $3,500.00 for the year. Hart explained that this is achieved thanks to the fact the school is run by “very hungry samurai” (a Kurosawa reference.) Hart praised Gainesville as an ideal location to run his art school. There is a cultural vibrancy and community-mindedness to the town that benefits a place like SAW. The school itself shares a courtyard with an info shop, one of the longest-running feminist bookstores in America, and a cooperative grocery store.

Hart presented several examples of student art, some of which was made on the school’s Risograph machine (“we’re in on the trend”). For Hart, the mission of the school can be summed up in what he personally wanted but found lacking in his own art school experience: he wanted an intensity of interaction, he wanted it to be hard, and he wanted to “learn shit.” In essence, Hart has attempted to create the school that he himself would have loved to have attended. Leela Corman spoke next, giving a brief history of her past work and an exposition of her current cartooning projects. She began by sharing the work from her book Unterzakhn (Schocken, 2012) a graphic novel set in the Lower East Side of New York City at the beginning of the 20th century. The title is Yiddish for “under things,” and Corman quipped that her most intimidating audience is actually older Yiddish speakers in New York and Miami. The book started as a much shorter comic for the Megan Kelso anthology Scheherazade, called “Fanya Needs to Know,” but her interest in the character of the little girl Fanya eventually grew into a 200-page book. Hart playfully asked from the audience if the story was autobiographical. Laughing, Corman explained the inside joke by confirming that, no, she was not raised in a brothel in the Lower East Side 100 years ago, as the character of Esther was, but that she does feel that autobiographical comics dominate the independent comics scene and laments the dearth of literary fiction in comics. Despite being a champion of more pure fiction in comics, many of Corman’s more recent projects have drawn on her personal experiences. One, “It has Always Been Here,” which Corman wrote for The Women’s Review of Books, was inspired by a trip she took to Turkey. While touring the supposed site of the Virgin Mary’s death she noticed a stone pool and speculated that it was some sort of sacred site from antiquity. The resulting comic was a meditation on the generations of women reaching back through the millennia who had come to this spot to worship, wish, and petition the fates. Corman also wrote an autobiographical piece about her days teaching belly dancing classes on King’s Highway in Brooklyn for Tablet Magazine. In another dance related piece, entitled “Luna of Cairo”, Corman collaborated with a fellow belly dancer on her experience dancing in post-revolution Egypt.

Her most recent project, “Yahrzeit,” also published at Tablet Magazine, is even more personal. It heartbreakingly deals with not only the death of her first child, but also the survival of her Polish grandfather, and how he escaped the Nazis during World War II. The comic, which won a silver medal from the Society of Illustrators, brings home the idea that “trauma isolates you” and that “certain kinds of trauma are impenetrable.” When Corman’s child died, she longed for, and drew strength from, her late grandfather. As she said: “I really just wanted to hold his hand.” After Corman’s talk, Hart spoke again, this time presenting on an upcoming project, a comic he is editing based on The Odyssey as well as the experiences of American veterans returning home after serving in Iraq and Afghanistan. The project, commissioned by the Department of Defense and meant to help soldiers dealing with PTSD, is told in two pieces, each with its own style. The stories about modern day marines are drawn in a modern but naturalistic style. The second thread, which tells the story of the mythical Trojan War and the hero Odysseus, is rendered in a slicker, more mainstream fashion. Contributing artists include Jess Ruliffson, Nick Bertozzi, and Justine Mara Andersen. 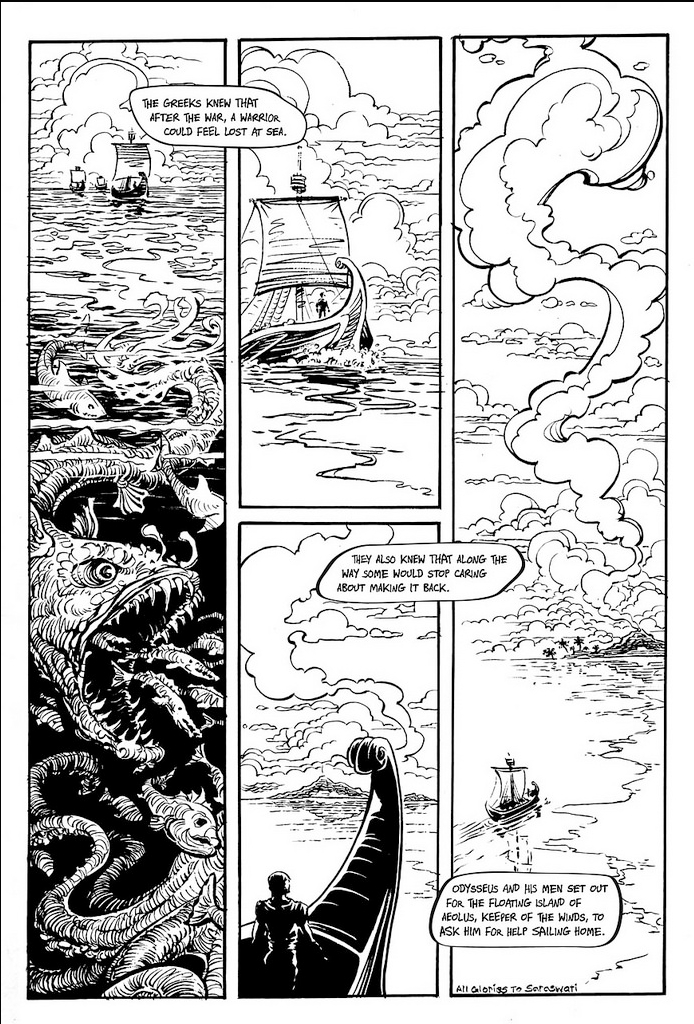 Hart spoke next on his own ongoing comic dealing with the death of his and Corman’s daughter, Rosalie Lightning, when she was just under two years old. The eponymous comic, much of which Hart posts on his blog of the same name, goes back and forth in time, telling the story of Rosalie’s birth, the young family’s exodus out of New York City, of what Rosalie loved, and of her death and the agony of their grieving. The most brutal passages are rendered in swaths of black space. Hart held his laughing baby, the couple’s second daughter Molly Rose, while showing the audience pages from this deeply intimate work, some of which even his wife had not yet seen. It was a powerful reminder of how real and personal both of the artists’ work is, and how trauma, which seemed to be a theme in so much of the work discussed, was not an abstract concept to the couple. Following the talk, someone in the audience asked about the school’s funding and Hart enthusiastically reminded everyone that SAW is a non-profit and gladly welcomes—and largely depends on—donations in order to continue being a refuge for aspiring artists who have a lot of drive, but not a lot of money. Donations are tax-deductible and can be made here.

About the author: Sophia Wiedeman is a comic artist and author of The Lettuce Girl series of comics as well as the Xeric-winning graphic novel The Deformitory. She lives and draws in New York City. You can see her work at sophiadraws.com on her tumblr and follow her @sophiawiedeman on twitter.