Even for a poet the word poetry can come to sound unattractive, even odious, because it can mean not the poetry of ourselves but the poetry written by ourselves as a celebration of what we have made alone and claimed success over — by our own individual skill, craft, and power. But the poetry I admire a lot of the time is a poetry of ourselves, a poetry that seeks to unite and make communion with others. Something Pierre Bonnard once said about becoming a painter seems related. “I had been attracted to painting,” he wrote, “but it was not an irresistible passion. What I wanted…was to escape the monotony of life.” What I think Bonnard is getting at — well, at least what I’m trying to get at insofar as poetry goes — is that through the act of escape a poet must gain mastery over himself or herself and then renounce their own willfulness into the spirit of a poem. Then the poem amplifies a new means and voice of existence to be shared with others. I’m thinking of poetry that surrenders one identity in order to unveil a new identity.

I only read Frances Leviston’s poem “Story” for the first time last week and I’m quite taken with it. The poem begins as a wry search. Then it quickly delves into becoming a rummage and then a hunt for what questions to ask of the unknowable we are perhaps always in the presence of. It’s an illustration of a poetry that seeks to unite what is common among us:

Under what tree, in what part of the forest, beside which branch
of the leaf-obstructed stream, in sun or in rain, 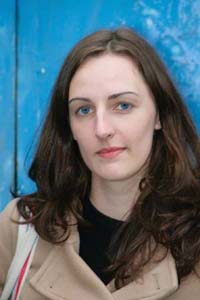 concreted into what foundation, supporting whose house, deaf
to how many dinner parties, subjected to how many holding-forths,

compacted along with what model of car, with what registration,
wearing which perfume and what sort of pearls,

in the back-of-beyond of what country, adjoining whose under-
development land, masked by which strain of animal fodder’s

pollen blown from the next field along, belonging to whom, missed
by whom, questioned by which particular method, scarred where,

repaired where, reopened how, broken how,
how taken care of, transported how, buried

how, in what manner and from what platform disclaimed
during which international crisis, during which electoral year,

the end of the story, the body we need?

Shifting from obstruction to openness, from community to self-understanding, from the present moment to a sense of history, Leviston’s “Story,” as suggested by its title, is a dramatization of shared knowledge. Mahmoud Darwish’s “The Cypress Broke,” translated here by Fady Joudah, surrenders to an image — a broken tree — as the invitation to trust what is seen, to name a thing first before interpreting or debating the interpretations, to feel a thing — like a broken cypress — as life, to share it as it shapes and deforms itself and also us:

The cypress broke like a minaret, and slept on
the road upon its chapped shadow, dark, green,
as it has always been. No one got hurt. The vehicles
sped over its branches. The dust blew
into the windshields … / The cypress broke, but
the pigeon in a neighboring house didn’t change
its public nest. And two migrant birds hovered above
the hem of the place, and exchanged some symbols.
And a woman said to her neighbor: Say, did you see a storm?
She said: No, and no bulldozer either … / And the cypress
broke. And those passing by the wreckage said:
Maybe it got bored with being neglected, or it grew old
with the days, it is long like a giraffe, and little
in meaning like a dust broom, and couldn’t shade two lovers.
And a boy said: I used to draw it perfectly,
its figure was easy to draw. And a girl said: The sky today
is incomplete because the cypress broke.
And a young man said: But the sky today is complete
because the cypress broke. And I said
to myself: Neither mystery nor clarity,
the cypress broke, and that is all
there is to it: the cypress broke!

The shared life in Darwish’s poem is felt in the spirit and concrete world, including dust and birds, neighbors and storms, aging and love, boyhood to manhood to old age to death. Likewise in W. S. Merwin’s “On the Subject of Poetry” we are invited to share what can be comprehended in the world first from listening to a stream that embodies the meaning of time then imagining the consequences of human fear and finally settling on remaining in the mystery of it all:

I do not understand the world, Father.
By the millpond at the end of the garden
There is a man who slouches listening
To the wheel revolving in the stream, only
There is no wheel there to revolve. He sits in the end of March, but he sits also
In the end of the garden; his hands are in
His pockets. It is not expectation
On which he is intent, nor yesterday
To which he listens. It is a wheel turning.

When I speak, Father, it is the world
That I must mention. He does not move
His feet nor so much as raise his head
For fear he should disturb the sound he hears
Like a pain without a cry, where he listens.

I do not think I am fond, Father,
Of the way in which always before he listens
He prepares himself by listening. It is
Unequal, Father, like the reason
For which the wheel turns, though there is no wheel.

I speak of him, Father, because he is
Here with his hands in his pockets, in the end
Of the garden listening to the turning
Wheel that is not there, but it is the world,
Father, that I do not understand.

Notwithstanding what Virginia Woolf once wrote that “beyond the difficulty of communicating oneself, there is the supreme difficulty of being oneself,” these are examples of poetry grounded in the unconscious. Anyone writing a poem knows that you first open yourself and then a poem builds from what you yield. As a poet, you are the carrier of life. Since the inspiration for a poem comes from your unconscious and your unconscious has much in common with your surrounding community and society and culture and histories, you bring a poem into the world for others more than for yourself. When you write a poem you’re hoping to elicit from even one reader some kind of response that goes like this: “Yes, I recognize what you’re saying, and your metaphor releases my spirit.”

If poems are wedded to a culture and an era and a poet’s finite time on the earth, then I think it’s fair to say that a sense of life is renewed when you write a poem that creates and recreates metaphors that transcend your culture and era. You renew life through when you unite metaphors across time. Such as with this restive opening of Philip Larkin’s “Talking in Bed” that goes:

Talking in bed ought to be easiest,
Lying together there goes back so far,
An emblem of two people being honest.

Yet more and more time passes silently.
Outside the wind’s incomplete unrest
Builds and disperses clouds about the sky,

And dark towns heap up on the horizon…

On the other hand, when you overly-privatize your metaphors, when you prioritize the minions of your mind over a connection with others, you risk draining life from your poems. What a poet seeks are metaphors of the mask and dance of shared experience. This is not the same as digging up symbols. A poet knows that symbols are not the same as shared experiences, even if they sometimes suggest it. Likewise, the poetic experience is not the same as a moral or ethical deliberation. The poetic experience is a ritual of communion, an incarnation, a mystery shaped into the vessel of metaphor. Such as when Frances Leviston asks:

And when Mahmoud Darwish says:

The cypress broke like a minaret, and slept on
the road upon its chapped shadow, dark, green,
as it has always been

And when W. S. Merwin writes:

When I speak, Father, it is the world
That I must mention

A poetic experience strives to become a transcendent experience by offering to a reader a metaphor for meditation, a metaphor as a figurative and recognizable shape in the turning of time. Which is not to say that culture doesn’t evolve. It does. And it’s not to say that our understanding of culture doesn’t evolve. It can. It usually does. Being alert to the changes in culture can help a poet move beyond received concepts of experience. Writing a poem is often full of this kind of trouble — and it’s full of searching for shared metaphors to awake from the trouble.