My son used to have a beautiful imagination. But now he is eight and already practical, preferring to read facts about South America and then quiz us at the dinner table as he pokes fun at his younger sister’s “imagination world,” where, he declares, nothing is real. He acts as if he came out of my birth canal reading world atlases. But being a writer, I have taken notes on him all my life, writing down many of the things he used to say, so I have proof how he too once lingered in the fading light of his own imagination world. He used to believe he and his sister were going to live in our house together forever, and he would wear my husband’s shoes, and his sister would wear my shoes, and they would have to give the babies a tour. According to my notes, he used to spend hours in the bathtub, happily slapping the water with his hands, and when I came to wrap him up in his green frog towel, he explained what he had been doing all that time: how Mozart and Beethoven and Bach kept coming over to play music for each other, but they could never all be in the same place because my son only had two hands. It’s hard for him to believe he ever spoke such illogical statements. Nowadays he would point out to his younger self, with some irritation, that Mozart is dead, and your hand is only your hand.

But now I am mostly at the window
watching the late afternoon light.
Back then it never fell so solemnly
against the side of my tree house,
and my bicycle never leaned against the garage
as it does today,
all the dark blue speed drained out of it.

My five-year-old daughter spends a lot of time in the fantastical world that my son has already left. “Did you hear the rescue song?” she asks me. “I was rescuing the baby who was taken by a bird. Actually it was a pony.” Honestly there is so little good here in the practicality of adult life, the mundane never-ending list of details one must process, compared to the illuminated wonder of a child’s imagination. There is so little opportunity to rescue the babies, or the ponies, from the birds. I wish I could tell my daughter to please don’t leave her world. To stay where she is as long as she can. Or at least don’t come any closer to where I am, to where her brother is already headed, to the place where a child, at the age of ten, begins to understand the world holds many variations of unhappy endings, and there is no such thing as magic. In “On Turning Ten,” a poem that has broken my heart, Collins acknowledges what children must give up as they leave behind their childhoods. I suppose they might receive something back in return, but the poem does not deal with this, and I have trouble, in my current state of mind, thinking that whatever is received makes such loss worth it. In Collins’s words:

This is the beginning of sadness, I say to myself,
as I walk through the universe in my sneakers.
It is time to say good-bye to my imaginary friends,
time to turn the first big number.

It seems only yesterday I used to believe
there was nothing under my skin but light.
If you cut me I could shine.
But now when I fall upon the sidewalks of life,
I skin my knees. I bleed.

Putting aside the fact that I love this poem deeply, and that I have sheepishly emailed it out to every mother I know, I have to ask, is this even a good poem? What is a good poem? Many years ago in graduate school, I thought I understood the requirements for good poetry: complicated yet alluring language, multiple layers of meanings, and meanings that must be deciphered then unpacked somehow. “On Turning Ten” does not meet such criteria. But one reason I jumped ship from poetry a decade ago to write fiction is that this question of what makes poetry good finally seemed unanswerable, or else its answer seemed to be always changing. The language of “On Turning Ten” is ordinary. It does not take me hours to decipher, like Dylan Thomas’s “Altarwise by Owl-Light” (“What of a bamboo man among your acres? Corset the boneyards for a crooked boy? Button your bodice on a hump of splinters, / My camel’s eyes will needle through the shroud”). Each time I read Collins’s poem, I do not have new revelations or discover multiple meanings, as I might in, say, the Four Quartets of T.S. Eliot (“Through the first gate,/ Into our first world, shall we follow / The deception of the thrush? Into our first world./ There they were, dignified, invisible…”). But every time I read this poem, it’s like getting a kick in my heart. Every single time. Here. I just read it. Kick. Is it because it is so true? Is it because it somehow contains the unspoken words of my son as he abandons his childhood? Has my definition of a good poem became as paltry as any poem that feels this personal? I do realize, as a child’s spoken voice, “On Turning Ten” is not entirely successful. No child I know speaks like this. But as a child’s unspoken voice, the poem haunts me.

You tell me it is too early to be looking back,
but that is because you have forgotten
the perfect simplicity of being one
and the beautiful complexity introduced by two.
But I can lie on my bed and remember every digit.
At four I was an Arabian wizard.
I could make myself invisible
by drinking a glass of milk a certain way.
At seven I was a soldier, at nine a prince. 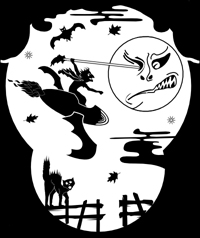 A very enormous part of me doesn’t want my kids to grow up. The fact they are growing up means I am growing old. Just as my son is beginning to lose access to the wondrous beliefs of a child—the belief that there is more to this life than we can see, and that “you have to be so quiet because there are giants up there”—so likewise am I. If my son stops believing that we can board a rocket together and fly alongside witches to where the clouds play a game with the moon, then I have to realize that isn’t going to come true either, ever, and that this reality is all we get.

The whole idea of it makes me feel
like I’m coming down with something,
something worse than any stomach ache
or the headaches I get from reading in bad light—

I find it difficult to imagine a time when my daughter will not see fairies in the trees and wolves under the bridges, but I know it’s only a matter of years, and one day, everyone around me will be as concerned as I am with the mundane details of life. That my daughter will call me up one future afternoon, and instead of telling me about the time she birthed a baby horse—“I was super surprised when she came out of my tummy. I was like…. uhhhh. You said, Why did I get a baby horse? And I said I don’t know.”—she will tell me that the oranges are on sale at the grocery store. Perhaps this is, after all, why I’m a writer, and in particular, a writer who is drawn, on many occasions, to the misty mountains of genre fiction, because for a little while, I get to pretend the real world is not real, thank God, and that there is another better and more interesting reality around the corner, the reality my son once saw and that my daughter can still see, out of reach for me, as I am an adult after all, but close enough that at least I can describe it.

Debbie Urbanski's fiction has been published, or is forthcoming, in the Kenyon Review, the New England Review, Nature: the International Weekly Journal of Science, HTMLGIANT, the Southern Review, The Sun, Tin House’s Open Bar and others. Her web site is debbieurbanski.com. More from this author →