People tell me I’ve got a green thumb. They ask me for tips on keeping their own houseplants alive. Bring them to me when they start to wilt and conveniently never take them back. I’ve started checking out books on botany from the local libraries. I ordered a watering can online, two ribbons of metal for side and top handles. Screw-on nozzle. Tangerine to pop against all of that green.

The truth is I don’t know why they’ve stayed alive, or how, only that it wasn’t any of my doing and was perhaps even against my will. As though I wanted all of this, this spectacle of living… Christmas trees coming in each year, never going out? Instead of leaving them at the curb, my neighbors drag their browning spruces and pines up my porch steps. It’s gotten so I don’t even leave the house after the 25th, just park my car in the garage and close the shutters. Tight. Pretend that I’ve taken a trip to see family. Sunlight or no sunlight, it’s no matter to them. Somehow, they keep growing.

I go for walks in the morning, try to get out of the house, absorb my vitamin D in non-chewable form. I’ve taken to smoking indoors, trying to cancel out all of that excess oxygen they’re producing. The way I see it, that much oxygen can’t be good for the body. Shannan says it’s invigorating, says that maybe she wouldn’t be so lonely if she just caved and bought a ficus. I offer her one of mine and she says she couldn’t do that to me, sets her empty glass in the sink before heading back down the street. I don’t tell her she’d be doing me a favor, that barring feeding them through a wood chipper, I have done everything I could think of to keep them from staying alive.

What I’ve done: starved them of water, of fresh soil, of sunlight. Tucked them away in closets or in suitcases if they were small enough. I’ve overwatered them. Let aphids pick away at their leaves. Vases filled with dirty water. I’ve turned the heat up on them. Tried to freeze them out. At my lowest, I hauled them all into the backyard during a hailstorm, but once their leaves had dried, I carried them one-by-one through the sliding glass door, each philodendron, palm, and violet. Every fern and succulent. I returned the spider plants to their corners, the Gypsophila to the bedside table. The geraniums appeared to be clustered tighter, but relaxed in time.

What I haven’t done: buried them or set them on fire. Dismembered them, though I will admit to trimming their branches back farther than I should have, like slipping and cutting a dog’s nail down to the pink, only I didn’t slip.

Shannan is the only person who has me over for dinner. She’s terrified of the water, so other things we don’t talk about are windsurfing, deep-sea diving, and sharks. Fish are okay because Shannan keeps foil pouches of tuna in her cupboard for when she doesn’t feel like cooking. Things we do talk about are homeowner’s fees, cottons versus synthetics, and a mutual dislike of sautéed onions. 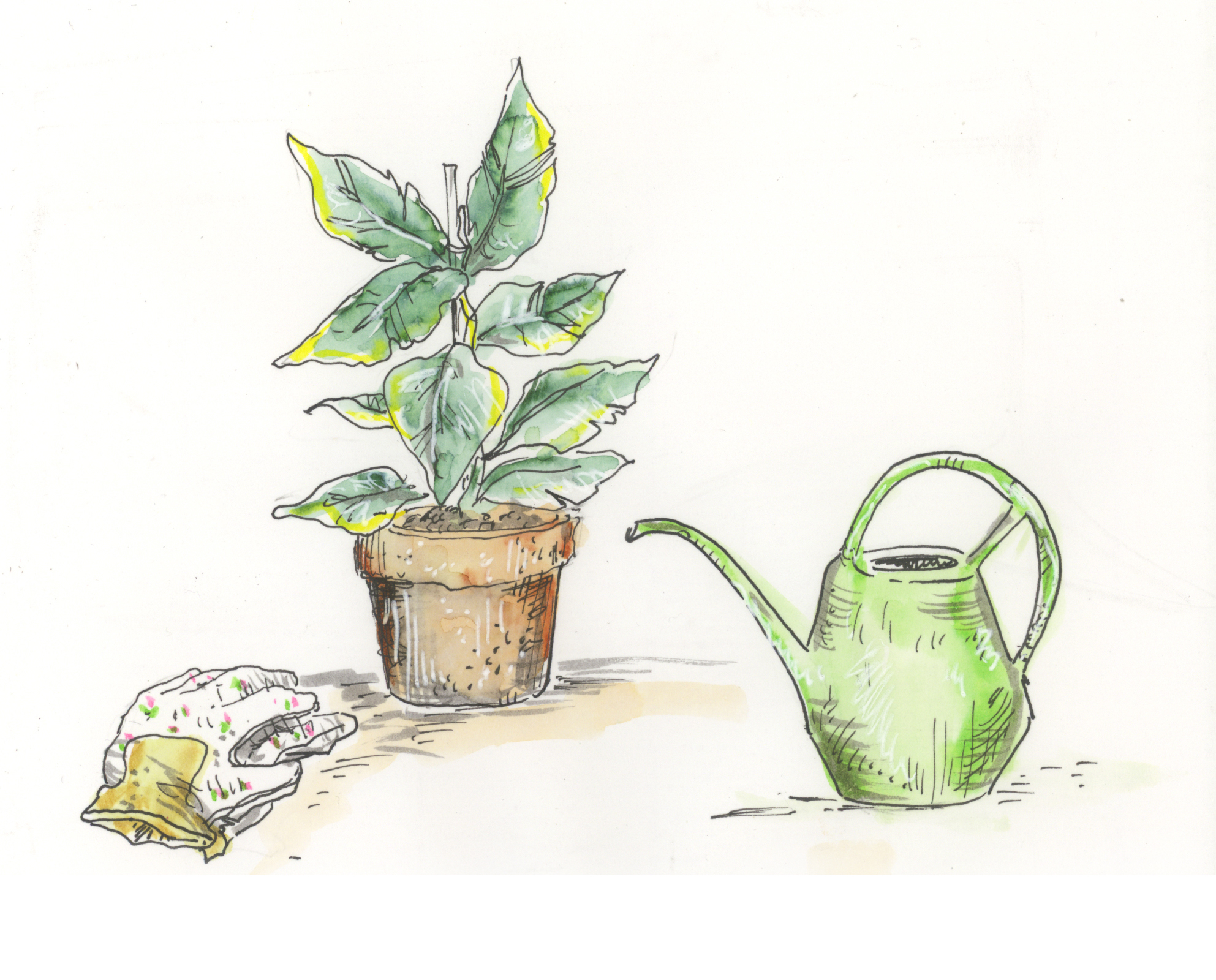 The plants have become my claim to fame. Whoever draws my name for Secret Santa can breathe a sigh of relief. A no-brainer. After work, I sometimes find packets of seed tucked under a windshield wiper. I can’t be sure if it’s a co-worker or the universe soliciting me to grow, whispering, “You have a knack for keeping things alive” as I unlock the door and bow inside. I draw the line at outdoor gardening. Through the window, I watch as the neighbors walk past, pushing strollers, or pulling at their children’s leashes. If only I’d been gifted a cat, or a Mercedes, or even a box of Zingers. Instead, when the baby was born, it was Gypsophila—baby’s-breath—and sunflowers, and a fern. And when the baby died, it was prickly wreaths, and roses with soft peach petals. Before I could protest, my husband had loaded them all into the car to take home with us. What really got to me was the wreath; I wasn’t sure if I was supposed to hang it up.

Shannan moved into the neighborhood a few months after, when it was just me living in this house. She didn’t know the first time she stepped inside that it is in truth a mausoleum. I’d offered to give her a tour of the neighborhood. We’d gone as far as the mailboxes and back before I invited her in, if only because I knew that the others were dying to see. Just once, I confided to her, it would be nice to be truly alone. She said that I couldn’t mean it. That it’s so hard meeting people around here, and I should be happy to have so much company inside these walls. She said she was thinking about getting a ficus. She said that she was nearing thirty and starting to get worried over babies, and was I?

I look online at gardening hats, settling on brown straw adorned with an ivory flower. I start wearing it into work, which is against company policy, but there are no reprimands, no memos left on my walls, no discreet emails. So the following week, I arrive at work with my blouse tucked into corduroy overalls. I still have my hat, of course, and still no one comments except to ask about my plants.

“They’re doing wonderfully,” I say. “I’m thinking about adding some marigolds.” This gets them excited. People like specifics, facts that seem to verify themselves.

What happens is Shannan is slowly inducted into the cult of the neighborhood. I only wanted one precious thing. She doesn’t ask questions, though, doesn’t remark on the truths we both know she has been made privy to. We eat our dinners together in small, deliberate bites. I begin leaving doors open. She doesn’t comment on the irony: from nursery to nursery, the rosebud trim along the walls peeking out from behind the tallest of the trees. She doesn’t reach out to rock the succulents. What she does is she starts to sing. I can’t be sure, but it sounds like a lullaby. She says it’s good for them, she read someplace. Helps them to thrive. But then I must already know that. As far as I’m concerned, it’s something people who live alone have come up with so that they have something to talk to other than the television set. But that isn’t what’s bothering me. It’s that I’ve realized I can’t remember a single lullaby.

Next are the galoshes: shamrock green. Periwinkle blouse, beige corduroys. I look like springtime, everyone agrees. Soon I’ve added a pair of gloves, brand new, but stomped in the dirt for authenticity’s sake. Now, when I type my reports, flecks of earth get caught in the rows between keys. I ignore the emails from Shannan, instead typing how to braid your hair into the search engine and clicking through the tutorials. At home, I try each in front of the mirror, and again with the hat, ultimately opting for a side fishtail. No one can say that I haven’t committed.

What happens next, though, is the football guy starts showing up in jerseys, and the birdwatcher comes in with a pair of binoculars around his neck. Everywhere I turn there’s crocheted sweaters and handmade earrings and running shorts and, on one arm, a Falconry glove. I picture Shannan singing to the plants. I see my husband childproofing the house, plugging up electrical outlets like he was doling out binkies. I remember how he didn’t even move when he had a bad dream, just frowned. How I finally I came home to find that he wasn’t there, but had refilled the ice trays and given the neighbor boy a stack of $5 bills and the key to the shed. Just keep the lawn looking presentable, he had told him. Always thinking ahead. And then I think of the Gypsophila, and I can almost smell the top of a bald pink head. Almost.

At the office, it’s announced that I am to be named the very first employee of the month for bringing individual spirit back into the corporate environment. I am presented with a certificate and a garden hose tied with an ivory ribbon to match my hat. Mary from HR—“POLLY PUNCH” according to her Roller Derby gear—gifts me a set of kneepads matching her own. I run my fingers over the stippled plastic, thinking that the whole world has gone mad. They give me a double-lunch and I drive straight home, steering with my knees as I tear off my gloves, sending them out the window along with my hat. I drive barefooted, my galoshes standing empty on the passenger side floor. I stay inside my overalls only for propriety’s sake.

When I pull into the driveway, Shannan is seated on the porch with a baby ficus between her knees. Several of its leaves are scorched, broken, littering the pot. My hair still loosely braided, I smooth down the fly-aways. I reach for my galoshes, insert my left foot, then my right.

“Please,” she says, and together we go inside to make room.