I met my first love in college. He wore beat-up windbreaker jackets, spoke with a Boston accent despite being from Detroit, and wanted to be an engineer and build bridges. We went to a large public university in the Midwest where a lot of people wanted to be engineers and build bridges, so this made sense. I wanted to be a painter, despite having never painted anything. First Love said that I needed to make a lot of bad pictures before I could produce a good one, but I just wanted to skip to the end, when he and I could stand together in front of the finished piece: he would say something nice and I would smile, because I would always take a lie over nothing at all.

We met in a dorm hallway, half past midnight. I thought he had a goofy face and hair that was too long, if we’re being honest, but he was a good talker. We talked about David Bowie and Ender’s Game, about beer and outer space. I didn’t know he was gay, not at first. It took time to read him, to turn his pages and arrive at that twist—if it could ever be described as such. If our gayness was not, in fact, the whole book.

His room was a few blocks away, in a drafty building from the ‘70s. There was a poster over his bed, a redwood forest scene recast with neon colors. That first year, while First Love ran downstairs to forward his darks or get a diet pop from the vending machine, I would sometimes sit on his bed and stare into that neon forest. It reminded me of something you might find in an old hippie’s basement, and sometimes we would get high and stare at it for a long time, often longer than we realized. Years passed. He was staying for a fifth, so I stayed, too. We moved into an apartment with high ceilings and a loud radiator. I liked it. For cash, I was still working at the campus bookstore, moving my hands along the cashier counter in slow brushstroke motions, making pictures that weren’t there. When we had sex, First Love would click on his desk lamp and turn off the overhead bulb, and all I could ever make of him was his indistinct silhouette, a dark outline. My eyes would wander deeper and deeper into its contents, unsure where the reality of his body ended and my imagination filled in the rest. A strange thing, given that his weight on me, there in the half-light of our bedroom, was the realest thing I had ever known.

I wouldn’t see him again until years later, around the time I was dating the Writer. I lived in a fourth-floor walk-up in Bushwick, trying to sell paintings at any coffee house or Puerto Rican restaurant that felt enough pity to put them on their walls. The Writer, blond and inscrutable behind his horn-rimmed glasses, thought they were “really lovely.” Really lovely. The neighborhood was still cheap enough that I could get by working at a cramped bodega and, if I was short on rent that month, picking up shifts at a cafe around the corner. My dad had died and I was depressed, keeping the vastness of the hurt largely hidden, even from the Writer; he tried to compensate by loving me more than I loved myself. I thought it made me somebody, to live in New York, but that thought seems basic now—I was still sad, regardless of how expensive my rent was. It was during this time that the Writer introduced me to his friends, other artists trying to find gigs, talking about Basquiat and Iraq and the middle-of-nowhere towns they had left behind. Really lovely. We drank a lot of Maker’s Mark.

First Love came into the bodega on an overcast Friday morning, when men in orange were driving around to pick up the garbage. The cherry blossoms up the street had been blown off the branches, lining the gutters and doorways of the whole block. He swept in, heading towards the back wall of refrigerators, and I watched from the register as he balanced butter, eggs, and orange juice in his arms. His hair was shorter, his cheeks leaner. When we finally made eye contact, it was like looking at a museum exhibit, at something familiar that you can’t remember the name of, and the tour guide’s voice drifts into your ear: here we have the evolution of man, from single-celled organisms to homo sapiens or rather, homo sapiens sapiens. The animal that knows and knows it knows.

His cousin lived three blocks away, he said. Cousin Dina. Hadn’t I met her at some point? A wedding, maybe? He was just in town for the weekend. I don’t remember what I said, or if I smiled even. I was back in our old bedroom, seeing my suitcases on the bed, listening to the radiator click along as if nothing had happened.

I slipped out from behind the counter and we hugged. For some reason I can’t recall, we exchanged email addresses.

He walked away. I went into the back hall and wept.

Another year passed. I had broken up with the Writer, and pictures of him and his friends at someone’s summer house in Montauk filled up my Instagram feed. Another year, and I took up with the Architect. Eventually we moved in together, and I promised myself that it would be different this time. Rainbow flags were flying, that “Same Love” song was on the radio. Gay marriage was legal in New York, and the Architect wanted to be my husband. He would have built me so many beautiful rooms, if only I would say “yes.”

For whatever reason, First Love initiated contact once more. Short, one- or two-line messages, and I would reply—performatively, at first, but with increasing ease. Both of us began writing longer and longer responses, paragraphs upon paragraphs. He left emails in my inbox, and I left my keys on the Architect’s nightstand.

The animal that knows and knows it knows.

My mom loaned me money and I moved back to Madison for grad school. I did some painting and got a local gallery interested. Fourteen paintings, portraits of Brooklynites. They seemed like appropriate vestiges of a past life, one worth remembering but maybe not reliving. I worked bright yellows and blues into the designs, outlining them in thin electric strokes. I don’t know if they were any good, or if they served any greater purpose. Looking at them was a little like looking deep into the neon forest poster all those years ago, I guess. Some might say I was looking for First Love all along, but that’s a little too precious, right? I liked them, and maybe that was enough.

First Love said as much, holding my hand the night of the gallery opening. I looked down at the floor and smiled.

He had managed to say something nice. 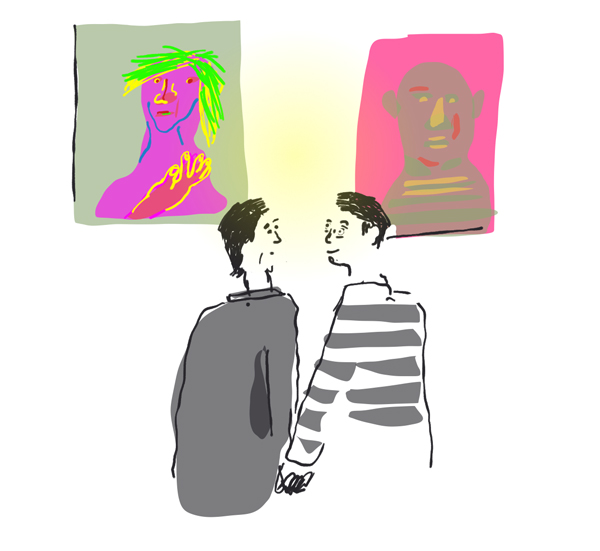 Jeremiah Moriarty is a writer from Minnesota. His work has previously appeared in Hobart, Wigleaf, Necessary Fiction, Cosmonauts Avenue, Wildness, and elsewhere. He lives in Minneapolis and tweets @miahmoriarty. More from this author →