At one time, John Stanley’s Little Lulu was the best-kept secret in comics. Like Carl Barks’s Donald Duck, Lulu was considered significantly better than the reams of dull comic books based on licensed properties printed throughout the 1940s and 1950s.

By the 1970s, the secret was out. The snot-nosed kids who read comics on their parent’s front porch were now fully grown adults, congregating at massive comic book conventions to discuss their favorite creators. It was then that Stanley emerged as one of the preeminent comic writers of the post-war era.

Although Stanley helmed a number of well-known characters over his career (Nancy and Raggedy Ann, among others), and created a bevy of his own, most of his fans agree that it is in his work on Lulu that his unique sensibilities shine brightest.

This work has recently been collected in two volumes from Drawn & Quarterly. These two thick books (the first in a planned series), titled Working Girl and Fuzzithingus Poopi, collect Stanley’s earliest work on the title.

Working Girl  features stories predominantly drawn by Stanley himself, while Fuzzithingus Poopi picks up when artist Irving Tripp took over drawing duties. Stanley famously didn’t care for Tripp’s pencil work, calling it lifeless, but it’s unlikely that casual readers will notice much of a difference.

While I prefer the artwork in the first volume, I don’t think Stanley’s criticism is fair. Tripp’s simple but solid line work perfectly underscores the dry humor of Stanley’s writing. Sure, people in Lulu get bopped on the head and take plenty of pratfalls, but we’re always left with the impression that these are flesh-and-blood children rather than elastic cartoons characters. In a Stanley comic, you’re more likely to get big laughs from a simple reaction shot than you are from a slip on a banana peel.

Both the author and artist are able to achieve this effect because of the great character writing in Lulu. It reads like a television sitcom in which the children have unique, identifiable personalities.

Lulu herself is good-natured, creative, and strong-willed. Her confidence and determination have recently led her to be considered an early feminist icon of comics—a notion that is highlighted further by the series’ abominable co-star, Tubby. Any way you look at him, Tubby is a pretty awful little boy. He’s inconsiderate, sexist, and not particularly bright, but he has an ego so large that he never seems to notice these truths about himself. He’s kind of a prototypical version of Cartman from South Park. His primary purpose—apart from providing a foil for Lulu—is to encapsulate what’s wrong with the “boys will be boys” perception of masculinity. The “no girls allowed” sign that adorns the male characters’ clubhouse might look innocuous when it’s plastered onto a cheap wooden shed, but it’s considerably more troubling when we consider that it extends to the schoolyard, the workplace, and yes, even to the White House.

Make no mistake, though; it’s the boys’ prejudices being parodied here. They always lose out, and not because Lulu is an exceptional girl (she’s not; in fact, most of her victories are more accidental than they are purposeful). Instead, they are proven wrong just by being, well, incorrect. For example, in a battle-of-the-sexes story typical of the series, the boys are preparing for the local boxcar race and are appalled to learn that Lulu intends on racing. Obviously, a girl cannot build a decent boxcar, let alone race one. The boys dismiss the possibility of her winning. But, of course, despite losing her vision early in the race (it’s a long story), she still manages to beat the boys. Annoyed, the boys accuse her of having her father build her boxcar for her. It is then revealed that it wasn’t her father that built the car—it was her mother.

What I find refreshing about this kind of story—and there are many more like it to be found in these volumes—is that it doesn’t fall prey to the “exceptionalism” trope found in books and movies like Hidden Figures, Mulan, or even Uncle Tom’s Cabin, if you want to go back that far. These narratives of exceptionalism seem to suggest that to find one’s place among the “elite”—the boys, the rich, white people—one has to earn her place by being considerably faster, smarter, better. As fun and heartwarming as it might be to watch these characters fly in the face of oppression, that isn’t what equality looks like. Equality means that everybody must be treated with respect and dignity, regardless of whether or not they have any preternatural ability.

While these Tubby and Lulu/battle-of-the-sexes stories serve as the bedrock of the series, it’s not the only recurring feature. The books are also filled with a number of comics in which Lulu concocts improvised stories for the neighborhood’s young pest, Alvin, who frequently demands them of her.

These tall tales might feature doppelgängers of Lulu, Alvin, Tubby, and other characters in the comic but they are not bound to the continuity of the series—or even to the confines of its reality. These wonderful, absurdist tales often feel like they would be better suited to a Little Golden Book than a ten-cent comic. 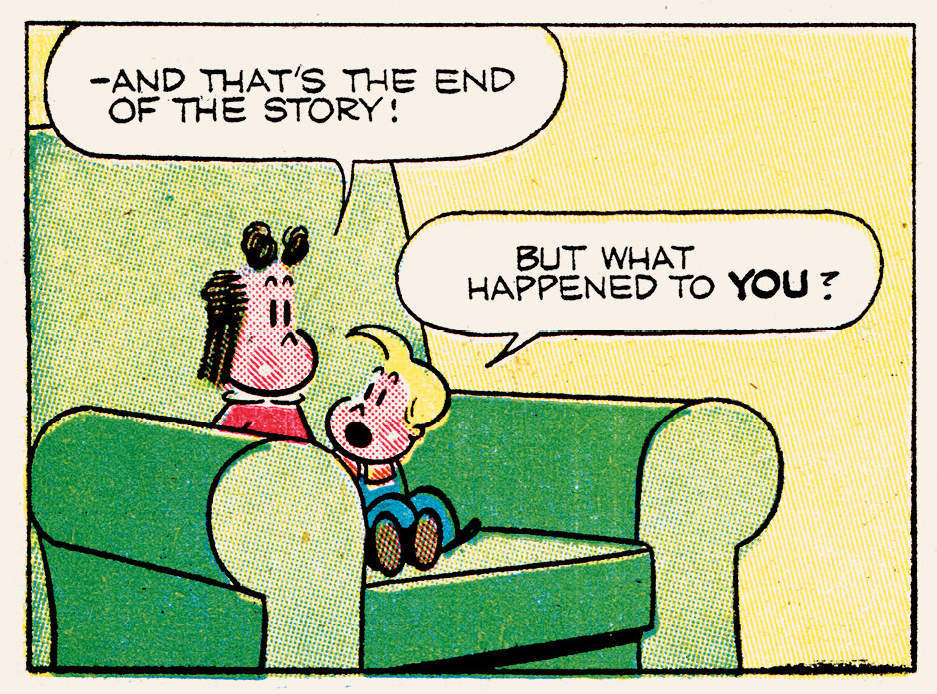 Another unique feature of Little Lulu was the “Lulu’s Diary” section. These are pages filled mostly with text (a postal requirement at the time of publication in order for comics to be considered “magazines,” and therefore eligible for subscription). But, unlike the uninspired text pages tucked in the back of Little Lulu’s contemporaries, Stanley saw these features as an opportunity to get inside of his title character’s head, and to write from her perspective. The majority of these stories could’ve made for great comics themselves, but instead we get them entirely from Lulu’s perspective, rife with misspellings, grammatical mistakes, and run-on sentences. Additionally, Stanley fills the borders of these pages with illustrations said to be drawn by Lulu herself. These misshapen, impressionistic drawings complete the effect and provide context for the stories.

These hardcover volumes by Drawn & Quarterly are not the first reprints of this material. But, to my eye, they are the best. Each book features a celebrity introduction, approximately two hundred and fifty pages of comics, a collection of covers, and an essay by comics historian Frank Young. Each book mimics the format of the comics themselves, reprinting a classic drawing with a new border design reminiscent of the series’ original covers. The elegant design throughout each volume elevates the material while also remaining true to its roots. This is especially evident in the decision to reproduce high-quality scans of the original printed material, in all of its sloppy, three-color glory (though I’m suspicious of a couple of the Tubby pantomime cartoons in the second volume—those look digitally colored to me). I don’t mind it, though it might prove to be a slight barrier for young kids who’ve never had their fingers darkened by cheap newsprint. Drawn & Quarterly could have easily hired a colorist to modernize the look (Fantagraphics did an excellent job of this with Peanuts), but I imagine their core audience of comic-book purists might have balked.

The choice of celebrity introductions for the volumes released thus far have been remarkably astute, framing the series as a work that celebrates gender equality. The first features an essay from Canadian author Margaret Atwood, and the second has a blurb from poet Eileen Myles. Both writers discuss growing up with Lulu, and seeing their own childhoods reflected back at them in her character. 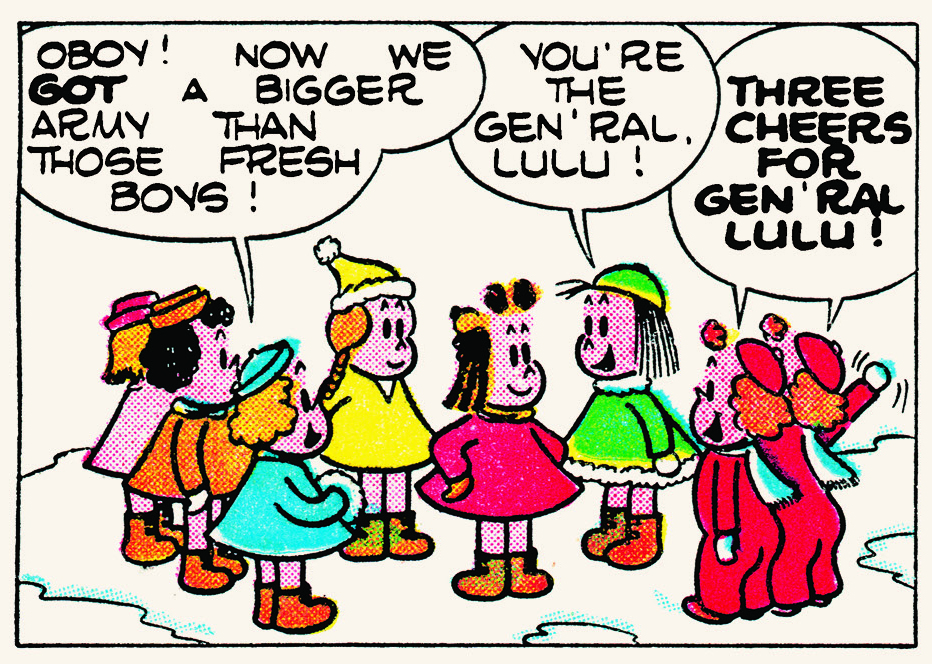 John Stanley went on to do a number of other great titles during and after his stint on Lulu, but most agree that the series is probably his masterpiece. He left the comic industry over a royalty dispute in the 1960s, and subsequent interviews paint a picture of a man who had little interest in, or respect for, the medium.

Still, he managed to produce one of the greatest oeuvres of any writer in the field, and some of his best work can be found in the pages of these two volumes. Stanley himself could not have asked for a better presentation. (Although, by most accounts, he probably still wouldn’t care all that much.)