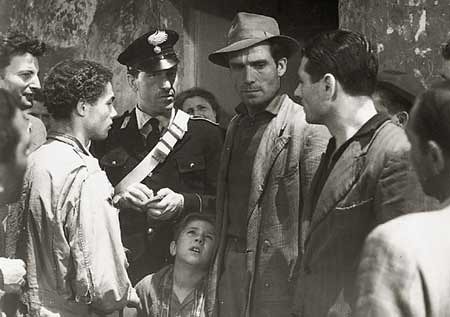 I mentioned in my inaugural post that I’d recently watched The Pursuit of Happyness starring Will Smith. The movie is about a man who struggles to support his family as a salesman of bone density scanners in San Francisco. Business is slow, and he finds himself in increasingly dire economic straits. He decides to apply for an internship at Dean Whitter in hopes of becoming a stock broker. This is a popcorn movie designed to tug my fatherly heart strings. It mostly worked.

But the film I kept thinking about while watching this Will Smith vehicle was Vittorio de Sica’s Bicycle Thieves. For a long time Bicycle Thieves was synonymous in my mind with European art house cinema in general. It’s the kind of movie dudes in beer commercials snicker about. When I finally saw it a year or so ago, I yearned for more movies about people on the economic knife-edge of society.

The Pursuit of Happyness tries, I think, to be sincere and honest in its politics, and at times plays blatant homage to Bicycle Thieves. Take the scene in the pizzeria where Smith’s Chris Gardener and his real-life and on-screen son glance over at a table full of kids enjoying themselves. Compare this to the restaurant scene in Bicycle Thieves where Antonio (Lamberto Maggiorani) orders his son a mozzarella sandwich as they both watch a gluttonous youth gorge himself at the next table. This has to be intentional—the director of The Pursuit of Happyness is an Italian named Gabriele Muccino. I’m guessing it’s impossible to be an Italian film director without having seen Bicycle Thieves.

But there’s a big difference between de Sica casting his movie largely with non-actors in the years after his country’s economic collapse, and Muccino casting one of the world’s biggest stars in a movie filmed in the years before the collapse of America’s economy. It was hard for me to watch The Pursuit of Happyness without thinking of the character as “Will Smith” instead of “Chris Gardener.” As in, “Will Smith is doing a pretty good job portraying an impoverished guy with dignity.” This was a movie hurt by its own star’s star power, the sheer wattage of Smith’s tabloid iconography overpowering a film about dim prospects. There was no disappearing into a character here, only the Fresh Prince’s usual charming demeanor and furrowed brow for Serious Mode. In the end, I enjoyed it, but for a movie based on a true story, I didn’t buy it.
By the way, according to IMDB Pro, Bicycle Thieves, since its U.S. theatrical re-release in 1998, grossed $332,930. As of February 2007, The Pursuit of Happyness grossed $162,586,036 in the U.S. alone.