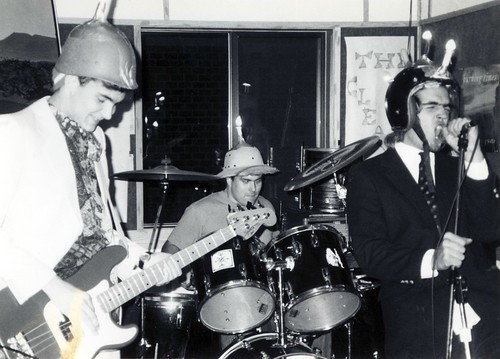 My old friend Nate sent me this picture yesterday, taken some 17 years ago. That’s me in the middle, playing drums, wearing a pith helmet onto which is adhered a lit candle. The guy playing bass to the left is today one of the chief economists at the Federal Reserve, formerly an advisor on global economics to Alan Greenspan. The guy singing is now a tour manager for bands like the White Stripes, MIA, and Cold War Kids.

I’ve been sort of marinating in nostalgia these past couple days, poring over this and even more incriminating photos of my college years, which got me thinking about a beguiling 2006 film called Old Joy by Kelly Reichardt. More than any other movie I can remember, Old Joy captures what it feels like to be a dude of my vintage in the Pacific Northwest, taking a road trip with a bud to the Cascades, shouldering the responsibilities of a career and a family while maintaining a tenuous connection to the cool person you used to be. Old Joy made me sad in an almost happy way, if that even makes sense. I guess I mean to say it’s bittersweet.

It just so happens that Michelle Orange left a friendly comment to my post about Bicycle Thieves, recommending Reichardt’s new film, Wendy and Lucy, starring Michelle Williams. Here’s a review. I’m adding it to my Netflix queue. Incidentally, I see that Wendy and Lucy is being released by Oscilloscope Laboratories, a studio either owned by or just associated with MCA of the Beastie Boys. MCA’s debut basketball documentary, Gunnin’ for that Number One Spot came out recently as the company’s first DVD release. That photo at the top of this post was taken around the time the Beastie Boys released Check Your Head, which was on heavy rotation the summer I shared a house, and wore candles, with those other fellows.