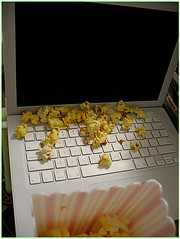 My brother-in-law Chad Johnson’s popcorn recipe is the best. I’ve enjoyed it at his and my sister-in-law’s place over the years while watching Pulp Fiction and during their rigorously opinionated James Bond sessions. I don’t know if he got the recipe from somewhere else, but in our house my son calls it “Uncle Chaddie Popcorn.”

When I met Chad years ago, he was wearing a T-shirt with a picture of a dreadlocked George H.W. Bush under the words “The Dreaded Republican.” His popcorn is equally leftist. If you’re the kind of person who reads Naomi Klein and don’t shave your nether regions, this is the popcorn for you.

The proportions of the ingredients are really your call. As with most things I cook, I eyeball the ratios. The following is really just a rough guideline of what should be included in the recipe. You may find you prefer one ingredient to stand out more than the others. Anyway, here’s what you’ll need:

Start by thoroughly coating the popcorn with the butter. Then sprinkle on the Bragg’s. Last, sprinkle on that nutritional yeast, you freaking hippie. Mix well. Eat it while watching Alice’s Restaurant.

Uncle Chad has an even more hardcore version of this recipe, which involves sautéing a couple cloves worth of minced garlic in the butter. I only recommend this version for those who find Obama’s cabinet selections too centrist.