Last Friday I was laid up with some kind of nasty stomach bug that left me prone most of the day. What better time than to revisit Lord of the Rings: The Fellowship of the Ring? It was literally the first thing my hand fell upon when I nauseously pawed at my DVD cabinet looking for something undemanding to watch. 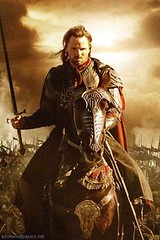 Is the surge working?

It was hard not to watch LOTR again without experiencing another, political, kind of nausea, as the trilogy will always be linked in my mind to the run-up and launch of the Iraq war. I’m certain Peter Jackson set out to make a kickass, 12-hour film spectacle and couldn’t have predicted the winds that would be blowing through American culture on its release. The trilogy was released on three consecutive Decembers from 2001 to 2003. The first episode arrived in theaters a little over a month after 9/11. The second (coincidentally named The Two Towers) appeared while the drum beats of war echoed loud, shortly after Bush requested “all means that he determines to be appropriate” to launch the war. By the climax of The Return of the King, the war was in full swing.

The LOTR trilogy was a smash hit, appealing to critics and audiences across a broad demographic swath. It was easy to watch it as allegory and simply switch out the names of the good guys and bad guys to fit your political leanings. To me, the Bush administration was Sauron’s forces, but conservatives just as easily could have looked at the orc hordes as fantastical embodiments of the terrorist boogeymen Bush relentlessly invoked.
Watching The Fellowship of the Ring in the last days of the Bush administration, my body aching and head pounding, I wondered if what will date it most is the fundamental good-vs.-evil dynamic that provides the movies with their drama. Yesterday, recovered from my illness and watching the inaugural address, I gasped when President Obama addressed the Muslim world like a mature adult who appreciates the world’s ambiguities rather than casting every conflict in “with us or against” Manichean certainties. I wonder what cinematic spectacles will come to be thematically entwined in this bright new age?