There is so much brilliant analysis of the inauguration, I figure why add to the mix? Why dissect an already dissected frog? I’ll just write down what I did on this historic occasion.

We got up at 6 a.m to watch the swearing in with Eleanor. “What’s African-American?” she asked.

It was like playing charades. I just made gestures at the television. (I later asked my friends how to explain. They said: “You say he’s black.”
Oh.)
Then we watched the speech (which proved again that prose is better than poetry). Then I took her to school, went to Morning Brew to work, inspired to dust myself off.  Then I came home to watch more t.v.

That night we went to an inauguration “ball” where we greeted hope and new beginnings with a keg and fish tacos. I do not like being asked to wear a gown, write a check and then be given a plate of cod rolled into enriched flour dough, but enough. Change, renewal, sacrifice, and nothing could be as unfortunate as Aretha Franklin’s bow and awkward phrasing of “Country.” Tip. When you sing, ‘country’ do not pause between the ‘count’ and the ‘try.’ It’s an old Chinese proverb.

God I’m hung over. There was wine, too–a good mother’s drug of choice. At one point while pouring myself a hearty glass of Twin Fin merlot some dude said, “What’s the vintage?”

“Are you relieved? Nice dress.” 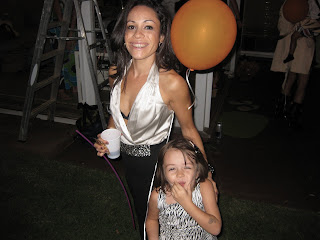 I looked around for my daughter–she’s like a badge that says, “Move along, tool,” but she was across the yard with her buddy, playing with his dad’s iphone. This is her friend who taught her that Martin Luther King got shot by a bad guy.  Yes, we brought her to the party. I thought it would be cool if the family was all together on a night like this, and we bring her with us everywhere anyway, even to fancy restaurants because that’s how we roll. I like how Cheney rolls, too.

“It’s such a nice night,” the tool said.

I looked for my other badge, my husband, but he was pumping the keg, his back turned to me. He later said that he didn’t interrupt because he wanted to see his game. Then I sat down and ate a few tomatoes. I participated in a brief discussion about scurvy. Supposedly it’s back, like flannel (which isn’t actually back, neighbor up the street). What if consumption comes back, too? Or the plague? An older gentleman in a tux explained scurvy, the plague and consumption.

“Are you a physician?” P asked.

“I learned it from watching NCIS,” the man said, which is pretty much the same thing I said. I observed that all the Punahou people were at my table. Practically everyone at our table had received a diploma from Dr. McPhee, the same man who handed Barack his diploma. The woman next to me was Obama’s classmate, but I tuned out when she talked because she didn’t smile and I could tell she was preparing what to say next whenever I spoke. I don’t like that. I like improv. Anyway, about Punahou, about Hawaii. Our table discussed that we’re all very aware that we’re trying to claim Barack in some way, as if by going to the same high school means something. But it does, right? It’s a neat fact, right? And our town, Kailua, could very well be the next Ranch. The ‘shaka’ could be the next fist bump. Let us have our claim.

And that’s that. We drove home on a cold Kailua night. We put our daughter to bed–she insisted on sleeping in her party dress. Then Andy and I retired to the bedroom and dissected the frog a little more (no, that’s not a sexual position–I’m referring to inauguration analysis). We talked, we laughed, we reflected. Then I watched TMZ.

I'm Kaui. Mother of one, author of House of Thieves, The Descendants and the blog, How to Party with an Infant. I live in Hawaii. I'm working on another novel and child. More from this author →