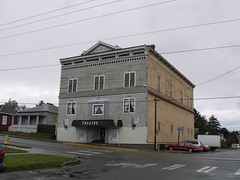 Port Townsend, Washington has two superb theaters, one called The Rose, the other The Uptown. By superb I mean they’re in old buildings, they don’t show commercials, the popcorn is served with more or less real butter, and the marquees bear the names of international films and Oscar-worthy mainstream pics. Last week I caught Gran Torino at The Uptown with my friends Matthew and Michael, both poets, both of whom hated the film. Michael recently blogged eloquently and with distaste about it.

I could spend a couple hours watching Clint Eastwood scowl, which he does aplenty, even delivering a line that rightfully belongs to John McCain: “Get off my lawn!” (Honestly, he really does say this.) Clint plays a widower named Walt who befriends the family of Hmong immigrants next door. Confrontations in a racially monochromatic Detroit ensue, Clint does a Dirty Harry imitation, and epithets are delivered with the post-PC air of semi-ironic bigotry. Frankly, I found no offense in the wop-gook-pollack tirades of this octogenarian lawn care enthusiast. Whatever. What did offend me was how the supporting cast of non-actors did a lot of non-acting. 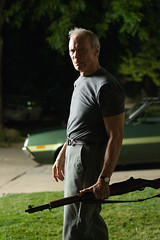 Bad acting tends to turn a film into a meta viewing experience. The mind wanders toward speculation about what the director was trying to achieve, what he must have thought while enduring a scene of forced pathos. With Gran Torino, Eastwood was riffing once again on his theme of how to manage man’s capacity for violence, how to mitigate it or confine it within a moral framework that limits its chaotic spread. His character Walt, who comes across like every other Eastwood character coiled into a bitter and prickly ball, is resigned to martyr himself, and Eastwood the director seems equally resigned here. Screw it, he seems to be saying, this movie doesn’t have to be perfect, it just has to say that VIOLENCE IS BAD STUFF that shouldn’t happen to GOOD PEOPLE.

Gran Torino reminded me in a lot of ways to the Michael Douglas vehicle Falling Down, which was also about a surly white guy muddling through multi-cultural America. Both are films that strain to tell us that bigots are, deep down, just decent guys who want stable jobs and can be won over with a hot meal. Gran Torino is a movie made for all those Republicans trying to make sense of Obama’s America, phobic of the otherness of immigrants, willing to give those same immigrants the benefit of the doubt as long as they pay heed to good old American values like hard work and tasteful landscaping.

After the show, I popped in a DVD of bonus features included in a Sergio Leone boxed set and watched Eastwood commenting on the stylistic panache of the legendary Italian filmmaker. The interview footage was shot maybe ten years ago, and in it Eastwood comes across as happy, cheerful, at the top of his game. If Gran Torino is his last film, or is the last film in which he stars, the obit writers will cite it as his swan song, a “fitting end to a legendary career.” But to really celebrate the man with the squint, I’ll take The Good, the Bad, and the Ugly any day.

As if to challenge this vision of man’s solemn mastery over the ways of violence, the day after Gran Torino I watched a documentary on Kubrick’s A Clockwork Orange. Devoid of anything resembling human warmth, Kubrick’s masterpiece says something more terrifying about our compulsion to wage mayhem and even worse, to enjoy it as entertainment. Where Eastwood returns again and again to the saving grace of human decency, Kubrick asks if redemption is even possible once we’ve unleashed the monstrosities hiding in our limbic systems. One can only image how Dirty Harry would have taken to Alex and his merry band of droogs.