The author remembers his time with Joe Strummer and reflects on the band’s definitive new book, The Clash.

“I wanted to be Pete Townsend, the bloke who throws his arms and jumps up and down.” Paul Simonon

2008 is the 30th anniversary of American release of The Clash’s self-titled first album, at the time the highest selling import in American history. To celebrate, the former members of the Clash have put out a new coffee table book simply titled THE CLASH. Here, packed in tight between bright pink covers, is the Clash’s story told in their own words with stunning photos and original art. With its reflective documentary-like presentation, the book presents a unique moment in history that was The Clash.

The book is at it’s best when it recounts how the band grew from the various musical influences they soaked in, internalizing them, making them their own (Dylan, Johnny Cash, Duke Ellington are some examples of artists who did the same). But the band’s musical career lasted less than a decade, with only five of those years with the lineup that mattered: Joe Strummer on guitar and lead vocals; Mick Jones on lead guitar and vocals; Paul Simonon on bass; and Topper Headon on drums.

I first met Joe Strummer moments before he was going to get on stage at St. Anne’s Warehouse in Brooklyn in April 2002. I was there to discuss a documentary film project with him. His people had given me the go ahead to take some photographs from the stage. But with no direction of where to go, I found myself roaming the backstage area. looking for the best spot to jump on stage and snap my photos of Strummer and his current band the Mescaleros when suddenly we bumped into each other, nearly knocking each other over. We spoke for a moment. “Are you Italian, mate? I love the Italians.” These were Strummer’s first words to me.

The show featured Strummer in classic form, playing a mix of new and old songs and ended with a “tear-the-roof-down” version of The Clash song “Police on My Back.” Strummer, always ironic and satirically clever, dedicated the song to former New York City Mayor Rudolph Guiliani’s quality of life policing, which helped transform the City into “Disneyland” and “a giant mall.” After the show a bunch of people crowded into Strummer’s dressing room. Strummer called me over to sit next to him in the corner. “Well, I gotta say George Bush is making old Maggie [Thatcher] and Ronnie [Reagan] look more and more like Castro and Guevara,” Strummer said, giving me a wink and nod. Everyone in the room, which now included Steve Buscemi, Matt Dillon, Jim Jarmusch and a thick cloud of smoke, chuckled.

I spent the next few days hanging out with Strummer, discussing everything from the great Jamaican ska/reggae singer Desmond Dekker to England’s upcoming World Cup hopes (they lacked none, I told him) to the looming Iraq War to the suit jacket Sid Vicious of the Sex Pistols gave him after one of their first shows together in 1976. Nearly eight months later, Strummer was dead of a rare heart ailment. It was undiagnosed and could have taken him at 5, 20 or 45. The BBC news reported “he died peacefully in his sleep.” Strummer was only 50 years old at the time but in his short life he left behind a legendary legacy. And it all began with The Clash. As the U.K. weekly Sounds wrote in 1977, “If you don’t like The Clash, you don’t like rock ‘n’ roll.” 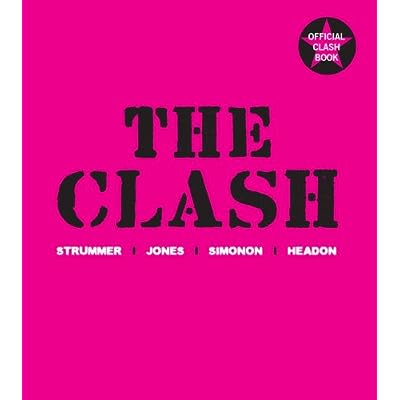 THE CLASH presents a glimpse into the hearts and minds of the musicians behind the music. It captures all the musicians in a refreshingly new and unpretentious mood. Here’s Strummer: “I called myself Joe Strummer because I can only play all six strings at once, or none at all.” The book does much to stress the significance of The Clash as a transformative and invigorating force in political popular culture. Just as The Clash were thrilling to listen to and watch the book is just loads of fun to look at and read. The ability to pull off creating music with a message that is entertaining and fun remains the group’s enduring contribution. Bassist Paul Simonon, a one time abstract expressionist painter, explains The Clash as “brothers in arms trying to get their message across.” The determination was in itself an end. “At least we tried,” Joe Strummer said. Thankfully for us they did.

Billy Bragg told me The Clash were, “the-greatest-rebel-rock band-of-all-time,” fully supporting the band’s daring claim that they were (and still are) the “only band that mattered.” Here’s twelve reasons why.

-The first release: The self-titled album is the greatest punk record ever made. Full of all the necessary ingredients: pure in its passion and determined in its demand for social change.  It moves from straight-ahead rock (“London’s Burning”) to reggae (a cover of Junior Murvin’s “Police and Thieves”) to punk anti war anthem (“Hate & War”) to the band’s call for racial unity (“White Riot”) to the now classic Bobby Fuller Four cover (“I Fought the Law”) to condemning the corporate takeover of music (“Complete Control”). “[White Man] in Hammersmith Palais,” with its mix of reggae, ska, punk, roots music and social commentary, is the album’s highlight.

– The Alliance: The Clash was one of the first bands to recognize the natural alliance between Jamaican music and punk, with the shared ascendant theme of a spiritual battle catalyzed by music. Bob Marley saw them perform in London in 1978. He later explained that he admired The Clash’s angry attack on race and class oppression and decided to pay homage to them and the affinities between punks and rastas with the now classic anthem “Punky Reggae Party.”

– The movement-World Citizenship: The Clash infused all their work with a sense of humanism not commonly found in rock or punk. They saw themselves as part of a larger community and the result was to encourage their audience to become engaged in the movement of world citizenship. On their first tour of America, The Clash placed flags of different nations behind them on stage to make it clear where they stood.

– The performance-Rock Against Racism: On Sunday, April 30, 1978 in London’s Victoria Park, The Clash took the stage as headliners for “Rock Against Racism.” Performing in front of a crowd of 100,000. Jack Healey, former North American head of Amnesty International, who later worked with Strummer on the “Free Nelson Mandela,” described The Clash’s work with Rock Against Racism as the model for all the human rights concerts that followed.

– The Vision-Positive thinking, the future is ours: While much of punk wallowed in self-defeating nihilism, The Clash traveled a different path. They spoke boldly and directly in terms framed in hopefulness and the exciting opportunity the future provides if one is willing to “grab the future by the face” as Strummer sang. Jim Jarmusch, who directed Strummer in Mystery Train, described it best when he told me The Clash were about producing “not reducing” like other punk bands including the Sex Pistols.

– The disciple-Public Enemy: The Clash inspired thousands of listeners to become musicians committed to creating a new “I” in hopes of discovering an old “we.” No one group is more emblematic of The Clash’s influence than hip-hop pioneers, Public Enemy. Chuck D said: “There would be no Public Enemy if The Clash hadn’t existed.”

– A record’s record-London Calling: The album remains one of the most important records ever produced. If you haven’t listened by now, you better.

– The song-“Clampdown:” For my money the best rock song I’ve ever heard. With it’s sharp critique of modern society’s shift towards technocracy (this was late 1970s England, high employment, little opportunity and ultra conservative Thatcher a few years away) and the dehumanizing affect it was having on workers and the poor, “Clampdown” offers an alternative view of how to respond through unity and working class rebellion.

– The tour: The Clash’s first U.S. tour (Pearl Harbour Tour) was a thrilling event for a group enamored with American music culture. The group’s label was unhappy with their choice of supporting act: Bo Diddley. The Clash believed Diddley to be the true father of rock and eventually got their wish to have him as support. The tour was a massive success, further validating the band’s inclusive musical approach.

– The band: The mix of these four musicians blended together in a way that created genreless music, or created a new genre of music. Strummer, with his rough, warbled singing and thoughtful songwriting. Mick Jones, a great composer and rock star guitarist. Paul Simonon was just simply cool. Topper Headon, with his ferocious drumming

– The New Folk: Strummer at one time called himself “Woody” in tribute to Woody Guthrie. Guthrie’s music reflected the concerns and feelings of his period but also transcended that time. The Clash’s punk sound was and is a particular popular sound, a new folk. When I spoke with Nora Guthrie, Woody’s daughter, she said that if her father were alive today he would certainly be a rock musician with a punk spirit.

– Humility: Not common among rock stars, certainly those who were in the most popular band in the world at one time. Strummer pointed out to me more than once: “Mistakes were made. None of us were saints. But in life you gotta have some regrets. We were seeking, groping in the dark, to do something better and to try be part of making this world better.” Maybe that’s the most important thing they continue to teach us, that the world is worth fighting for.

THE CLASH published by Grand Central Publishing is in bookstores now.