Tuesday night I had the pleasure of reading a short story at therumpus.net’s Seattle launch party, prior to a screening of the film Pig Hunt. Director Jim Isaac served up guns, blood, taxidermy, boobs, motor bikes, hippies, wild boars, and weed, and what’s not to love about that? What intrigued me most was the involvement of musician Les Claypool, who plays a murderous redneck priest, carrying around a sort of crossbow shaped like a crucifix. He provided the soundtrack as well, which pulled me away from the film a bit as I recalled Primus shows I’ve seen. I guess I’ve seen them three times. The first time opening for Jane’s Addiction on the Ritual de lo Habitual tour, the second at Lollapalooza, the third headlining at the Paramount in Seattle. There was a time when Primus impressed me, when the number of notes a bass player could cram into a nanosecond seemed the true measure of an artist. Their set opening for Jane’s Addiction blew my high school-aged mind and I rushed out to buy their debut disc the next day. A friend of mine embraced Primus with a ferocity that seemed to increase in proportion to the level of cannabis he consumed.

After the movie, I hopped on a red-eye from Seattle to JFK, then to a connecting flight to Burlington, Vermont (I’m currently teaching at a residency at Goddard College). I intended to sleep on the flight, but instead consumed five straight episodes of Lost Season 4 on my laptop. Confined to a window seat I curled into a chiropractic nightmare for the duration of the flight, injecting this show into my brain. I can’t say it was the most pleasurable way to enjoy Lost, but I am addicted to the show. 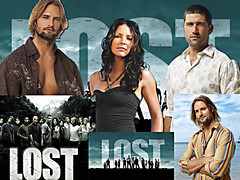 That the quality of television has gotten better is a fairly common perception, and I’d attribute this to the very thing that was suppsosedly going to make television shittier–cable. When Bruce Springsteen sang a song in (I think) the late ’80s about “52 channels and nothing on,” many assumed that the proliferation of niche cable networks was going to exponentially spread the already shitty content being slopped out of the big three networks. Perhaps its this very proliferation that has forced networks to concentrate on the one thing that can build a loyal audience–quality writing. While Lost is of a different genus than, say, 2666, I appreciate the way its writers have mastered the art of the story arc. Watching Lost to me is like a car enthusiast looking under the hood of an expertly restored muscle car. I enjoy seeing where the pipes go, how the wires connect, how the flash-forwards hint at developments several episodes down the line.

The crazy thing about writing for television is that the writers have to build in pauses for commercials.  A friend of mine who used to write for shows like Melrose Place (which became something of a tradition for me and my friends in college) has tried to explain the mechanics of beats and pacing and arcs and 45-minute stories to me, and it strikes me as a hyper-disciplined, difficult craft to master. But what happens when a TV show, whose very reason for being is to provide a venue for marketing products to consumers, is stripped of those commercial pauses? The story still has to accomodate those intervals where a commercial for fabric softener would go, but freed from that responsibility the show becomes a process of constant conflict and resolution. The screen goes black for a second just as a new crisis arises–a crisis specifically intended to keep us watching through the commericals. But on DVD, with no commericals to watch, the experience is concentrated, intensified. And since an episode without commericals is only 45 minutes long, it’s not hard to convince one’s self to watch just one more episode.

And now I’m going to quit blogging and go do just that.