One weird symptom of watching old movies, for me at least, is that I find myself imagining what the original audiences thought of them. I suppose this goes back to the anecdotes I’ve heard about The Great Train Robbery (1904), which caused viewers to dive under their seats when a bandit points his gun at the camera. The history of cinema is one in which we’re surprised by new vocabularies, then come to understand them to the point where we can mock them with a self-congratulatory sense of ironic remove. Take the Scary Movie franchise, or all those other movies with “Movie” in the title, like this really painful one I suffered through once called Date Movie. The humor of those things arises from our ability to decipher the codes. In Not Another Teen Movie, for instance, there’s a gag about how after a teen makes some sort of emotionally risky public pronouncement, they’re met with a “slow clap” from the crowd.

What were Japanese audiences thinking when they sat down in 1950 to watch Akira Kurosawa’s Rashomon for the first time? How did the film resonate for a culture grappling with the aftershocks of wartime propaganda? Now “Rashomon” is simply short-hand for multiple characters telling a story from contradictory points of view. In Kurosawa’s adaptation of a couple stories by Ryunosuke Akutagawa, we’re treated to the pleasant experience of having the narrative rug pulled out from under us over and over again. We see multiple versions of a single event, a rape and murder in the woods of some indistinct, samurai-era Japan. Before an unseen and unspeaking interogator, the bandit, the rape victim, and (via a medium) the dead husband recount their versions of this horrific event. It’s this last version that made me sit up. Kurosawa does something crazy with the audio here, having his genuinely spooky medium character deliver the dead man’s testimony in the form of a low-fi overdub. Truly freaky. 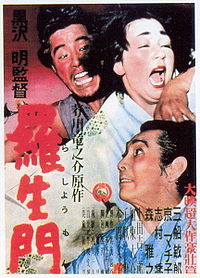 I’ve also got to say that Rashomon made me once again fall in love with the Akira Kurosawa players, so to speak. There’s Toshiro Mifune, of course, as the bandit Tajômaru, cackling to the point of red-lining the EQ. Mifune’s Seven Samurai compadre Takashi Shimura plays the woodcutter whose mind has been thoroughly blown by all the shit that went down. And Daisuke Katô, man. That guy reminds me of John Belushi. I thought he was the best part of Yojimbo, too.

So what did early audiences of Kurosawa’s film think when the film ended and they stumbled out into the Tokyo night? It’s really the textbook example of unreliable narration. Could Tarantino have been thinking about Rashomon when he directed the scenes in Reservoir Dogs in which Mr. Orange narrates flashbacks in which he simultaneously appears? Are all narrators suspect now? Was Ken Kwapis, who’s directed several episodes of The Office thinking of Rashomon when he delivered 1991’s Kevin Bacon/Elizabeth Perkins vehicle He Said, She Said? Will we ever know?