“What’s it like to be married to another writer?”

Someone asks this question, with varying degrees of fascination, every time I do a reading. It’s as predictable as the person who laughs in all the wrong spots, or the question about whether I write in longhand or on a computer, or the fact that there will be at least one person in the audience reading a Michael Chabon novel.¹

When writing the bio for my book jacket, I did not know that mentioning I was married to “the novelist Katharine Noel” would spark such interest. It just seemed like a nice thing to do.²  Also, I’d seen other writers do the same thing, and I wanted to show people how lucky I was: Hey, I’m not a lonely schlub!

In retrospect, this was naïve. Just as people prefer their mathematicians to be endearingly deranged, most people prefer their writers to be lonely schlubs. They seem to look at two writers living together as somehow unnatural, a zookeeper’s mistake. Perhaps it goes against our idea of how writers should be spending their time. If they’re not masturbating in the middle of the day, we expect them to be hunting lions or shooting apples off women’s heads or matching drinks with famous painters. We expect them to be suicidal or drug-addicted or generally unhinged. Certainly we expect them to mistreat their spouses, those long-suffering caregivers. We do not expect them to put Elmo puppets on their hands or watch reality TV with their families or launch inquests into who left the washcloth at the bottom of the tub.³

Or maybe I’m wrong. It’s not the bourgeoisness of our life that fascinates people, but the idea of our competing against each other for awards and readers and book contracts. Maybe when Katharine wins the Pulitzer,4 I’ll have a different take, but right now I can’t imagine not being married to another writer. Somehow I don’t think a lawyer would be quite as understanding when I wake her up in the middle of the night for advice about a semicolon.5 Or when I forwent showering for three days before an edit was due. And who else but Katharine would celebrate with me-would have the slightest idea why I was jumping up and down and having heart palpitations-when I won a prize that no one without a subscription to Poets & Writers magazine has ever heard of?

It’s hard enough explaining the intricacies of a Pushcart Prize to my mother; imagine trying to explain them to a social worker who’d married you under the impression you were gainfully self-employed. How much money was it? Excuse me? Didn’t you work six months on that story? No, that’s great, honey. Wow. I’m really proud of you. Oh, a free hardcover. Sure, we can put it where my father will see it. I’d love to celebrate, you know I would, but I have to rescue a child from abuse. Of course, I’d be lying if I said we never got jealous. When Katharine won a prestigious fellowship at Stanford, before either of us had published books, I felt like her ship had come in and left mine bobbing forlornly in the waves. For two years, I was the spouse, lingering in the background at parties while her new friends swapped impressions of “Toby” Wolff, one of my favorite writers. And when it came out that I also write- “Eric’s a writer, too,” she’d say-a look of embarrassed pity would cross people’s faces, as if she’d told them I was stalking Bigfoot. Of course, they figured Katharine had to go along with my charade; she was probably even deceiving herself, blinded by love. I didn’t blame these people really. They did an admirable job of pretending to take me seriously. Still, when a story of mine came out in Cimarron Review and Katharine showed it off at a dinner party, foisting it on our guests like a proud parent,6 the effect was a bit like someone at a party deciding to put on a CD by a “friend’s band.” Even after I won the same fellowship two years later, some small, niggling part of me believed it was only because of Katharine.

Of course, what goes around comes around, sometimes in perverse ways. When Katharine applied to a writer’s colony off the coast of Maine-near an island she loves dearly, where she spent summers as a girl-she needled me to apply as well, thinking it would be nice if we both went. It would have been, if she’d gotten in, too. This was the beginning of a seismic7 shift in my favor. Of course, Katharine was stoic about these defeats-even about her Waterloo in Entertainment Weekly, which graded my book two points higher. Overall, though, we try not to let these things determine the course of our marriage. And even though her book has 28 reader reviews on Amazon and mine has 1, I console myself with the fact that the sole respondent claims it’s the best collection he’s ever read (not a relative, I swear).

The last thing I would ever do is keep a score sheet. But since I’m sure you’re dying of curiosity-and I wouldn’t want you to get the impression there’s any hidden resentment on my part-what the hell: 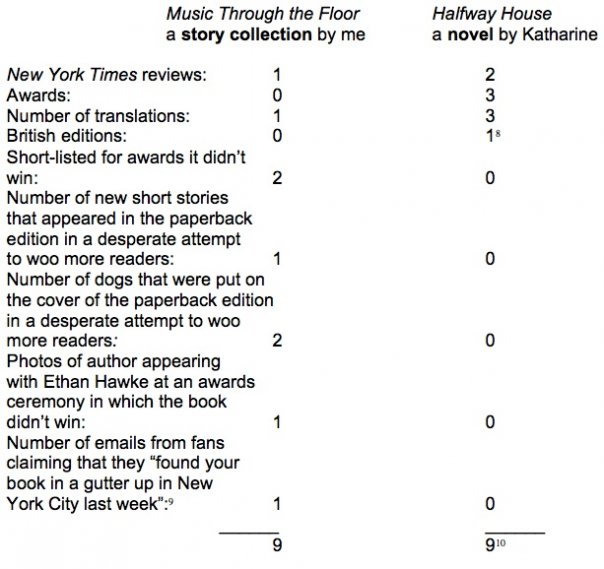 As you can see, the score is perfectly even. The secret to living with a writer is to choose someone whose success computes exactly with yours.

Still, there are plenty of things about Katharine-and her writing life-that I don’t pretend to understand. For instance: How can she write such beautiful novels while listening to Sonic Youth and My Bloody Valentine? Is such a thing possible without drugs? And why did it take her eight years to write her first novel, when what I hear drifting from her room all day is breakneck typing? What’s she actually writing in there? A hidden masterpiece?11 All day long, too, I come across enigmatic notes scribbled on Post-its or bookmarks or subscription cards sitting by our bed. A gradual introduction to the sport of boredom or F has very small penis! I sometimes worry if they were inspired by me. (One of the effects of living with a writer is that you wonder if you’re living up to the sex scenes that appear in her book, especially when one of them is excerpted on Nerve.com.12) What does it mean that the one quote she’s chosen to tape to her computer, in distressingly large caps, is “Write as if everyone you know is dead”?

“Do you read each other’s work?” This is the other question posed to me at readings. I’m always tempted to answer, No, I haven’t read a word she’s written, but I think what people really mean to ask is whether we “critique” each other’s work, and if so, how we avoid tearing each other’s heads off. Certainly I’ve heard of couples who’ve been irreparably damaged by honest appraisals. (One wife I know stopped writing completely after being critiqued by her husband.) Frankly, though, I don’t know how I ever survived without a novelist in the next room. Katharine is my first and last reader, and she’s saved me from myriad embarrassments. Hemingway once said that the most important thing for a young writer to have was a “bullshit detector”; I don’t think he meant a literal device, but he also never met my wife. She can spot an easy irony from pages away. She gives me exactly the sort of good, rough editing I’m looking for-and I do the same for her. In fact, we can’t get enough of it. Lately, we’ve been barging in unannounced, asking each other to proofread email. We’re always touching each other’s words.

Of course, it helps that we’re different writers and to some degree even have different tastes. I love Cormac McCarthy; she doesn’t. She worships at the altar of Henry James; I can’t bring myself to read much beyond Portrait of a Lady. Similarly, I don’t expect Katharine to like everything I’ve written; in fact, I know there’s at least one story in my book that she doesn’t think much of. But that’s OK. No, really, it is-even if I like everything she’s ever written.

So my advice to young writers: Marry a novelist (ideally one whose stories of old family money are based on personal experience). I used to sit down every morning and have to imagine an audience for myself, trying to conjure the features of some anonymous reader I’d never met. Now I can picture the face perfectly: a beautiful, brown-eyed woman who happens to be sitting in the room at the end of the hall. She’s listening to Loveless, a cup of lemon-ginger tea steaming by her side.13 In a real and practical way, everything I write is for her. Maybe I’m just buttering her up in anticipation of showing her my 500-page novel for the third time-but I really do think of her reading each word as I write it, scrawling in the margins.14

I Married a Novelist is a Rumpus Reprint and was originally published in Canteen.

Eric Puchner is the author of the story collection Music Through the Floor. He teaches writing at Stanford University where he was a Wallace Stegner Fellow. His wife, Katharine Noel, also writes. More from this author →