When you grow up being called a faggot by farm boys because you like to read books, Woody Allen can appear as something of a savior. That’s my story, anyway. Allen’s early films with their broad appeal mean that even small town video rental stores are obliged to carry his work, shelving Interiors beside Bananas in the comedy section. 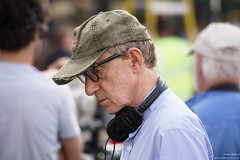 When I was in high school, I subjected potential girlfriends to something of a test, seeing how they reacted to Take the Money and Run. None found it nearly as amusing as I did, and predictably my high school romances were fraught in disappointment. It was only when I got to college, when my future wife and I cried at the end of Annie Hall that I felt I’d found true love.

The other night I finally slipped in a months-old Netflix copy of Vicky Cristina Barcelona, the story of two American beauties abroad. Within the first twenty minutes I resisted the film, thinking I am not in the mood to watch a movie about people who don’t have to worry about paying bills. Perhaps it’s my persistent shame at being relatively untraveled, but I wasn’t all that compelled to follow the romantic intrigues of people who float through Europe on the wings of their charmed life. The characters who do have jobs in these film are shallow, khaki-wearing business schmucks, men ever cognizant of one another’s golf handicaps and bewildered by abstract art. Javier Bardem appears as a chunk of confident sexuality, an artist–of course–whose seduction of Scarlett Johansson’s and Rebecca Hall’s title characters cuts right to the subtext of romantic comedies in general. We just want the characters to get it on.

Vicky Cristina Barcelona rubbed me the wrong way, I guess. I wasn’t in the frame of mind to accept escapist entertainment on its own terms, which is unusual for me. After all, recently I’ve been perfectly willing to accept the snappy breeziness of Preston Sturges.

I suppose I expect a lot from Woody Allen, while recognizing it’s his prerogative to make a light, enjoyable comedy. It was Allen’s films that suggested to me that the life of the mind might be something a kid like me could aspire to, and Allen’s bespectacled and frizzy-haired presence at the center of those early comedies was a balm to my adolescent anxieties. The post-coital chatter of those films was titilating in a way that a sex scene never could be, implying that by sheer force of wit and intelligence a physically inadequate guy could get a woman to fall in love with him. That’s heady stuff when you’re 14 years old and have never made a basket in a basketball game.

Even in the films in which Allen’s presence isn’t in front of the camera, he tends to make an appearance anyway, as with Kenneth Branagh’s channeling of Allen’s neurotic tics in 1998’s Celebrity can attest. My guess is, based on Match Point and now Vicky Cristina Barcelona, Allen just isn’t interested in directing proxies of himself right now. (I have yet to see the new film with what’s-his-name from that one show, uh, Larry David, who looks like a Woody proxy if there ever was one.) Which is wonderful and opens up a whole new period for his genius. I wonder, though, if the result of this approach is that these films feel more like a product of Allen’s head than his heart.