Anthony Lister’s paintings are hard to describe–mostly because they’re so easy to describe. You could say Lister is a graffiti-artist who does paintings of comic book characters and other pop-culture icons in spray-paint, but that doesn’t explain why they look fantastic. It’s probably faster just to look at the pictures.

Zak Smith: So, the basics: where are you from?  Where do you live now?  How long have you been showing etc.?

Anthony Lister: I live in Sydney at the moment. I kind of spend half the year in Australia and the other half in my studio in Brooklyn. I’ve been exhibiting my works in solo shows since 2001.

Smith: Some of the interviews and press I’ve seen about you emphasize your themes—TV, super-heroes, etc.  But the first thing I noticed about your work is that it doesn’t suck at all.  I mean, lots of artists can and do make art about “contemporary symbols,” but you manage to make these things breathtakingly gorgeous and worth looking at. What’s with all this useless adding to the enjoyment and richness of the human experience? Why not just make your point and move on? 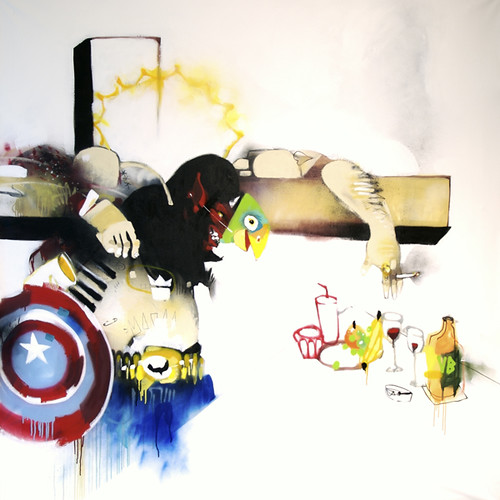 Lister: It’s more a case of over-analysis. When I make work, I try to only make it for myself. There isn’t much thought about who is going to see it or what they will think or what they know or what is cool. Painting is a funny thing. There are a few guide lines that I try to keep in mind, like what would I think of this painting if I was an 80-year-old man reflecting on what I wanted to make as a younger man.

Lister: There is a lot of this and that. Spray paint is usually just to lay down quick drying color planes in which I come back into and usually end up painting out completely.

Smith: The impression that magazine articles and gallery shows generally give—especially when the artist is involved with graffiti—is that all the artists are part of this big helpful cool collective and are all always hanging out together and skating and doing collaborations and generally having a network and a scene. Now, I know this is neither all-the-way-true nor all-the-way-untrue but to what degree is it true? 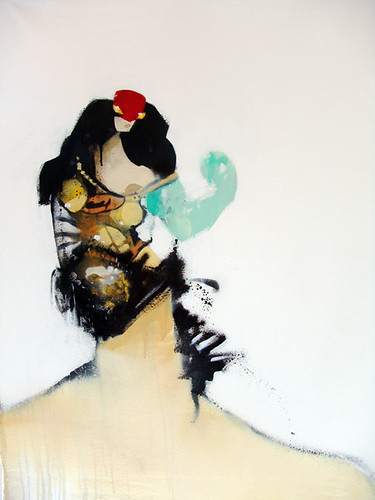 Lister: As I have grown up and made the work I have wanted to make and met people in similar situations it has become apparent that there is a large collective of like-minded creators. And at times it can be ironically exactly as you describe.

Smith: If I were a moron, I’d compare your work to the old Pop artist Roy Lichtenstein, since he was the first artist to use comics imagery a lot.  But in reality, it seems like you guys really occupy opposite ends of the spectrum: he basically took art that Jack Kirby and other comic artists made and made it bigger and put it in a gallery and said, “Look, now it’s real art,” whereas you seem to see comic book artists as real artists whose work you’re trying to build on top of. Does that make sense?

Lister: Well I have always admired the hand drawn line and comics especially have played a roll in my early development as a training artist. I wouldn’t say that I am “building on top of” as much as I am “borrowing aesthetics” for my own rendition of conceptual redefining.

Smith: What’s an average working day like for you?  How much time do you spend painting? 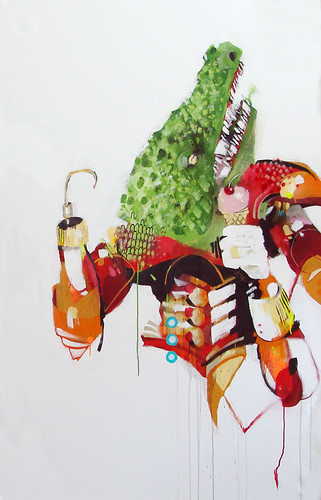 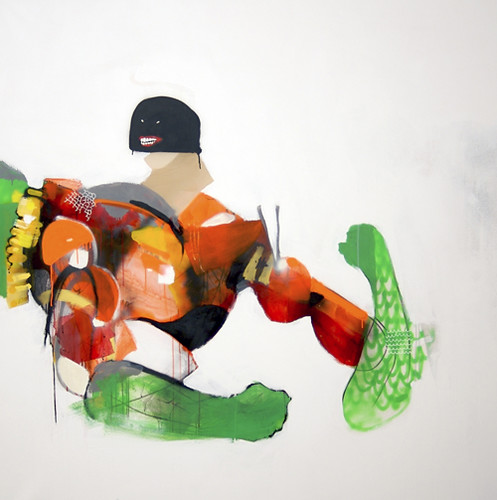 Lister: It is hard for me to maintain a consistent working practice outside of just trying to pay attention to the energy I have and the to-do lists I write for myself. Painting is an unpredictable thing; I try not to push myself to work if I am not feeling it unless there is something that has to get done in which case I usually find the energy in the chaos of panic. There is so many other elements to maintaining an artistic practice especially if you are your own boss. I try to maintain a balance of all things at all times.

Smith: How much street art do you do these days?  I noticed something on Wooster Collective recently.

Lister: Yeah sure. As much as I have the headspace for. I treat my street practice as a bit of break from my studio work. It’s always a pleasure to install a good street painting for the public. 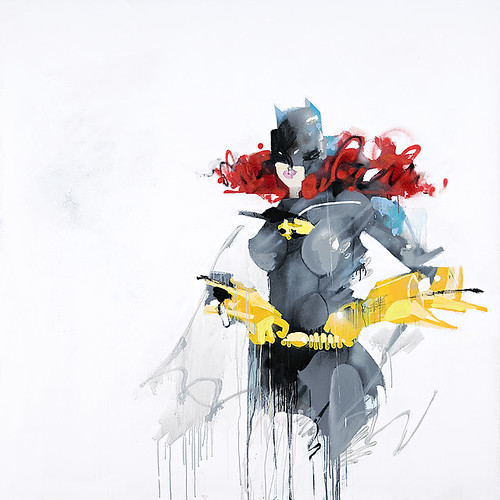 Smith: The impression I get is that you start with a blank surface and then start sketching—maybe something you already had an idea about, maybe not, and an idea for a figure comes up and you basically form that figure until the “energy” of that single image dissipates. Like there’s one image that’s in your head that needs to get up there and once it’s formed and up there, you let it go and don’t fiddle with it. Is that pretty much it?

Smith: Now forgive me if this is a stupid question Australian artists always get, but I feel like the sort of imagistic, almost dreamlike way you pull up these heroes is in spirit—if not in style—like the way Sydney Nolan painted his pictures of Ned Kelly—is that at all on target?

Smith: The color in your paintings seems really to have taken a jump when you started working with comic book images—do you feel like that was part of the appeal?

Lister: I guess. For the longest time I used to restrict myself by using a limited palette as a way to concentrate on the subject matter and technical approach. The super hero series since has been kind of about me letting go of the safe places I relied on in the past and exploring new chromas.

Smith: You’ve said—and I believe you—that your stuff is about reality, even though the images are from the media. Could you talk a little about that?

Lister: Well I’m all about developing analogies in relation to situations I am exposed to in society and my own life. I feel a lot of the time the ambiguity in my work acts as a trap door in which I can create excuses and make up stories. A lot of these stories are about reality. 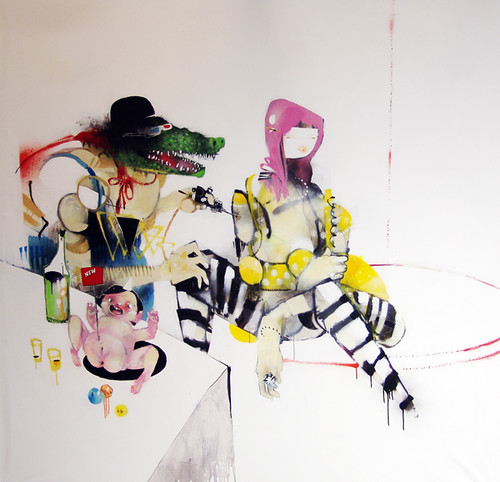 Smith: Can you grab one or two of your paintings and describe the situation that inspired it?

Lister: This piece, titled HOLY MOLY (mixed media on canvas, painted 2008), is based on a story about Britney Spears’ sister having a baby. I initially painted a picture of a pretty young woman with a baby spitting lottery balls out of its vagina as if to suggest that children are a metaphor for the Holy Grail. It is a painting about fertility, miss-guided youth and predators within social networks and in the media.

Smith: Are there any artists working now you feel like you want to tell us about? (Some who are your pals, but also some that you don’t know, if you can.)

Lister: It isn’t often that I am really blown away and impressed by work I see. But having said that I am totally into the work of Ben Frost, Kill Pixie, Faile, Judith Supine, Gerhard Richter, Magnus McTavish, Keiron McMaster, the Chapman Brothers, Chris Johanson, Bast and Josh Keyes just to name a few.

Smith: Ok, in a painting like “Tigra Got A Talk Show,” the title is a joke about Tyra Banks, but the painting, really, is just a painting of Tigra from the Avengers comics. Are the titles just an opportunity to say one more thing to the audience, (as if you are standing next to your own painting and are thinking of something to say) or an integral part of what the picture means or something you know you have to do so you just do, or what? 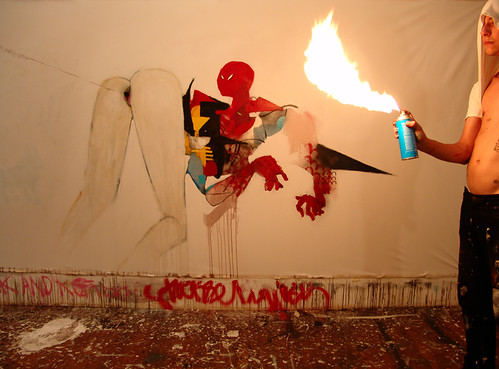 Lister: That’s exactly it. In a painting I feel like I have three points of power: the first is painting the work, the second is titling the work and the third is exhibiting it. Each of these points is very important for me to get my message across and each is an opportunity to alter my ultimate expression to the viewer.

Smith: In street art, there’s no title—or at least none the viewer can see. Does that affect anything?

Lister: Not really. The work essentially is the work and that is ultimately what it is all about and most important.

Smith: Even if someone doesn’t read comics, what a given superhero means or stands for is sort of communicated by the way that character looks; Batman is supposed to be dark and noire-y, the Hulk is angry and radioactive, etc. Is this one of the reasons they’re useful to you?  I mean, if you painted Athena or Apollo up there, the impact wouldn’t be as visceral.

Lister: That’s right. Eros and villains are better portrait in contemporary society as the iconic characters we have grown up with and have been influenced by from cultural and political media. Using this subject matter allows me to communicate with my peers but make the same points that have been made for a thousand years. 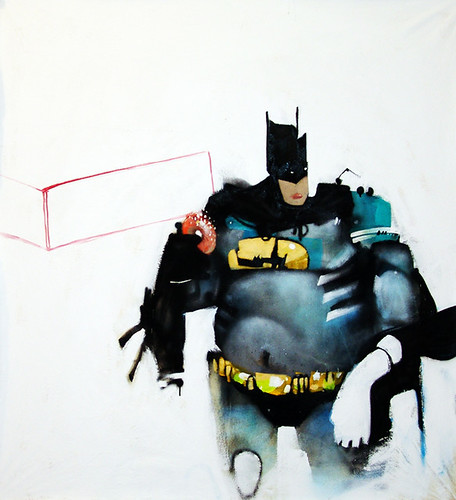 Smith: One thing that’s unusual about these paintings is they sometimes combine an extremely powerful, sharp visual impact with something funny in the same picture—like “Fat Batman” is obviously kinda funny, but it also screams very loudly at you to look at it and keep looking. Like the way you painted his head, for example, is striking. A lot of people can paint “funny,” and a blessed few can give you that “skylight-shattering-over-head” visually intensity, but few do both.  Do you consciously try to counter the “cool” aspects of your own work with a sense of humor, or is that just automatic?  Or is it a crap shoot every time?

Lister: A combination of all three, and then some.

See more of Anthony Lister’s art on his Web site.