North Korean women risk their lives to escape across the border to China, where they often face lives of indentured servitude and the ever-present fear of being outed by the husbands they marry or communities they join and sent back to North Korea.

When the news broke that two American journalists, Laura Ling and Euna Lee, had been arrested in North Korea for illegally entering the country across the Chinese border, my thoughts went quickly to author Hyejin Kim. Ling and Lee were in Northeastern China working on a story about the North Korean women who risk their lives to escape across the border to China, where they often face lives of indentured servitude and the ever-present fear of being outed by the husbands they marry or communities they join and sent back to North Korea.

Hyejin Kim’s first novel, Jia: A Novel of North Korea, is a fictionalized account of just such a journey; it’s a story she heard many times when she was living in Northeastern China, and one of those women in particular inspired Kim, a global affairs scholar and education consultant, to write the book. In 2006 I had the pleasure of working with Hyejin on her manuscript, and was deeply impressed with both the stark lyricism of her prose and humane, urgent approach to her subject. I wanted to talk to her about the release of the book, the situation now, and the clear dangers of trying to get these stories out into the world–Ling and Lee were convicted not only of trespassing but entering the country with the intention of creating a “smear campaign over [a] human rights issue.” Hyejin lives in Singapore, and my phone plan is pretty basic, so we conducted this interview over email.

The Rumpus: We haven’t been in touch since the novel’s release, almost exactly two years ago–what was the experience of publishing the book like for you? Did anything about its reception either in the U.S., Korea, China, or elsewhere surprise you? Has it been translated?

Hyejin Kim: The book is still published only in English. There have been several expressions of interest from publishers and writers who work in other languages. However, I am still waiting for appropriate publishers — publishers who can translate it without any political intentions. I wrote this book to focus on human life in North Korea, not to give a political lesson.

I was invited to some conferences after the book came out and will be attending two writers festivals in upcoming months. The book has been reviewed in a few high-profile magazines, as well as in several online venues. I was glad to see that many readers have indeed taken the book as a human rather than political story. I was told that some schools in the U.S. are using the book in class. In addition, the book has interested a film producer and he would like to make it as a film. I am currently working with him to write a film script based on the book.

Due to the language difference, the book has remained relatively unknown in Asia. Korea is not aware of it yet. The film might be known there earlier than the book.

Rumpus: You based the novel on the life of a North Korean woman you met while you were in Northeastern China who had escaped across the North Korean/Chinese border, and you were very careful about protecting her. Did you choose fiction over non-fiction to tell her story for this reason? Are the two of you still in touch and do you feel comfortable giving us a sense of how she is now and what she thought of the book?

Kim: Ji’a could be any girl in North Korea. Her character has been mixed with several people I have met even though one woman in particular gave me the motivation to start writing about them.

At present, I am not in touch with them. If you can’t help them directly, you’d better not ask them where they are and who they are until they start speaking. Asking about their lives out of curiosity and giving them hope for something you cannot promise can put them in danger of the worst kind. That’s what I learned while I was there. 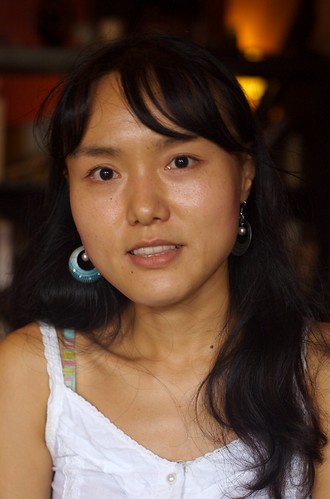 Rumpus: What is your sense about how the problem of North Korean defectors over that border is being handled? Has it worsened since the time you were there? A recent Washington Post article discussed the particular plight of North Korean women, whom the Chinese government will not recognize as refugees and the North Koreans will treat as criminals if they return. How does China defend its policy toward these escapees?

Rumpus: The two American reporters who were arrested in North Korea in March were attempting to cover the same story that you told in Jia. First, why has it taken so long for this situation to get the attention it deserves? Can you explain the politics of that border and what has happened there over the past few decades for those who don’t know?

Kim: In some of the places between China and North Korea, it is so easy to cross the border. If you don’t discover North Korean soldiers walking around, you cannot even guess that it could be the border. When I was in Northeast China, there were those kinds of places. You can talk with North Korean soldiers only an arm’s length away. In places where there are no guards, one must observe the utmost care not to accidentally cross. I can imagine how the tragedy happened and what I can say is that I feel sorry to hear the news and they should have been more cautious. I doubt that North Korean soldiers forcefully kidnapped them. Without knowing it those women could have crossed the border or they might have strong professional consciousness as journalists.

I was once held by Chinese police for several hours because I was taking photos of North Korean towns. As I mentioned, the politics of that border are capricious. It depends on diplomatic politics or international relations between North Korea and other countries. If the relations are not good or some issues related to North Korean escapees are in public, monitoring of that border on the North Korean side as well as the Chinese side get more strict. At other times, the policies can be rather lenient. When I was in a border town, taking photos was usually fine. But in this one cast it wasn’t. Due to the sudden order from the central government, they changed their attitudes. In the end, it was fine even though I lost all my film.

Rumpus: What was your reaction to the arrest of the journalists and now their sentencing to twelve years in the notorious North Korean labor camps? What do you think the government is trying to gain and do you have any predictions about the outcome?

Kim: I would be surprised if those journalists are consigned to North Korean labor camps, and I hope that doesn’t happen. They could think that those journalists are good hostages who can use when it is necessary to have negotiations and they can lead dialogue with the US on their own terms. I hope dialogue between the two countries, North Korea and the U.S., on this issue progresses soon.

Rumpus: In Jia you wrote vividly of the devastating famine of the mid-to-late 90s in North Korea, which lead to the starvation deaths of at least one million North Koreans. Poverty and lack of food are still critical issues in that country–could the sanctions being threatened lead to a similar situation and is that even a consideration for the dear leader?

Kim: My understanding is that the famine has enduring effects, even if the worst is over. North Koreans get food from several sources, among them their own harvest, aid from South Korea and elsewhere, as well as from Chinese traders. Certainly cutting off any of that supply would hurt many people. What the North Korean elite think of the situation is anyone’s guess.

Rumpus: President Obama and President Lee of South Korea recently committed to de-nuclearizing the Korean peninsula. Although North Korea was famously included on President Bush’s “axis of evil,” during his tenure they were virtually ignored. Are we paying the price for that now? There is a tendency here to characterize North Korea as our sort of crazy, cartoon enemies with delusions of grandeur–a country that can’t even feed and house its own population but thinks it can rule the world. Do we underestimate them at our peril and how real do you think this nuclear threat is?

Kim: As a South Korean who has family members in South Korea, of course I would like to believe that the nuclear threat is just a threat, or interpret this North Korean action as showing instability within North Korean society.

I don’t think that they hallucinate to the point they believe they can rule the world. It could be the last peevish acts against the world or tactics that they use in order to evade domestic instabilities (or some chaos in North Korean society). The attempt by North Korean Leader Kim Jong Il to name his son as his successor and the disagreement (or complaints) from other North Korean elites could be the reason why Kim Jong Il is conducting missile tests. In addition, a sudden change of attitudes with the new South Korean government and increased conflicts between the two countries could be among the factors. Diplomatic relations between North Korea and other countries seem to be a roller coaster and this ride could last longer but hopefully it will end safely.

Michelle Orange's writing has appeared in The New York Times, The Village Voice, The Nation, The Virginia Quarterly Review, McSweeney's and other publications and has been collected in The Best Sex Writing 2006 and Mountain Man Dance Moves. She is the author of The Sicily Papers and the editor of From the Notebook: The Unwritten Stories of F. Scott Fitzgerald, a collection found in issue 22 of McSweeney's. Follow her on Twitter @michelleorange. More from this author →