“On the whole Young’s work deals with issues of corporate culture and the artist’s place in it, but the spaces they were cast in no longer seemed to exist culturally.”

It’s not often that you look at a line forming in history while it’s happening. Usually it’s from some vantage in the future—here’s how life used to be and now things are different. But over the past year I’ve had this feeling that things are changing and we all actively sense the stakes on some different level, drawing lines in sand every morning as we wake up, only to revise them again before tucking ourselves into bed. Art helps gauge our shared place in the world, but the environment of art changes, everyone proclaims that a bad economy is great for art, that it thins the herd and reinvigorates the impulse. But there’s panic in these affirmations—what happens to the art that we are moving away from—the art that comes from the time just before?

Several months ago I viewed British artist Carey Young’s “Counter Offer” in Toronto, and felt friction between the present and what had just been. Here meaning had shifted from the time when the exhibition was commissioned and the following year when it was installed. On the whole Young’s work deals with issues of corporate culture and the artist’s place in it, but the spaces they were cast in no longer seemed to exist culturally. Filmed in the bland corporate spaces of Dubai and the interiors of corporate banking offices, often populated with bankers, lawyers, and motivational coaches, but the context had changed in our economic times, and I’ve been trying to figure out exactly what that may mean.

Young’s “Counter Offer,” on display at Toronto’s Power Plant, was a cautiously slick show, clever, clean, but all the posturing for an overlay of art and corporate structure seem a little beside the point in the current economy—like somebody forgot to blow the candles out on this birthday cake. We’re in a recession. Corporations are cutting fat or going bust, but Young’s pre-bust work is still two stepping at corporate jingoism or flat institutional critique. Remember when every band wanted to be a robot or at least sound like one? Well, it’s a great premise, but those bands—despite their best attempts—were still made of people, and that’s what made them interesting; it’s the friction between these two ideas that’s exciting, not the hollow assimilation of corporate speak into art. “Counter Offer” draws from Young’s work over the past decade: video, photography, text, and performance, all of which explores themes of corporate culture, but the show may ultimately be a victim of the current economic downturn and a corporate identity that has stepped out to lunch. 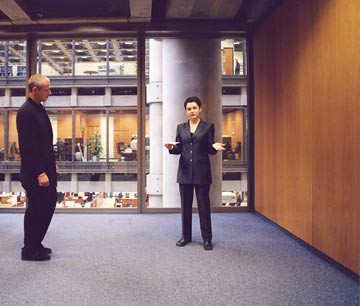 Perhaps this has more to do with the times we live in than the work itself, but this friction shows best in the details. In the video piece “I am a Revolutionary,” the artist is coached through her delivery of the line: “My name is Carey Young and I am a revolutionary.” Through much of this work Young casts herself as a gorilla in the mist of corporate nature, blending in or interacting with a world of beiges, power suits, casual Fridays, and the conceptual space of legalese. Here a corporate trainer in a dark suit offers bland guidance; slower, louder, again—reminds her that she is something, what is that? She is a revolutionary. But the emphasis seems always in the wrong place—first on I, then am. He coaxes her through the syllables of rev-ol-lu-tion-ar-y. There’s something lovely about this word, implying somebody whose vocation is to be in a state of revolt, the way the v thrusts, but out of place in this wasteland of corporate culture-—it’s hollow. One doesn’t have to be revolutionary, just deliver the words convincingly. Behind them a glass wall opens onto offices across the way, but it’s not Young’s stagy corporate life but the details behind her corporate rehearsals that draw us in; here a man sits at a desk doing data entry, while nearby someone gathers files into a case then exits. Where does the artist or individual fit into these oversized corporate spaces—or is this the specter that haunts Young’s work in our current economy?

Across the gallery in a smallish nook was the installation “The Representative” consisting of a white chair, lamp and end table featuring a red phone and framed photos of a man and woman. The setup is simple: pick up the courtesy phone and interact with one of the call center agents pictured. The show invites us to converse with a call agent and ask questions about his or her life. Normally call centers are faceless—portals between the individual and corporate interests—so this is a snapshot into the unsung person entrusted with the soul of a corporation. But today when I pick up the receiver a prerecorded message simply states that the attendant has stepped away from her desk.

Upstairs was the video projection “Product Recall” in which the artist and her therapist conduct a session in a spare, but well-appointed office. Reenacting the classic tableau of psychoanalysis, the therapist rattles off corporate slogans, while Young—on a reclining couch no less—attempts to match them with the correct brand: “Passionate about creativity”—“Citibank.” The call and response drifts through a litany of mottos, but it’s unclear whether the goal is to recollect the proper responses or to map the ways that corporations colonize the popular mind; as the therapist notes: he’s looking for how many ad slogans the artist remembers and how many she’s managed to forget.

Before leaving I tried “The Representative” one last time, sat in the chair and picked up the phone, but again was greeted by the prerecorded message: “You’ve reached ‘The Representative’ sponsored by Charter Communications. I’ve stepped away from the desk. Please call back in a few minutes.” Maybe the person was out to lunch, or I got an off day, but I can’t help wondering if calls now simply routed to a callbox—the victim of golden parachutes and corporate downsizing.

Jared Pappas-Kelley is the author of Solvent Form: Art and Destruction as well as the forthcoming Stalking America that asks us to fundamentally misunderstand America on the deepest level. His visual work has exhibited internationally at places such as San Francisco MoMA, Mass MoCA, Five Years in London, Islington Mill, and Glasgow International as part of the National Review of Live Art. More from this author →