At least as well known for his boozing as for his books, iconic Irish author Brendan Behan (1923 – 1964) was a rollicking, larger-than-life Gaelic knockabout—a foul-mouthed, furry-chested stereotype of the drunken Paddy. In fact, the polemical playwright and legendary dipsomaniac once sardonically summarized himself as “a drinker with writing problems.”

Behan was, at one time or another, a Borstal boy ( = reform school inmate), an I.R.A. “messenger” (he was an explosives expert with a special preference for gelignite), an inveterate jailbird, a busker, a pornographer, and a house painter. He was, at all times, a rebel and all-around hellbender. In the end, it was a bottle and not a British bullet which did him in. His death certificate cited a terminal condition of “hepatic coma, fatty degeneration of liver.”

Bawdy, brawling, send-em-sprawling, pub-after-pub-crawling Behan referred to the stout which was his beverage of preference as “a pint of gargle,” and thought nothing of putting away several thimbles of whiskey washed down with a gallon of ale chasers. The champion toper, when three sheets to the wind, and flush with a fresh royalty payment for one of his books, would routinely pass out money to anyone who approached him with a hard luck story, then trundle out of the tap room, a besotted grizzly bear of a man, singing in the streets, stumbling in the gutters, bumping into lampposts, and carrying on loud conversations, at all hours, with nonexistent respondents.

He was raised first by nuns, the French Sisters of Charity, whom he loved, and of whom he said. “I was their little pet”; then by priests, the Christian Brothers, of whom he said, “I hated them and they hated me.” His real education came in a succession of lock-ups, where he had time to improve his mind and to plunder the libraries while molding himself into a surprisingly fine French and Irish scholar.

He was born with revolution in his blood. As Sean McCann tells it, “He came from a long line of rebels who were nurtured over a tenement fire. A grandmother of his was jailed for illegal possession of explosives at the age of seventy. A grandfather was one of the Invincibles (they murdered Lord Cavendish on a Sunday morning in Phoenix Park in 1882); both his parents fought in the War of Independence and in The Troubles; his father was interned with Sean T. O’Kelly, later president of Ireland; his uncle Peadar Kearney wrote the Irish National Anthem, ‘The Soldier’s Song.’ Brendan was nine when he joined the junior movement of the I. R. A.” Also by the age of nine, Behan was imbibing to the point of flagrant inebriation. 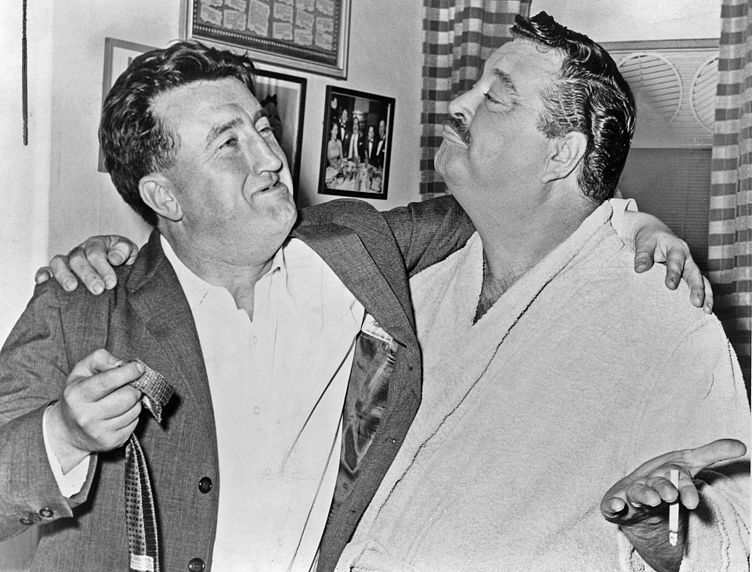 When he wasn’t holding forth in a grog shop, he could be heard uttering unintelligibilities on radio or television. Edward R. Murrow cut out Behan from a broadcast citing “difficulties beyond our control”; on a television program where he appeared bombed with Jackie Gleason, the comedian said of him “Behan came across 100 proof—this wasn’t an act of God, it was an act of Guinness.” The Daily News quipped, “If the celebrated playwright wasn’t pickled, he gave the best imitation of rambling alcoholism you ever saw.” With tousled hair and rumpled clothes, Behan would attend performances of his own plays roaring drunk, taunting the actors, shouting epithets at them, and insulting the audience by screaming “Eejits!” ( = Idiots!”)

Behan’s Herculean binges got him into plenty of hot water. He was jailed in London, fined in Toronto, banned in New York. Rude, crude, and socially unacceptable, the rowdy provocateur was a brash, loutish cross between Victor McLaglin and Lenny Bruce. He swore like the proverbial stable boy, soused or sober. He was constantly censored. When he achieved fame as a writer, the liquor dispensaries and moist social establishments which once summarily gave him the boot now threw open their doors in boundless charity and warmest welcome. And all Ireland loved him.

–For me, one drink is too many and a thousand not enough.

–I only drink on two occasions: when I’m thirsty and when I’m not.

–In a caricature of Behan, Rowan Atkinson includes a wall poster with the slogan “Too young to die, too drunk to live.”

Gilbert Alter-Gilbert is a critic, translator, and literary historian whose work has appeared in numerous magazines and journals. More from this author →