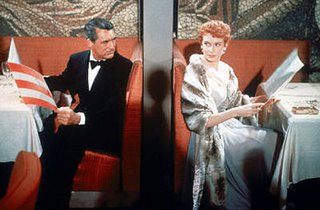 Though its final act revolves around a thoroughly aggravating plot contrivance (“Just tell him Deborah Kerr! TELL HIM!”) and there’s two dopey musical numbers by children’s choirs for no reasons whatsoever, An Affair to Remember is, without question, one of the most romantic movies I’ve ever seen. If that last scene doesn’t bring a tear to your eye, it’s time to get the ducts checked by your optometrist.

Cary Grant and Deborah Kerr are each engaged to be married to others (to be picky, Kerr’s just in a long-term relationship, but whatever) when they meet by chance aboard a transatlantic cruise liner. As wonderful in her masochistic longing as Kerr is, this must be one of Grant’s best and most subtle performances. Typically my favorite Cary Grant roles are the big, bawdy ones, I Was A Male War Bride or Monkey Business or The Awful Truth. An Affair to Remember‘s Grant is a bit more subdued; still witty, but dryer. He does a lot of the work with his eyes, which look upon Deborah Kerr as if she was the most beautiful woman in the world. Truth be told she isn’t, but there’s something about the way Grant looks at her that convinces you she might be.

The characters’ affair is filled with tiny moments of authenticity; the screenplay by Delmer Daves, Donald Ogden Stewart and director (and director of the original incarnation of this story, Love Affair)Leo McCarey, is light on one-liners and heavy on true observation: Grant and Kerr’s characters finish each other’s sentences, think the other’s speaking when they’re not, reads the thoughts of the other. Supplements on the DVD say Grant and Kerr improvised some of their scenes to increase the sense of familiarity and they did a marvelous job. The pair’s chemistry is undeniable, intellectually as much as sexually.

I haven’t seen the original Love Affair but I’d be curious to see whether it’s as well filmed as An Affair to Remember, of if McCarey’s fine directorial choices reflect the knowledge he accrued over a long career. When the cruise ship lands in New York, Grant and Kerr agree to meet in six months on the top of the Empire State Building, and once they go their separate ways, the building starts to creep into backgrounds, out windows or, in one sublime shot, in a reflection just as Kerr leaves her man for good.

One shot in particular knocked my socks off: Grant’s character is something of a celebrity, so everyone on the boat is watching him like a hawk. As his attraction to Kerr deepens, he can’t do anything about it because everyone is watching and snapping photographs. Desperate for privacy, their feelings too powerful to ignore, the pair finally kiss, on a staircase between decks, and McCarey shoots the clinch from the waist down. For one moment, they are finally alone, free from everyone’s probing eyes, including our own.

Matt Singer covers the world of film for the Independent Film Channel. He's also a regular contributor to their website, IFC.com. His personal blog is Termite Art. More from this author →