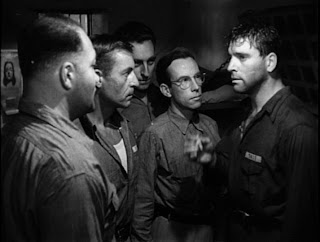 It’s about as manly as movies get, and yet it paints such a different picture of masculinity than the one seen in the robust, testosterone-soaked action pictures of my youth. Those were movies like Commando or Bloodsport, where men were measured primarily by how they filled out a birthday suit while kicking people in the neck. Heroes like Arnold Schwarzenegger and Jean-Claude Van Damme were such bad actors, it almost seemed like that was the point; that to even attempt realistic human emotion was not appropriate male behavior. Though I have a soft spot for those sorts of movies, I found the men of Brute Force refreshing. These guys are tough, no doubt about it, but they’re not afraid to actually present a few emotions other than deadly assertiveness and assertive deadliness. And when we do need a little I-will-kill-you-with-my-gaze-style smouldering, we’ve got Burt Lancster giving the stink eye and he does it about as good as anyone in history.

Lancaster is Joe Collins, a prisoner desperate to escape from Westgate Penitentiary Island, which is ruled over by brutal head guard Captain Munsey (Hume Cronyn). Brute Force is obstensibly about Collins’ escape plan, but those form relatively late in the film; much of the rest is given over to the horrific milieu of 1940s prison life, where the only voice of sanity is an disgraced, alcoholic doctor and snitches get a lot worse than stitches (specifically they get flattened to death inside an enormous press in the prison metal shop).

If Cronyn sounds like an unusual choice for a despotic prison guard, he is. But it’s also emblematic of movie itself; he doesn’t necessarily look the part, but man can he act it. And if it might be tough to initially buy Cronyn as the kind of guy who might be able to intimidate men around him into toeing the line, Capt. Munsey’s Gitmo-ready control techniques (and the disturbingly casual nature with which Cronyn enacts them) quickly change our impression. This is one of the great “a good actor can convince you of anything” type roles. I thought of Hume Cronyn before this as a grandfatherly onscreen presence. But as Munsey he is a truly despicable villain.

When I say this movie is packed with guys (a male-female ratio we might term dude density or, simply, “dudensity”) I mean it. The movie is set entirely within the walls of Westgate; the opening credits slowly bring us inside, and end with the doors shutting and its bridge rising, symbolically indicating that the audience is now stuck inside with the inmates. As such, there aren’t too many women on the grounds, so a feminine touch comes via an interesting device. Collins’ cell R17 has an absurdly tame calendar girl pinup on the wall, and each cellmate in turn gives it a flashback-trigger look that returns them to a time before their imprisonment. Each shows how the significant woman in each of their lives was responsible for their incarceration.

Now that could play as misogynistic, but it doesn’t. In all but one case these women are not the femme fatales we’d expect. They’re not sending their men out to steal or kill for them. Most of their stories are a good deal more tragic; one inmate is a soldier who got busted for stealing food from the U.S. Army to feed his Italian lover and her cruel father. These scenes add a melancholic dimension to the film, and while it doesn’t always excuse the criminal’s behavior, it sometimes add a humanizing dimension (and permits some of the best examples of the more complex acting that I was so impressed by). I read on Wikipedia that director Jules Dassin, who later dismissed this film as “stupid,” fought against the use of the flashbacks because they “watered down the film.”

With respect to the very talented man who made this superb film, I disagree. They don’t water down the film so much as they leaven it. Brute Force is, true to its title, absolutely brutal (the ending is particularly intense for a studio film of the era). The flashbacks provide the audience their only respites from its harrowing realities and show that a real man doesn’t use brute force because he enjoys it but because feels that has no other choice.

Matt Singer covers the world of film for the Independent Film Channel. He's also a regular contributor to their website, IFC.com. His personal blog is Termite Art. More from this author →