Sandra Beasley’s crisp images and multiplicities galore construct an enlivened world for her reader, bringing what Gregory Orr calls, “authority of imagination…” Each poem is an experiment that recreates from the codex of language a powerful brand of imagination.

Readers of energetic, ornate, and enthused poetry—step forward. I’ve got your woman. Sandra Beasley’s newest collection of poems, I Was The Jukebox, can best be described as playful surreal. Her poems take on the forms of pocket-sized fantasies; in each of her finely tuned poems, she occupies herself with representing different experiential voices, and she succeeds (to a tremendous level) at creating fascinating slices of reality and interesting characters.

Beasley ‘speaks’ through the most unlikely of forms, including but not limited to: the sand, an eggplant, Osiris, and the world war. In her most audacious identity-assumption, Beasley speaks as the duckbilled platypus. “I’d like to point out there’s no other kind,” the speaker snidely begins. The creature comes off as a curmudgeon, certainly sexually frustrated, and ends by kindly telling Disney to piss off. “The Platypus Speaks” is most especially wonderful considering it is a tightly-bound and brilliant sestina, an elaborate structure that could, in less capable hands, come off as repetitive or commonplace. The poet balances attention to form with her experiments in voice, enticing without overwhelming the reader.

In the midst of the disorientation created by the poet’s many voices, the reader should beware not to regard Beasley’s poems as flippant. Her abilities allow her to suspend the reader in a state of both elation and frustration in one thought-process, and this can lead to some very exciting results. Beasley’s poems have the capacity to wind up and smack you in the face, leaving you reeling you for the rest of the day. Her motifs can swerve to more severe subjects and yet still retain a signature crisp tone. The eighteen-liner “Vocation” ends:

It’s funny, but not too funny, and Beasley thrives in this middle ground of meaning. She may choose to quote inanimate or voiceless entities, but she can bring different humor, idiosyncrasies, and intentions to each of her subjects. She uses finely focused poetic imagery and juxtaposition that could open up even the most stubborn reader’s imagination. In “I Don’t Fear Death” the poet ponders the immortal question of—immortality. The speaker may not fear death, but her greatest dread exists on a more sublime level. She admits that, 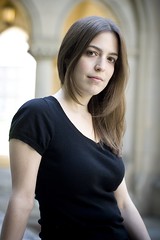 what I’m really picturing
is Omaha: field after field

of sorghum crisp to my touch
and one house on a high hill,

sheets on the line.

In Omaha,
the town names me Queen of

Everything. You are the slow
dance, the last ring of smoke:

to be held tight, and then only
this colder air between us.

The speaker doesn’t fear death, as the title suggests, but obscurity—an existence without meaning. The speaker would rather lose her life than go to the Midwest, and her relational appeal at the end denotes connections of ‘smoke’ and ‘air.’ These ethereal symbols exemplify Beasley’s talent for disorientation. Smoke may appear to dance, but the last couplet’s awkward grammatical construction allows for a multiplicity of meanings. What is really being held tight? Is it the ‘you’ of the poem? Or the cold air between ‘us’? Writing like this demands complicity from the reader and makes the collection supremely enjoyable.

I Was The Jukebox is broken into three seemingly indistinct sections, but there is a subtle cartography to the collection. One of the neat editorial tactics used in the collection is the presence of paired poems. For example, opposite “I Don’t Fear Death” stands “Immortality.” Together these poems are a reminder that you must take life on the terms it is given you. Although “Immortality” tackles the same themes as its partner-poem, it views them through a different voice. The speaker does not focus on the specifics of insignificance, but instead weighs obscurity through the lens of disintegration, saying,

Face it: I will never
appear on the flipside of a nickel,
…
I want to be the ball and the bat and the mound
And the sweat and the grass.

This poem may be the only one to disappoint the reader; it contains one of the few lines that need to be qualified as flawed. Beasley’s imaginative powers are in overdrive here, at the sake of their acumen. The poem ends with the somewhat kitschy couplet, “I want to be the vampire who drinks / a tall glass of me so he can live forever.” Typically, vampires in fantasy have always been immortal beasts, so this ending seems contrived and out of sorts. Luckily this does not occur often enough to sidetrack the reader. The rest of the collection resounds with a profound aura of desire, constantly returning to muse on the dilemmas of mortality, antiquity, and the future.

Sometimes it’s hard to know what to think when a poet releases a second collection. Should the newer poems be considered in the light of the previous book? Or should each work be critically assessed based on their separate merits? Will the poet stagnate, self-imitate? Or evolve and refine? I Was The Jukebox transcends these expectations. Sandra Beasley’s crisp images and multiplicities galore construct an enlivened world for her reader, bringing what Gregory Orr calls, “authority of imagination.” Although most of her poems are character-driven, her lyricism cannot go unnoticed. Each poem is an experiment that recreates from the codex of language a powerful brand of imagination.

Adam Palumbo is a poet-critic from Annapolis, MD. His research includes rigorous people-watching, too many hours on his computer, and wearing sweatpants in the kitchen. He reads a lot and writes a little. He is the recipient of the 2010 Margaret Haley Carpenter Award for Poetry. More from this author →