We’re giddy with the news that André da Loba, the artist behind the brilliant, whimsical and surreal illustrations for our Notable New York column recently received a merit award from 3×3 Magazine for his Notable New York series.

At 3×3‘s annual awards contest for contemporary illustration, The Professional Show (ProShow), André was also awarded a Bronze Medal for his illustrations for the graphic collectible card set “Biographies of Famous Americans” included in Gigantic Issue 2. Click through for a gallery of André’s awarded work along with other work we were honored to have André create for The Rumpus: 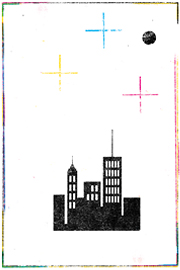