How much bad Hollywood filmmaking can one man take in a day? With my wife and kids out of town for a week, I decided to find out. Charting a day of theater-hopping at my local megaplex, I figured I could see six movies over 14 hours—an assertion of my right to quantity in lieu of quality. I thought this was a great idea. Most people disagreed.

“This sounds like a horrible idea,” my brother emailed me, “but a fun one to read about.” Would my head separate from my shoulders? My mind from my brain? My soul from my body? Here’s my experience gorging myself on Hollywood’s summer fare.

I’m standing in the downstairs lobby of the Boston Common 19, situated downtown. It overlooks the Common and the campus of my alma mater, Emerson College (go Lions). In my bag I have 12 Fig Newtons, an apple, two hard-boiled eggs, a small bag of potato chips, two chocolate bars, two Trader Joe’s strawberry bars, and a Nalgene bottle of water—everything I could scrounge from my almost-bare, post-vacation cupboards. In my pocket I have an AMC gift certificate I found in a drawer, good for one admission.

It won’t be my only admission, of course, but it will be the only one I “pay” for. I get my ticket.

I consult my notebook and see that my first three movies will be The Last Airbender, Despicable Me, and The A-Team. With a few minutes to spare, I scout their locations, plan my transitions from one auditorium to the next, note the location and position of the security cameras, take a rough headcount of the staff, and head in to see the movie. The auditorium has four other people in it.

I planned this one first not because I needed to be at my most mentally acute, of course, but because I’m fascinated by the career of M. Night Shyamalan. The trajectory of his critical reception (see left, below) inspires awe. But more interesting than the decline of his critical reputation is what I see as the inevitable transformation of how he sees himself: from important auteur to scrambling journeyman. The fact that he took this gig suggests to me that the transformation may be under way. With this movie—the first he’s made that didn’t come from one of his own original stories, though he did write the script—would he leave his personal themes and style behind, and embrace the principles and spirit of big-budget commercial filmmaking, à la other such auteur aspirants as Steven Soderbergh with the Ocean’s movies, or Francis Ford Coppola with Jack?

Neither of these comparisons is apt, of course, because Soderbergh and Coppola had significantly more auteur credibility before turning to the dark side, so to speak. And this is one of the things that makes Shyamalan unique: His reputation seems to be based more on his own ego than his accomplishments. How long can you think well of yourself after producing Lady in the Water, The Village, and The Happening? It seems like more than anyone’s self-esteem could take.

Anyway. The Last Airbender had (as of July 10th) an 8% rating on RottenTomatoes.com for a reason. One more person detailing the community-theater feel of the acting, the mystifying casting choices (why is that chipmunk-faced white kid dressed like a monk, and why do all these remote villages in this primitive world have a mix of what appear to be white, Asian, Polynesian and Indian people?), or the writing (one of the villains, Prince Zuko, played with a pained expression by Dev Patel, at one point threatens to burn down a village that’s made of ice) is like picking on the fat kid when he takes a fly ball off the forehead. Suffice it to say that Shyamalan, flushed out from the cover of artistic pretension, has proven to be as technically inept as he is intellectually bankrupt.

As for his hypothetical transformation into a big-budget hack—you’d be hard-pressed, I think, to spot this as a Shyamalan movie if you didn’t already know (unless, of course, you were sharp-eyed enough to spot his brief cameos). It will be interesting to see if he returns for the much-threatened sequel to this one.

Trailers: The Sorcerer’s Apprentice, Nanny McPhee Returns, Rango, Megamind, and Legend of the Guardians (why are those owls wearing armor, why are they all speaking with Australian accents, and is this a joke?)

This will be my longest layoff between movies—45 minutes. The theater is starting to fill up now, which is good for me. I can’t decide how paranoid I should be about getting caught. Most theater employees seem to lack the alertness, investment and sobriety to pay much attention, but still: I’m excited for this project and don’t want to get kicked out. I settle on: Slightly Paranoid. I go into a bathroom and take off my glasses, hat and sweater. Worked for Superman. 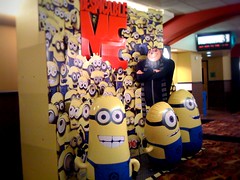 Is it crazy to think that Pixar so dominates CGI kids’ movies that they’ve given all other such productions a debilitating complex? If movie-goers were a girl, and movie theaters were a bar, Pixar would be the super smooth guy who makes everybody laugh effortlessly, never drinks too much, plays great darts and leaves with the prettiest girl in the room—not for a tawdry one-night stand but to settle down to a rich, fulfilling life together. All competitors would be the guy in the bad shirt wearing too much cologne who winds up puking in the bushes on his way home, alone, to masturbate to a Victoria’s Secret catalog.

Despicable Me is not a bad movie. But that’s the thing: All these non-Pixar CGI movies are judged—by everyone, I’m convinced, unconsciously—through the Pixar lens. Despicable Me deserves better than just “not bad—considering it’s not Pixar.” It isn’t overly noisy and shrill (the surest sign of Pixar Paranoia), it doesn’t come across as desperate, and it doesn’t base all its humor on farts and getting hit in the nuts. All of which is sincere but backhanded praise, since I’m complimenting the movie for mistakes it doesn’t make. Such is the state of non-Pixar affairs.

Food: The other seven Fig Newtons, one egg

Trailers: Cats and Dogs, Megamind, Ramona & Beezus, Tangled, Smurfs, Nanny McPhee Returns, and Alpha and Omega (which is a movie about trying to get wolves to fuck. But for kids.)