I’m surprised Dorianne Laux isn’t more popular. Of course, she is a highly regarded poet, and, I would say, a beloved poet by those within the poetry world. Her poems are so accessible, so not-pretentious, it’s curious why she has not acquired the mainstream success of Billy Collins or Mary Oliver. It may be because her work is not as overtly funny as Collins or as overtly Romantic (as in the movement) as Oliver. Rather, Laux’s work skews toward optimistic Realism that is at once both revealing and reassuring. O Magazine, for example, would love her poems, as would its readers. I think of her as the Ricky Lee Jones of poetry. They are often sweet without being sentimental. Her poems are little songs of honest hope.

Her most recent collection, The Book of Men (a generous preview is available on Google Books), finds Laux at her best. She’s witty, engaging, and candid. Readers expecting the book to be a kind of self-help collection that reveals secrets about men and our inexplicable behaviors will be disappointed. Except for the poem “Men,” her book is less a statement on the gender in the macro sense and more about Laux’s relationships with men and the roles various men have played in her life (and her poetry). For example, the opening poem is about a solider she sees in an airport, but other poems flirt with Mick Jagger, Frank O’Hara, Phillip Levine, Superman, and even some monks. The poems don’t really teach us much about men, but they do offer a glimpse into how an insightful woman integrates important male figures into her imagination and her aesthetic.

I say this with a bit of trepidation. It’s dangerous to read poetry as autobiography. However, there is very little within the poems themselves to discourage such an approach. And besides, one of Laux’s strengths is her willingness to break through those poetic walls so many of us construct. She seems to want no distance between herself and her reader.

One way she accomplishes this connection is through her easy diction. Similar to Levine and the young William Carlos Williams, Laux creates the poetic through observation and revelation rather than through syntax. Unlike Jorie Graham or Susan Howe, who tend to rend language, who break it apart and reassemble it, Laux opts to leave language as it is. Words already do what she needs them to do. She rarely deploys the poetic uber-image a la Charles Wright or W. S. Merwin. Her poems almost never reside in the gated community of the abstract lyric. Rather, they set up shop in the apartment building of denotation and declaration. They hang out where you hang out. They talk to you on the bus, they give you advice at the bar, and if you needed, they would hold your hair back as you knelt over the toilet.

Laux might be the master of what I would call the poetics of observation. Sure, she reflects, but she also looks. She watches. She listens. And then she watches again, as in the opening stanza of the book’s opening poem, entitled “Staff Sgt. Metz:”

Metz is alive for now, standing in line
at the airport Starbucks in his camo gear
and buzz cut, his beautiful new
camel-colored suede boots. His hands
are thick-veined. The good blood
still flows through, given an extra surge
when he slurps his latte, a fleck of foam
caught on his bottom lip.

Nothing about this stanza is off-putting. We know airports and Starbucks. The poem is not set in a museum in Florence, a café in Brooklyn, or a field in Aix-en-Provance. We know all the words. In fact, the poet uses colloquialisms. The first two verbs are being verbs. We are not shocked by turns of phrase or linguistic pyrotechnics. Indeed, the scene itself is profoundly unpoetic—an airport Starbucks—and yet, Laux’s opening phrase, “Metz is alive for now,” pushes the poem beyond mere description. The use of “still” as the first word in line six reinforces this observation, reminding us that, in the near future, the man with the beautiful boots and foam-flecked lip might die.

This poem reminded me a great deal of Walt Whitman, and I realized after I finished the book, that echoes of Whitman are everywhere in The Book of Men. No doubt Whitman would have himself liked to write a book with such a title, and no doubt it would be quite a different book, but, I suspect its premise would be similar. Both Whitman and Laux are profoundly democratic poets. Anyone can live in their poems, and their poems can live anywhere. If Whitman were alive today, I have no doubt that he would have written a poem very much like Laux’s “Lost in Costco”—a cool poem that revels in accessible excess. Not surprisingly, Laux’s most frequent poetic technique is also Whitmanian—what we might call a pivoting catalogue—a fondness for lists that spiral out of and toward each other, as in “Gold:”

Color of JCPenny’s jewelry, trinket
in a Cracker Jack box, color of roadside
weeds, candy wrapper in a gutter. Color

of streamers tied to the handlebars
of a rusty bike, color of rust on the bike’s
dented fender. Color of food stamps
and welfare checks, dirt swept into
the long hole of the missing board
on the back porch, the untended sore,
phegm in the hotel toilet bowl

I wanted to wear a lantern
for a hat, a cabbage, a piñata
and walk in thigh-high boots
with six-inch heels that buttoned
up the back. I wanted her
rouged cheek bones and her
throaty panache, her voice
of gravel and clover, the hokum
of her clothes: black fishnet
and pink pom-poms, frilled
halter-tops, fringed bells

To list is, on some level, to fly in the face of poetry. Before Whitman, poetry was about compression. Not only that, it was about lyrical compression—compactness forged in the fire of language. Words melded. But, like Whitman, Laux’s work is the poetry of accrual. Like a snowman, it gains girth as it rolls along. In “Cher,” the entire poem is a list of descriptors both plain and precise. Only two verbs activate the poem—and it’s the same verb—“wanted.” The movement comes in the swivels, the mini voltas that spin the poem along its axis. And, of course, how fitting to write a catalogue poem about J.C. Penney’s. It is as if the form was made for such a poem. 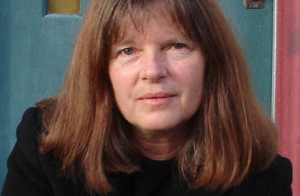 As it happens, form is the least compelling component of The Book of Men. Her sense of structure, line, and meter are neither bad nor unpleasing. Form is just sort of a non-issue. Her interests lie elsewhere, except for once instance. As an experiment of sorts, three random poems are constructed in a way so that every line in the poem ends with the same or similar sound. I’m not sure the poems always work, but they are fun and come as a pleasant surprise. Most of the time, Laux formats her lines in such a way to facilitate the poem’s orality. I always feel like I can hear her poems being spoken. Her line length corresponds well to conversational pacing and breathing.

A good example of this occurs in my favorite poem from The Book of Men, the fantastic “Antilamentation,” which functions as a signature poem for the collection. Part catalogue, part self-help manifesto, this is the kind of poem that should make Laux a star:

Regret nothing. Not the cruel novels you read
to the end just to find out who killed the cook, not
the insipid movies that made you cry in the dark,
in spite of your intelligence, your sophistication, not
the lover you left quivering in a hotel parking lot,
the one you beat to the punch line, the door or the one
or the one who left you in your red dress and shoes, the ones
that crimped your toes, don’t regret those.

I’ll let the reader have the pleasure of finishing the poem, but I will add that this is one of those rare moments in contemporary poetry when I actually wished the poem was longer. I did not want the poem to end.

Many old and new readers will feel the same about this book.