Though Guantanamo Bay is no longer in the daily headlines, it remains very much open and operating. Dave Engelhardt was a pro bono lawyer for several prisoners detained at Guantanamo Bay, and spoke with Paula Whyman about his work there.

Paula: How did you get involved in representing Guantanamo detainees?

Dave: More than politics, or even my obligations to the bar, I had to do it because of my regard for a colleague, who was staying in the hotel at the World Trade Center when the planes hit the towers. The hotel took a lot of collateral damage, and before it collapsed some firemen tied him in a fire hose and lowered him from his window, and at some point, he slammed his head against the wall or the ground or something, and could have died, but got out of the hospital in a few short months, and upon returning to the office – took on the representation of three detainees.  When he asked for help, what else could I say?  It was one of the finest examples of citizenship I’ve ever encountered.

Paula: Were any of the men you represented among those we’ve heard about who died mysteriously?

Dave: One died, in a suicide pact with two other detainees, after being cleared of being a threat.

Paula: He died after being cleared??

Dave: After he died, we had a private autopsy performed, visited the family in Yemen, and fought to learn more about the circumstances of his detention and death. Through a Freedom of Information Act (FOIA) release, we found that he was officially cleared of being a threat to the US, his detention was in error, the US wanted to release him but didn’t know how to do it without embarrassing themselves, and – get this – the finding of his innocence was a state secret, and could not be told, even to HIM, who, lacking this knowledge, hanged himself.

Paula: He never knew he was cleared, so he died…and then he was a threat again…?

Dave: After the suicides, the geniuses who ran Gitmo announced that the suicides themselves were acts of aggression against the US, calculated to threaten our national security by calling the world’s attention to what the government was doing; and that, no matter what he did or did not do before his detention, his actions while in detention proved that he was an enemy of “freedom,” a word which can only draw mockery when spoken by a servant of the last president.  The logic was this: we kept him so long, we made him hate us; and once he hated us, we had to keep him forever; and when he complained about being kept forever, it proved that the government was right to keep him forever.

Paula: Stop, you’re making me dizzy. You mentioned that something strange happened when one of your staffers visited the dead man’s mother.  Can you elaborate?

Dave: I sent a young associate to meet with the dead detainee’s family in Yemen, describe our FOIA action, discuss their potential remedies, get their consent to the autopsy, which is some major degree of no-no in their religion.  The associate took along some of the few publicly available, and fairly generic, photos of the inside of Gitmo.  One showed  a young man shackled to a gurney being carried by two Marines.  The mother said, “My OTHER son, who’s been missing all these years!”  We got him a lawyer; don’t know if he ever got out.

Paula: So if this man’s brother hadn’t died, if you hadn’t contacted them, they might never have learned the whereabouts of their other son. I wonder how many others there are like that. What about your other two clients?

Paula: Did anyone call his bluff?

Dave: He was considered a national treasure, and his word did not cause grown men to fall on the floor and laugh till it hurt, which was MY initial reaction, but was used to keep people in detention, especially people on whom there was no other “evidence.”

Paula: As shocking as that sounds, it’s pretty much in line with the behavior we came to expect from that administration, isn’t it?

Dave: The same idiots who spent a trillion dollars searching for the WMDs that, they righteously assured us, were surely hidden up a camel’s bunghole somewhere in Mesopotamia, only to come up with a finding of “oops,” later assured us that each and every detainee was, in Rumsfeld’s words, “the worst of the worst.”  He might have added, “And if they aren’t yet, then by gumption, we’ll make ’em that way, because this America, and we can make anything!”

I never doubted that some detainees really were the worst of the worst. Hell, some of them affirmatively boast if being killers, and for them and many others, detention is necessary, and I’m all for it. But it was equally obvious to me that some were picked up by mistake, if you knew anything at all about the way they were picked up. So a little old fashioned due process was in order, to separate the threats from the mistakes. It was stunning to see an elected government resist due process so viciously, and to assume they could get away with chanting “worst of the worst,” and hope no one would inquire. 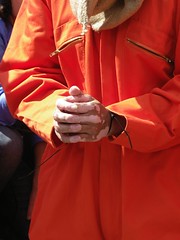 Paula: Have you received any threats, veiled or otherwise, as a result of this work?

Dave: Some hack lawyers in the Bush administration approached large corporations with a list of firms doing the pro bono work, and asked the corporations to cut off billable work.  The list of firms was long, and included all the top names in DC and NY. The corporate clients, through their general counsels, and much to their credit, hooted down the very idea.

Dave: In the realm of magical fundamentalist “thinking” that was the Bush administration, they had, in my not so charitable view, lawyers who were not lawyers, from law schools that were not law schools.  To me, they were religious zealots trained at the so-called universities run by Pat Robertson and the like.  They didn’t see themselves as servants of the profession or the courts, but of their own strange religion, in which Jesus is some sort of kick-ass commando in a bloody rage against liberals.  Maybe I’m not a careful reader, but I missed that bit in the Bible.  Redneckius, Chapter 1, verse 3?  In all seriousness, they couldn’t even get job interviews with the firms they were attacking, but were entrusted to decide issues of state.

Paula: There’s a lot more to say about this than we have space for here.  Have you thought about doing a book?

Dave: No, there are people who were more deeply involved.  I’m just the most opinionated.

Paula Whyman writes fiction, humor, and interviews. Her fiction is forthcoming in Gargoyle magazine, and she was recently awarded a MacDowell Colony Fellowship. For more, see www.paulawhyman.com. More from this author →