It’s magic hour on a Thursday. In my living room I do side planks on a mat for 90 seconds, and then 10 hard chin-ups in three sets.  I put weights in my backpack and feel like Superman, crushing 25 decline push-ups off a wooden chair in the kitchen. I track my progress in a softcover Moleskine, remember when doing a single sit-up made me nauseous with anxiety, the way it pushed me to be in my body. Now I feel the burn and figure I’m growing.

I knock out bicep curls and keep the off arm stabilized, tracking the angle in the bathroom mirror. I watch the veins in my arms vibrate with the blood from my heart; I think about my heart and how it is a rocketing engine.

I remember that I can look myself in the eye now; when I do I am always glad that I look more and more like what I expect.

On my walk from Ruggles through the Fens to my job on Brookline Ave, I pass four windows that echo my reflection back to me: the one at Northeastern, the taco place before the park, and finally the office building next to my own. Each day I watch myself change. As winter turns to spring, I am like a flipbook: broadening out, tapering in.

Sometimes a Northeastern co-ed will smile at me, and I feel myself go scarlet, my heart galloping with pleasure and possibility, the sun in my eyes.

In my Tuesday night meditation class, we are told to think of one aspect of our lives that we wouldn’t change. I cheat and contemplate the clothes that my body expands into, like a balloon taking shape. Change is, after all, the point.

I meet a publicist I’ve emailed with for months, a brash woman with long ringlets and glasses. She hands me press tickets and smiles with lipstick teeth, a crowd of other reporters milling around her.

“Oh,” she says to me, satisfied, “so you ARE a man.” I have no idea why she says this, and I can’t decide what to do with my face. My breath hisses out slowly, the others looking briefly in my direction, then away.

“In the request I got for tickets, whoever asked for them referred to you as Thomas but also as a ‘she,’ and I thought that must have been a typo—but you never know these days,” she winked. I laugh, falsely, like I am in on the joke, not the joke itself. I am immediately ashamed at my own reaction.

I didn’t even speak, so she could hear my low voice, confirmation of my maleness, the testosterone’s greatest coup. I just stood there, feeling ugly and exposed in my teenage scruff, all smiles.

Do you notice how often you find yourself in a circle of near-strangers? Outside, during a mid-morning fire drill, huddled with the medical supply company from the second floor, a group full of smokers in high heels and ties. Or the party at a friend of a friend’s, the hodgepodge of college friends and coworkers, mixed uneasily in the kitchen. Or when the neighbors are in the backyard with a family from down the street, everyone gripping microbrews and taking a step back, making space for you.

Lately, mostly men turn toward me after the initial introduction. They volley friendly, empty conversation: What do you do? What brings you here? The rhythm is off, always, and there is a pause that goes on forever sometimes, a hiccup before the inevitable disengagement.

I wonder: Can they tell?  Tell what, I’m not sure. That I’m not one of them, that I never meant to be, that I won’t be ever, not really. Every once in awhile I luck out and find myself alone with a certain kind of man—a breed of nerd or queer dude or artist—and the words soften like butter into something palatable. We make fun of meatheads or speak excitedly and off-script about boxing or cocktails or astrology or someone says, What are you working on, Thom? And I tell them about my encyclopedia of human monsters and feel my shoulders lower, encouraged.

But usually I find myself talking to a woman, sensing the relief of the guy who’s gone back to shooting the shit with his friends, maybe wondering what’s my problem, anyway.

I spent elementary school with boys who enjoyed my dirty-knee novelty. I was never the last kid picked in gym, but I saw the ones who were: the big-eared kid who had a little sister with Downs syndrome who’d yell encouragements to him through the chainlink fence in a voice the meaner boys mocked later. He was athletic enough, with freckles and a disciplined swing. He seemed baffled by the way they’d turn on him, mocking the van his sister came to pick him up in: the way his face looked, like the rules had suddenly changed, that’s how I feel more often than not. 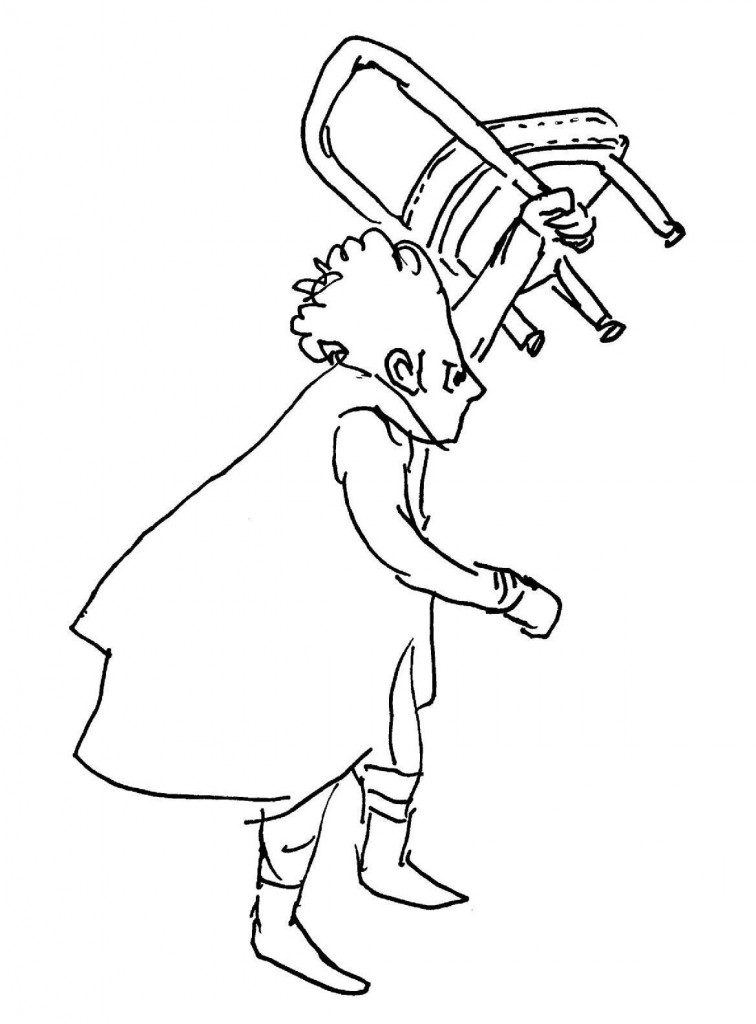 I take the commuter rail an hour home to Providence from Boston’s South Station. In my car is a young guy with a bad, spiky haircut and an ill-fitting, expensive suit whose face is still red from earlier, when a homeless woman chased him with a chair.

The thing is, his pride got in his way. We all saw it happen, in the lobby, under the ticker board. She shrilled something about him taking her picture. He got cocky, called her crazy. She ran at him and he took off like a little kid playing chase. It’s true I took a perverse pleasure in it at first, until she picked up the chair.

The guy was freaked out, but you could see some schoolyard psychology at work as he turned to face her. The lady waved the chair like a rodeo rope. “Go ahead and hit me,” he said, jutting out his jaw as if to give her a target.

“We should do something,” a guy about his age said. I wasn’t sure if he meant the two of us, but I murmured noncommittally. What reaction was expected of me?

Luckily, she put the chair down without intervention, and I got the feeling staying out of it allowed the kid his pride. He rejoined us, agitated, his hair mussed. “I didn’t take her picture,” he said. His would-be savior clasped his shoulder comfortingly. “That was fucked up,” the guy confirmed in gentle tones.

The Providence train arrived and so we walked toward the platform en masse, and I saw the woman bumrush him again, her eyes wild, spraying him with a yellowing bottle of perfume. “This is what you get!” she said, leaving him choking in a cloud of lilacs.

It was late once the train chugged to life. I found myself down wind from the still-blushing man. He fiddled with his phone, presumably explaining the encounter to whomever would need to roll down the car window after collecting him. He shook his head periodically, though he surely couldn’t have known that I looked to him and his humiliation, wondering how a man who is not trans feels when he is so publicly undermined.

He got off at Sharon and we carried on into the night, the smell eventually dissipating. Crossing my legs, I was myself in the sleepy silence of the near-empty train car, beyond the brutality of a boyhood I never really had, the friend who tells my wife that I am “lovely, but too small” to hold my own in a fight against a meth head who’d recently harassed her. In the dark window before me, the landscape rushed past invisibly and I am just Thomas: a man for all the world, a body blurring into something else entirely.