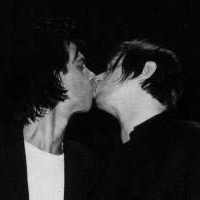 Do you ever have one of those days where you just need to cry your eyes out?

There’s no better soundtrack for your sobs than “The Weeping Song.”

Watch the video as it makes weeping a positive experience when Nick and Blixa are on the boat on fake water.

How much fun is it to see Nick and Blixa dance together?

Let’s weep together with some live footage:

Isn’t Blixa’s voice sexy? He is the lead singer of Einsturzende Neubauten and has spent decades as a front man himself.

What do you do when Blixa leaves The Bad Seeds and you need to perform it live?

Hell, Nick just sings both parts of the song. Check him out in 2009:

“The Weeping Song” was released in 1990 on The Good Son. We’ll definitely revisit that release in future Nick Cave Mondays.

Crying is fun if you do it with Nick Cave and the Bad Seeds.

Thanks for reading and stay tuned next week for another installment of Nick Cave Monday.

Endnote: Crime and the City Solution are legends and part of the Bad Seeds family. Lead by Simon Bonney, this tour and reunion is the best live show to see this year. They are performing smaller venues in preparation for their long awaited 2013 release, “American Twilight.”

Any fan of Nick Cave should not miss this tour.

I don’t know how Simon did it, but he looks like he hasn’t aged in 30 years.

Crime and the City Solution also had a starring role in Wim Wenders’ film “Wings of Desire.” Check out “Six Bells Chime.”

Trust me, do not miss these shows. See you at Slim’s on Wednesday.