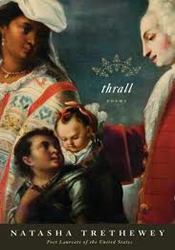 In many ways, Natasha Trethewey continues in Thrall, her newest collection of poems, themes and ideas started in Native Guard, her previous Pulitzer Prize-winning book. In both collections, she examines identity and race. What is remarkable about Trethewey’s approach to these issues is the emotional distance she maintains from the incredibly personal subject matter. She deals with what it means to be a biracial woman in Mississippi through filters and layers, which in the end deliver a more emotional punch than if she addressed her experiences directly.

The need to record runs through so much of Trethewey’s work. Where Native Guard worked to erect a monument to her mother, Thrall tries to construct a memorial to her father. She dedicates “Elegy,” the book’s first poem, to him. She describes the two of them, daughter and father, fishing for trout. The poem stands as a testament to the need to record moments like those for posterity. She begins sentences with such imperatives as “You must remember how…” and “Perhaps you recall… ” She explains, “… I can tell you now //that I tried to take it all in, record it / for an elegy I’d write — one day —//when the time came. …” This idea is a theme of the collection, showing up in poems like “Miracle of the Black Leg,” where she writes, “…—in words / or wood or paint—is a record of thought.”

Given Trethewey’s drive to record moments, it makes sense that she relies so much on ekphrastic poetry that responds to photographs and paintings, still image of captured moments. She uses them in Thrall to study the mixing of races and genders from history, seeking to identify and highlight the inherent hierarchies. In “Kitchen Maid with Supper at Emmaus, or The Mulata,” which responds to a seventeenth century painting by Diego Velazquez, she describes this kitchen maid by identifying objects and colors around her: “his white corona, her white cap.” This sonnet lists what the woman is, “the mortar / and the pestle at rest in the mortar…” and:

the stack of bowls
and the bulb of garlic beside it, the basket hung
by a nail on the wall and the white cloth bundled
in it, the rag in the foreground recalling her hand.

How perfect the double meaning of the verb “recalling,” how telling to the poem and the collection. The poem ends, “Listening, she leans / into what she knows. Light falls on half her face.” The words light and half hold further significance, knowing from the title of the painting that the kitchen maid is of mixed race, knowing from her own description and exploration that the author is as well, give this incredible poem layers of meaning and impact.

Through these pieces of art, Trethewey couches her own, making her experience and wisdom transcend her time and her place. In “Help, 1968,” part three of a series called, “The Americans,” Trethewey examines a Robert Frank photograph of the same name. She writes, “…That year, // when my mother took me for walks, / she was mistaken again and again / for my maid.” She then writes that when her mother corrected strangers, telling them the child was her daughter, the strangers gave money, as if she couldn’t otherwise survive. I lingered on this point for a long time. The part of the country that identifies itself with an almost militant Christian, the South, only felt charity was necessary if a white child was involved. I still linger on this, even as a life-long Southerner. “Help, 1969” ends,

…How
like the woman in the photograph
she must have seemed, carrying me
each day—white in her arms—as if
she were a prop: a black backdrop,
the dark foil in this American story.

With this conclusion we see how Trethewey is describing her own search for identity in the photographs, but beyond that, she sees our collective history and identity.

Though Thrall and Native Guard share similarities, Trethewey’s work continues to evolve and grow. The most noticeable difference between the two volumes is the length of her poems. Most poems in Native Guard were consigned to one page, often ending each poem succinctly and cleanly. In Thrall, though, she keeps writing past what feels like natural endings. For instance, in “Enlightenment,” she describes a visit to Monticello with her father. The poem feels like it is closing, like a poked clamshell, after a fellow tourist asks a question about Sally Hemings. The tourist asks,

How white was she?—parsing the fractions

as if to name what made her worthy

of Jefferson’s attention: a near-white,

To me as a reader, I feel she establishes all she needed to in the poem at that point; she discusses how the relationship between daughter and father has changed, how different the experience must be for a biracial daughter and her white father to hear a history that favored the white male over the woman whose “whiteness” could be questioned and debated, and what all of this would mean to listeners in different situations. The poem feels complete. However, Trethewey writes on, making a joke to diffuse the tension, and the poem culminates with the gorgeous tercet, “I’ve made a joke of it, this history / that links us—white father, black daughter— / even as it renders us other to each other.” 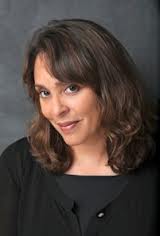 Trethewey renders us to ourselves as well, showing how the search for identity of one woman can represent our American search for identity. Trethewey’s literary lineage is long and important. Since before the Civil War, Southern authors have struggled with identity in a part of the country that has historically been xenophobic at best and violent at its worst. Many authors have composed around this tension, like Tennessee Williams exploring Southern homosexuality, Zora Neale Hurston describing the moment when she realized her race in “How It Feels to be Colored Me,” and Tino Villanueva remembering how a film showed him what it meant to be Mexican in Texas in Scene from the Movie GIANT.

Perhaps because I am Southern and understand how to love and hate a place at the same time, and perhaps I understand more than I care to about how hateful and violent some parts of the South can be toward anyone different, but I feel a particular kinship with Trethewey’s work. I understand it. I understand how hurt and fear can be tied to geography, but the land itself is so lush and giving and forgiving that direct hatred and anger seem impossible. To me, Trethewey’s use of emotional restraint are necessary. To deal with the complicated issue of what it means to be different in a homogenized space is too hard to do directly without the emotion and pain to cloud insight. Her choices and distance are masterful. She employs no direct righteous indignation, lectures, blame, or self-pitying. Not here. Instead we are given art, like Williams, Hurston, and Villanueva before her, that shows us a specific situation, how difficult finding and maintaining one’s identity in a malicious environment can be. What is amazing about Trethewey’s poetry is not that her poetic project remains always focused on the struggle for identity. What is amazing is how she somehow manages to keep the poetry interesting and impactful. American poetry is incredibly lucky to have her.