The Illustrated Press: Chicago is a guide to a changing, vibrant city, captured through the writing of Darryl Holliday and the illustrations of Erik Nelson Rodriguez. In stories about subjects minor and major, the authors provide a sense of Chicago and its people. Darryl spoke with me about his reporting, his collaborations with Erik Rodriguez, and what they’re working on next. The Rumpus: What was your background in reporting before you started this project? What about in comics?

Darryl Holliday: I went to Columbia College for journalism and was interning at the Chicago Sun-Times when we first started working on our first couple of comics. The job was a great experience but that was when I first started feeling the limits of traditional print journalism. Other than that, I had freelanced a bit with some hyperlocal outlets and worked full-time at the Columbia Chronicle, my college paper—where Erik was the graphic designer at the time. That’s how we met actually.

As for comics: it’s a pretty short story. I’ve been reading them since I was a kid, cutting out Spiderman and Green Lantern graphics from Wizard mag for my wall—but the idea of mixing comics with journalism took a while to come around. Rumpus: What made you want to do this project as a comic rather than just general reporting? What drew you to the format?

Holliday: I guess it goes back to that rigidity I often see in traditional reporting. Which isn’t a bad thing in itself—there’s probably some sort of merit in inflexibility. But I wanted to play with the form a bit. There’s that old adage about learning ‘the rules’ before breaking them and, I mean, I paid a stout fee for my journalism degree, so I felt it was a good time to take the rules and run. The project/book was a way to see how far we go. Aside from that, comics journalism has a level of immersion and engagement that isn’t typically in the worldview of traditional reporting. That’s what initially drew me to it. The way we can report from the ground, quote directly and be involved in peoples’ lives but still play with visual perceptions. We’re not afraid to admit that we use our filters—we’re not stenographers, you know? By that I mean, we report what we see and hear, but we don’t consider ‘complete objectivity’ a blanket rule. Comics journalism lets us be both accurate and experimental. 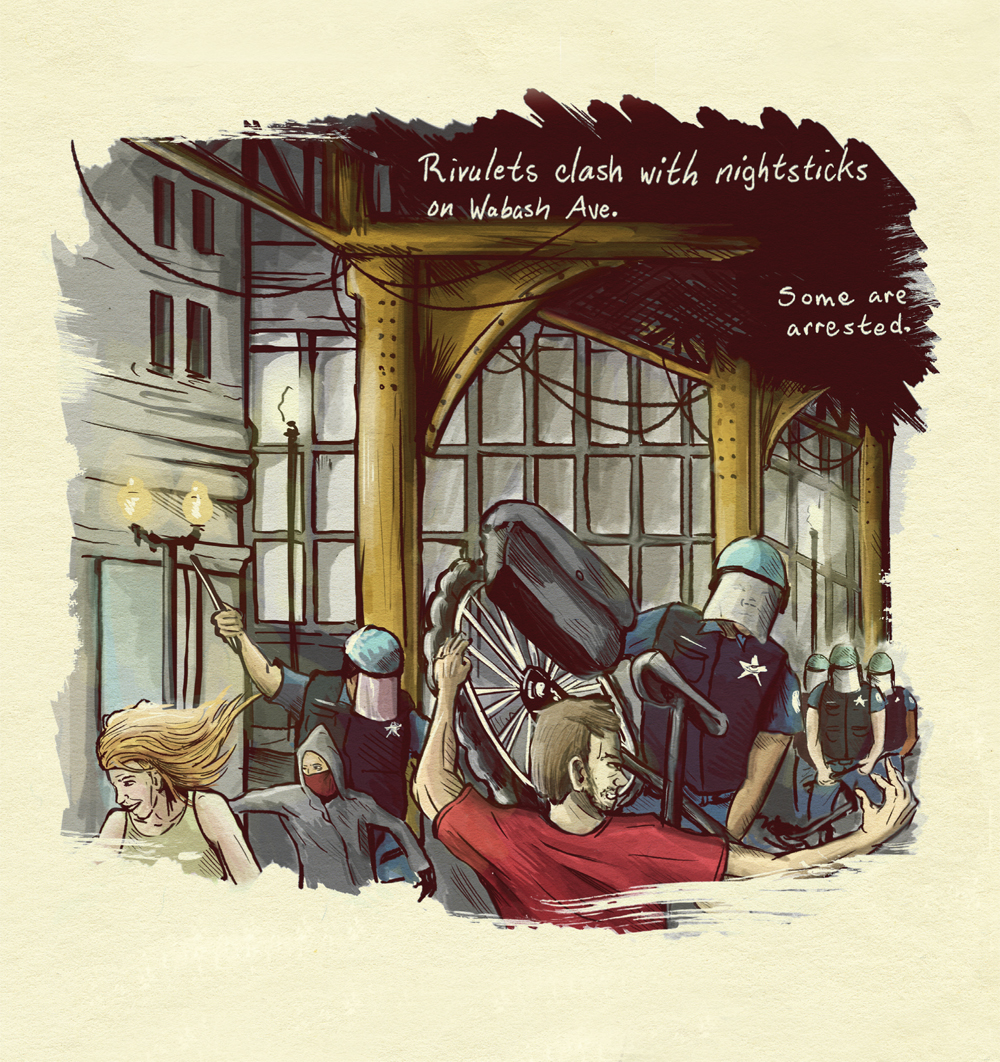 Rumpus: What drew you to Erik’s art? Were there other artists you considered working with, or did you know from the beginning who you wanted to work with?

Holliday: He’s just an amazing artist. We had worked together at our (former) college paper so we were familiar with each other’s work for a while. He’d make these really bold graphics for my stories before I ever realized how illustration could be used in news. I knew he was the right one to work with pretty early on. He’s got this great range of style, understands the ethics of reporting, is up for trying new ideas and brings great beer to our storyboarding sessions.

All of that, and deadlines. He kicks the shit out of deadlines.

Rumpus: You talk in your introduction about where news is headed and note that “We think comics journalism has the potential to incite new ways of thinking about what non-fiction storytelling can be.” What do you see in store for news, and for comics?

Holliday: I think, at its best, this sort of reporting shows how journalism and narrative non-fiction can share space with art. Journalism tends to revel in this sense of being involved with people but separated from them by objectivity. We’re supposed to be rational observers of the public and not personally affected. It’s all very high-minded. But I like people, and I love stories. I think there’s something very personal about using someone’s words and likeness to tell their story. It involves a trust and closeness that you don’t get parachuting down for a news story where all you need is a quote or two so you can file by deadline. I think, ideally, comics journalism creates new layers of dialogue and understanding between readers, writers and subjects/sources. I like to think new media is increasingly open to exploring that idea. Holliday: I’ve actually been keeping track of that story in particular. The only problem is that the trial is repeatedly held up for any number of reasons. The court/prison system here is wonky, and awfully circuitous. So, it could definitely end up happening one day, but there’s no telling when. I’d love to continue Wedlock, but that’s pretty much the only story from the book I’d consider revisiting. Both Erik and I would like to work on a book-length comic. We’re working on smaller pieces at the moment, but will likely launch into a full book-length story when those are wrapped up.

Rumpus: What’s your next project? Will it utilize the same format? Will you and Erik be working together again?

Holliday: We’re working on a story with some amazing producers over at WBEZ (Chicago’s NPR) for our next project. We’ve partnered up with a new program at the station called Curious City. They’ve got a similar aesthetic and outlook, especially when it comes to local peculiarities and reporting directly with the public, so we’re excited about the project. It’s an online comic plus an audio segment answering a question from a life-long Chicagoan. We’ve also been tooling around with pop-up layers for the story, so it’ll have the added benefit of audio/video clips, maps and pictures, etc.—the idea being to find ways to tell more interactive stories.

And yeah, Erik and I are working together on it. We’re long-term co-conspirators. Holliday: We like random book/article/story suggestions and rambling notes about whatever concerns you—[email protected]

Rumpus: Any other places we can see your or Erik’s other work?

Holliday: Aside from releasing The Illustrated Press: Chicago book, both of us are pretty active in the journalism/graphic art world. Erik is the art director for the Columbia Chronicle and R_Wurd, a local youth-generated magazine. His website is here. I report for DNAinfo.com, and I’ll be teaching an art/news literacy community workshop to high schoolers in Englewood. We tend to pick up new projects often, so people can check our main site for any updates.

The Illustrated Press will also be featured in our own exhibit at Chicago’s Harold Washington Library this year. Our story “Home in One Place: A South Side Story” will be on display in the main hall. 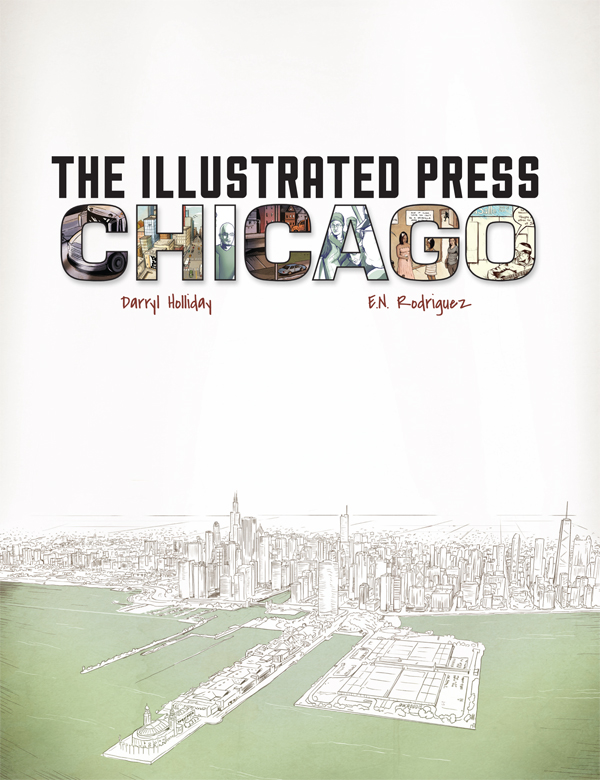