Not long before his suicide in April 1972, Yasunari Kawabata did something that has perplexed me for years. I’m still not sure what to make of it and I only mention it because it’s been on my mind this morning. Something about this morning sun after last night’s hard rain. I was up much of the night listening to the wind pierce the cracks in the walls. Even the dog was terrified and hid in the closet. Woke up groggy and murderous for coffee (finding none), went outside and there it was the sun on the wet grass, and I thought, damn, I’m alive.

And I remembered this odd fact I once read about Kawabata. How three months before his death he took one of his most loved novels, Snow Country, and turned it into a very short story – what he called, beautifully, a palm of the hand story.[1] “Gleanings from Snow Country” (published posthumously in the fall of 1972) consists entirely of scenes from the novel with everything else cut out. You could make an argument that this was a last ditch effort of a great writer with diminishing powers, that by returning to an old story, Kawabata was trying to recapture former glory. There is something about our own past words that is comforting. Did I actually think that? Write that? You know what I mean? When you don’t recognize the you in your own words? When the you who wrote them is long gone and you can only go back and be with that person on a flat, silent page? 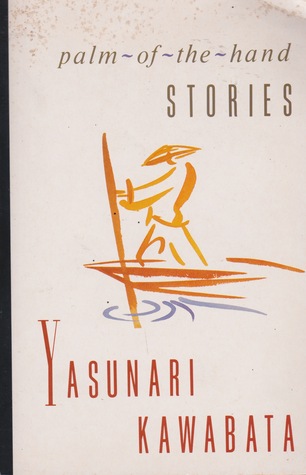 But this morning I wonder if it wasn’t something else that was motivating Kawabata to return to Snow Country. I think he may have suspected there was more to be found there, at least one more wrenching layer. I can’t seem to find Snow Country on my shelves and so can’t re-read it, but what I remember of the novel is not what happened (I’m not a reader who needs much to happen, for me life is enough of a roller coaster as it is) but how it made me feel a little more present in the physical world. I spend so much time in my own head that I forget what it is like to stick my face in the snow and know the cold. And I think of that novel and I remember the scene on the train and Shimamura watching the reflection of a girl, a fellow passenger, superimposed in the window as the dark, snowy country rolls ceaselessly beyond her like a double-exposed motion picture. In turning an already aching novel into a story, Kawabata may have been trying to isolate only the most essential images. But “Gleanings” is not a greatest hits of Snow Country; if it was, it would fail. What story does, I believe, is capture not only the essence of the novel, but also, using the same characters and scenes, another, entirely new spirit.

Borges says somewhere that he was pretty good at beginnings and endings of stories. It was middles that always gave him a headache, and so he avoided them. Halleluiah. In so many cases, aren’t the middles the problem? In life? In art? Something similar is going on here except that Kawabata doesn’t simply condense the book by doing away with the middle, he chooses scenes that are mostly from early in the novel to create an independent story that is suggestive rather than conclusive.

In the story we know little about Shimamura. In the novel, if I remember, he’s got a wife and maybe a family back in Tokyo. In the story there is no context, no backstory. He’s a man taking a train to small village in the mountains. His heading for a hot-springs inn he’s apparently stayed before to see a woman he hasn’t seen in a long time. The story consists of the scene on the train followed by nine scenes of Shimamura with the unnamed woman who works as a geisha. The two of them seem to love each other, and this love, unlike in the novel (if I remember) is doomed less by external circumstances (the hideous class differences separating them, her work, his family) but because it is doomed, period. Kawabata, always a death-obsessed writer, may have felt Snow Country no longer needed backstory. What’s backstory – or even the rest of the story itself – to the ultimate story, the darkness that was closing on him?

To give one small example of what I’m trying to say, in Snow Country the two are haunted by Tokyo itself, by the fact that Shimamura must return there; in the story, they are haunted by the mere sound of the steam whistle of the midnight train to Tokyo as it drifts up to their room from the valley.

And sex – how could I leave this out? Because there isn’t any. This may be the majestic genius of the story, there isn’t any sex, and yet, “Gleamings from Snow Country” drips with it. It’s got more sex than stories with sex, which too often are less about sex than ego. In prose, for me anyway, not getting it is far more sweat inducing than getting it. And here, instead of flesh, Kawabata gives us something far more complicated and disturbing.

His hand was inside the neck of her kimono.

She did not respond to his request. The woman folded her arms to bar the way to what Shimamura sought, but, numb with drunkenness, she had no strength.

“What’s this? Damn you. Damn you. It won’t move this arm!” She suddenly put her head down on her own arm. Startled, he let go. There were deep tooth marks on her arm.

And, of course, in both the novel and the story, there is the snow and the mountains, all the dark mountains, mountains beyond mountains, bright with snow. 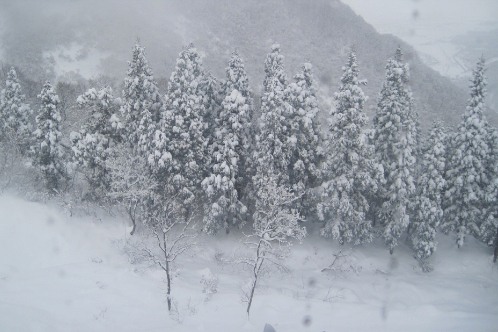 Was the sun about to rise? The brilliance of the snow in the mirror increased as if it were burning cold. And with it the purple-black luster of the woman’s hair in the mirror grew deeper.

Why is the snow that much more impenetrable in the story? Burning cold. With so fewer words, certain details, snow, tooth marks, gain a stranger power. The desolation connecting these two characters becomes – how is it possible? – more extreme.

[1] Allow me this brief opportunity to state my general opposition to calling a short story anything other than a short story no matter how short – this includes such unnecessary nicknames as short-short or flash or micro-fiction. Is the story of Jonah and the whale a micro-fiction? These terms diminish good stories and often elevate bad ones as if by being part of a sub-genre it is all right if they’re thin. Yet, I find Kawabata’s name for his own uniquely brief stories beautiful and apt. So what the hell do I know?