I recently finished a powerful book about a journey to find the origin of a name. It’s called the The Fiddler on Pantico Run: An African Warrior, His White Descendants, A Search for Family by Joe Mozingo. The book details Mozingo’s search for the origin of the name “Mozingo,” which, he comes to understand, is one of the few African names to survive not only the Middle Passage, but the history of American slavery itself.

The book takes Mozingo, a Los Angeles Times reporter, on a great chase—from Los Angeles, to the American South, to Angola—as he traces the history of the first American Mozingo, Edward Mozingo, a former slave from West-Central Africa who eventually won his freedom by suing for it in a Virginia court. Some Mozingos fought for the Union; others for the Confederacy. Some were abolitionists; others were in the Ku Klux Klan. One thing they all have in common is Edward Mozingo, a man who—in spite of everything—held onto his royal name.

As somebody with very little knowledge of my own name (I’ve always been told we were trouble-making Hungarian Jews—or were part of the Austro-Hungarian Empire, anyway), the name “Orner” apparently means, I’m told, in French, “to decorate.” I’m sure, though, my own quest, should I ever decide to get to the bottom of my name, will be far less interesting than Mozingo’s. I was moved by the book and Mozingo’s thoughtful prose. He’s a humble narrator, not one of those voices that come at you with all the answers. This is a book about what we don’t know about ourselves. Mozingo’s cluelessness (I mean this in the best sense: we should all be as forthcoming about what we don’t know) is not only endearing and honest, it’s profound. What we don’t know about the names we lug around with us our whole lives might be a key to solving the racial divide we can never seem to get over. We know that deep down—somewhere deep in our roots—we’re all connected. The rare and great thing about Fiddler on Pantico Run is that Joe Mozingo is able to prove it.

The Rumpus: Your story is especially remarkable in that Mozingo is only one of two African names to survive slavery. Since you had no idea how significant your name actually was when you went into this, could you trace how the revelation came about?

Joe Mozingo: The understanding that I descended from this African man who kept his African name came in different waves. First there was puzzlement—how could this be?—then deep curiosity, then frustration, and eventually this exhilaration. The frustration was this: I needed to envision my ancestor, Edward, but subconsciously I harbored this white-black binary view that has been bestowed to us by American history. I was white. So it was hard to envision him as my ancestor at first. But that blockage gave way as I researched more, visited the places Edward lived, met more Mozingos—black, white, and in-between—and went to Africa. The exhilaration came then, when I felt that link to him, to this lineage spinning back to the beginning. In Angola, where he sailed off into the Atlantic for Jamestown, that connection to this eternal system just welled up inside. It was this great feeling of opening up.

Rumpus: I was struck by your bringing into the discussion of your own family history one of the great characters in our literature, Faulkner’s Joe Christmas from Light in August. How does the fictional Christmas figure into your story? 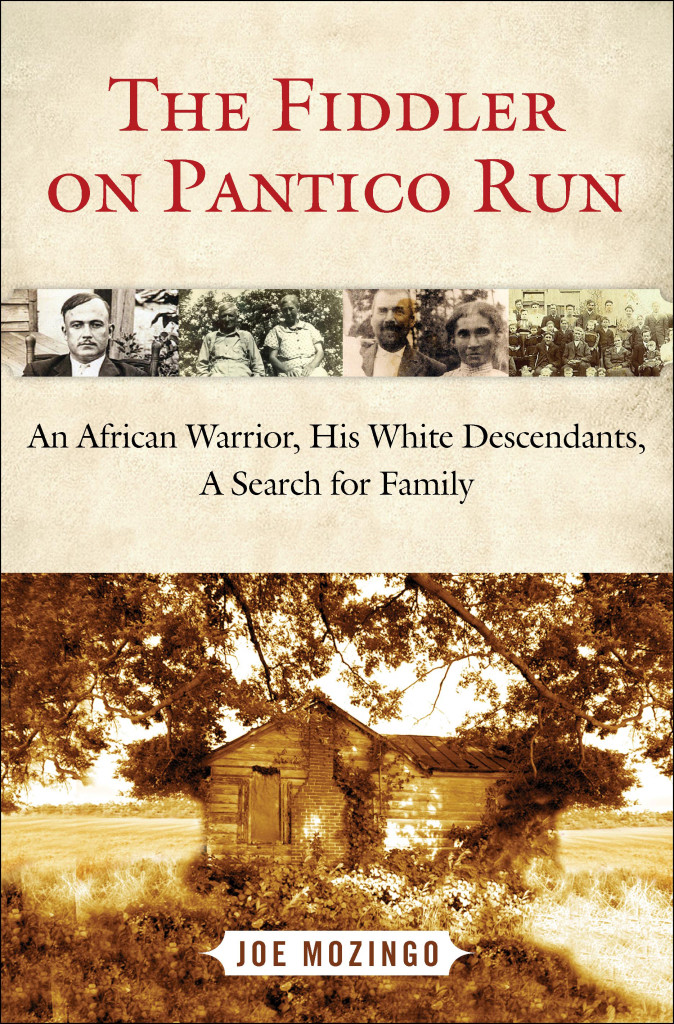 Mozingo: What little I heard as a child about my father’s family’s past always carried this scent of dysfunction, a sourness. Brothers didn’t get along, no land was passed down, no family lore existed. We didn’t know where our name came from. When I researched the book, I followed our lineage back to a man, Spencer Mozingo, who looks to have been the orphaned child of an unwed, mixed-race mother in the mid-1700s. He lived next to James Madison, but in poverty. As he grew older, he seemed to have fractious relationships with his children, and he died alone and poor in Kentucky. The more I learned about him, the more I saw this Joe Christmas-type character. Like Christmas, Spencer had one foot across the color line. Officially, he was white, on censuses and court records, but he had this weird name, and no standing in the white world, and he was undoubtedly darker-skinned.  Suspicion had to surround him. I couldn’t know everything about him that I wanted to understand; poor people’s lives were mostly undocumented. So Light in August gave me this oblique view that I couldn’t get through the records: of this rough-cut soul exiled from both worlds, white and black. Writing the book, I relied on Faulkner to flesh out my ancestor’s life because the author had this proximity to that Southern burden of ancestry and the past that I couldn’t truly know having grown up in Southern California, a place where the past was effectively erased.

Rumpus: The book is as much about our more troubled past as our distant past. At one point you evoke Faulkner when discussing a case involving one of your distant relatives (on the black Mozingo side), to explain what may have been in the mind of the judge who changed his mind after first not declaring him at fault in a car accident case. Upon finding out your relative was black, the judge reversed course. Why did you bring in Faulkner in this instance?

Mozingo: Another part of the reason I employed Faulkner was that I wanted readers to realize the story I was telling was not a freak occurrence in American history. The point was, Look here, one of our greatest novels revolved around the wrath that mixed lineage stirred in people. It threatened the construct of “whiteness,” as shown in that scene. If everyone thinks the guy in the car accident is white, and he obviously has lots of white ancestry, what exactly makes him not white? So many of these stories I was digging up in my reporting had parallel reverberations in Faulkner’s book, I just couldn’t resist using some of his dialogue in a few scenes to give them both blood and credence.

Rumpus: In addition to Faulkner, you quote another writer with an especially complicated and nuanced view of our history, the great historian John Hope Franklin. Why is Franklin’s work important to your own story?

Mozingo: John Hope Franklin did majestic research laying out how free people of color were seen as a threat to the whole system of white superiority in the South, and how they were savagely debased for it. A free black man coming into North Carolina from Virginia, for instance, had to place a huge bond with the local sheriff to guarantee his good behavior, or he’d be sold at auction. Children were stolen and sold into slavery, or forced into indentured servitude with white families. Black and white people who married—believe it or not, this did happen well into the 19th Century in the South—were fined, or their marriages were nullified. Mozingos went through all of this. One of the families I wrote about descended from a “colored” man named Christopher Mozingo who was married to a white woman in 1830, and then they seemed to have been driven apart. Franklin dug up incredible anecdotes to bring the brutal history of these mostly-forgotten people to life.

Rumpus: What’s the reaction of other Mozingos to what you’ve found? Especially the information you found in Angola?

Mozingo: Edward Mozingo’s grandchildren and great-grandchildren scattered and tried to reinvent themselves in new places where no one knew of their heritage. They created myths about their origins, and their descendants took these stories as truth. So Mozingos are scattered about the country now, with these myths ingrained in their identity. There is little sense that we are all came from one man, much less any collective acceptance that he was black. So it was strange sitting with some of them because we just had such different backgrounds. Some were very rural and poor, self-described “rednecks” whose families have struggled in America every generation for the last 370 years. Some grew up on the wrong side of Jim Crow, living in sharecropper shacks, tormented by white society. There were a lot of racists, but there were people who really embraced this news of our origins.

Rumpus: I was stuck by the reaction of one of your relatives, Shirlyn, who said she would have perferred that the name have come from Italy! Such an honest, human moment.

Mozingo: Yes, Shirlyn. She is wonderful. She grew up in a black family—at least that’s how society saw them—but she is very light-skinned, and one of her brothers is so light, I mistook him for a “good ol’ boy.” Shirlyn married the actor who played Kunta Kinte’s father in Roots. The presumptuous white guy in me thought she would be ecstatic for some reason when I told her the name is African—but she was disappointed because her family thought it came from Milan. She had her own stereotypes about Africa.

Rumpus: The book is able to merge history with a personal quest pretty seamlessly. Can you talk about the challenges here?

Mozingo: Everywhere I traveled I was looking for the past. So it actually never felt too tortured to let the passages of that past come out amid my quest. Not to say that I didn’t struggle with the structure to keep the narrative tension, particularly because the central mystery is solved pretty early in the book and there was no obvious conclusion. So that tension had to be internal, and it was.

Rumpus: The whole issue of white Mozingos, black Mozingos, and those who straddle both—what does this tell us, not only about your namesake, but about this country in general? This is absurdly broad, but it seems to me that there’s a great metaphor for why we are always confused about who we are right here in your name…

Mozingo: When I first wrote about this for The Los Angeles Times, the headline was, “In Search of the Meaning of Mozingo.” Because Mozingo was much more than a name. It was the story of what could have happened in America if they allowed black people the level of freedom Edward and others had at the very beginning of our country. It was the story of our messy, violent, mixed-race birth, as well as of the centuries of trying to sanitize it, and the tortured ironies that sprung from that (KKK members with Bantu last names, for instance). And it was the flipside of the American Dream, where families struggle for centuries, but are held down by the past as captured in a name.