The five stories that make up All My Friends, a small collection by Frenchwoman (and Prix Goncourt winner) Marie NDiaye, are stories of breakdown. This breakdown is not necessarily the kind of single-character unraveling we expect from good psychological fiction, although there are certainly echoes of that more familiar and intimate falling apart in several of these pieces; instead, NDiaye seems more interested in setting her characters up to hover and worry over the self-disconnecting questions of reality perception and personal narrative—are my world and my person what I perceive them to be? Do others understand my reality, my history, and my memories as I do? The often frustrated desire to answer these questions (either by the character or the reader) is what drives these stories forward, and contained within that unsettling narrative movement is the foreshadowing of imminent collapse.

The titular and wonderfully comic “All My Friends,” which opens the book, is narrated by an older man, a retired schoolteacher who is also a personal and social failure. This narrator’s voice, with its pathetic dejection and deluded but dogged optimism, is one of the first delights of this collection:

I feel very alone. The glance I then give Séverine’s husband must be pleading or anxious, for in a low, kindly voice he replies that Séverine has already decided to keep working for me. I go on my way, listless, smelling the scornful workings of a conspiracy, a condescension, in the air of the street. And what my nose senses is confirmed by what I see on the opposite sidewalk, all aglow with a heart-wrenching gaiety: my wife and children, all three having long since made up their minds not to speak to me again, walking with long, lively strides toward the house that they live in without me.

Scurrying to keep up, I call out, first to my two sons and then to my wife. “How are you doing?” I shout, forcing myself to sound cheerful, lighthearted. They briefly turn their irritated gaze on me, three pairs of dark eyes, all identical and similarly hostile, then hurry off toward the avenue that I theoretically don’t even have the right to walk down.

Disowned by his wife and children for reasons the curious reader is never allowed to learn, the narrator is now hopelessly in love with his housekeeper, a former student who enjoys pretending she doesn’t remember being in his classroom, as well as obsessed with gaining the respect of a former protégé, now a grown man. As the story gathers momentum, as the narrator plots schemes to alter his hopeless situation, his machinations become increasingly slapstick, until, as all good dark comedies do, “All My Friends” veers with perfect timing to its tragedy. 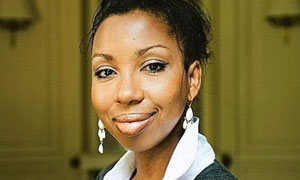 “The Boys” begins with the sale of a teenager named Anthony. He is sold by his parents, and sold away from their poor farm to a woman from the city. The sale takes place in the most domestic and quiet of settings, over lunch at the family’s farmhouse, but NDiaye draws out the time-lapse of the transaction quite painfully. Everything in this scene is being watched by René, a neighbor boy from an even poorer family, and each second that passes, each glance shared or word exchanged between the father, mother, the city woman, and the uglier younger brother is stretched extremely tight through René’s scrutiny and his sudden jealousy. René’s jealousy increases as the fruits of Anthony’s sale and “labor” pile up in the household he left behind. NDiaye’s close focus on René and his interpretation of what has happened only reveals the eeriness lurking beneath the events as René follows them and the likelihood of Anthony’s sale being a sham. The disconnect between self-perception and actual events is stretched to include the reader in “The Boys,” as we can only gather dark hints of what has actually happened. But that obscure darkness becomes a powerfully imaginative stimulus as we begin to envision what will happen to René once he decides to find a way to be sold as well.

Both “The Death of Claude François” and “Brulard’s Day” deal with memory and attempts to square past events with current life situations. In the first story, two old friends confront their childhood through the strange and hilarious memory of the unexpected death of a pop star thirty years earlier and how that death, as implausible as it having an effect may seem, set the course of their lives. In the second, an aging film star on holiday at a mountain resort reviews her career and her private life. But in both, what is happening and what has happened in the past for these characters is not fixed or necessarily knowable. More than anything else, NDiaye seems interested in engaging with the fractured pieces of personal identity, in investigating the unknowable spaces in one’s memory, one’s history and one’s self.

The final story of the collection is the most mournful and the most conventionally realistic. It involves a mother taking her damaged son on a bus trip—with the explicit goal of abandoning him at their destination. He isn’t a child, but he is child-like, and taken realistically this story is a series of haunting interior conversations and personal musings. But again, like the other stories, this narrative gravitates to larger questions. How do any and all mothers give up their children to the greater world? When is it time to finally let go? Isn’t any form of abandonment just as shocking? And what about that complicated maternal desire for personal liberation from the “burdens” of motherhood? The last line of this story embodies the ambivalence that runs through this entire collection:

Those other sons of hers wouldn’t have understood at all, it occurred to her, and she missed this one already. She’d be coming home alone, thank God: how she would miss him!

Aside from this new translation of All My Friends, only her Prix Goncourt-winner Three Powerful Women and her Prix Fémina-winner Rosie Carpe are available in English. But with thirteen novels, several story collections and seven plays to her name, Marie NDiaye has a significant publishing history. Her work has also stimulated a good-sized body of critical writing in France. Hers is a unique voice among other contemporary French writers, and her fictional vision both intricate and distinctive. She is an example of exactly the kind of non-Anglophone writer who should have already been translated in full. Hopefully, this new translation will renew interest in her work, prompt further translations and give English readers the chance to experience her entire contribution to world letters.