In an interview Edwidge Danticat once said that as soon as she began to write, “my silence was destroyed completely. Indefinitely.” In her remarkable works of fiction and nonfiction, Danticat has explored how the coercive power of collective silence about gender, race, and inequity creates deeply personal damage for individuals. Danticat’s new novel, Claire of the Sea Light, is a further investigation of the infinitely rippling consequences of silence.

Set in the fictional Haitian village of Ville Rose, a seemingly idyllic setting, Claire of the Sea Light begins on the seventh birthday of Claire, whose mother died giving birth to her and whose poor fisherman father struggles to care for her. In eight titled sections, the novel portrays characters whose lives intersect with this family, circling back in time but returning us, at the end, to the night of Claire’s birthday. Part One begins by focusing on Claire and her father, Nozias, who hopes to give her away to someone who can afford to raise a child, possibly Madame Gaëlle, who is the perspective character in the next section. Madame Gaëlle’s more privileged life has also been scarred by misfortune—the murder of her husband in a senseless gang killing, the death of her daughter in a car accident. As it happens, Madame Gaëlle’s husband was murdered on the day she gave birth to their child, which happens to be the same date as Claire’s birthday, serving a pattern throughout of linking birth or renewal with death. Next, we jump to the story of Bernard, who inadvertently set in motion that gang killing and paid for it with his life, and Part One concludes with the tale of Max Ardin, Jr., a friend of Bernard’s who has returned from Miami for a visit just at the time of Claire’s birthday. In Part Two we learn the stories of Max Ardin, Sr., and Louise George, a radio show host who in the course of the novel interviews Flore, once a servant in the Ardin household.

Part of the pleasure of reading a novel-in-stories is seeing how the author will make literally tangential connections prove to cohere in a novelistic way. In Claire of the Sea Light, the cast of characters represents a community in which the very poor live closely with the more privileged and corruption motivates both the respectable middle-class and gang members. Even the natural world has been corrupted; Ville Rose is subject to flooding as a consequence of soil erosion and the cutting down of trees for firewood. Each of these supporting characters mourns something lost in ways that symbolically link to Claire and Nozias’s mutual longing for the child’s dead mother.

When Danticat focuses on Claire and her father, the writing is intimate and moving. When Nozias recalls a moment with his pregnant wife, Danticat beautifully compresses their deep feeling for each other as well as reminding us of how little else these two had aside from their love for each other: “When he bent over and pressed his ear against her belly in the wash-and-dress room, she kept muttering, ‘Sa se pa nou. Se pa nou. This is ours. Ours. Ours. Ours.’” Here is Claire, longing for the mother she never knew: “Sometimes when she was lying on her back in the sea, her toes pointed, her hands facing down, her ears half submerged, while she was listening to both the world above and beneath the water, she yearned for the warm salty water to be her mother’s body, the waves her mother’s heartbeat, the sunlight the tunnel that guided her out the day her mother died.” We’re meant to feel the purity of this longing set against the more spiritually impoverished lives of the other characters.

Danticat portrays a ravaged Haiti, where parents count themselves responsible if they pay hush money to the victim of their son’s sexual predation, where a school reformer who condemns corporal punishment of children doesn’t balk at emotional battering, where a woman can count on corrupt militia members to help her wreak vengeance, where police can beat an innocent man with impunity. Part One of the novel sets up the silences that will be broken by the revelation of secrets in Part Two, so the book’s structure heightens our awareness of the dissonance in the characters’ lives. 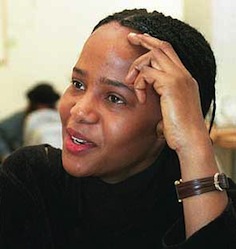 Yet at times Danticat’s reportorial interest in setting characters in place in this context outweighs the need to set them in motion in relation to each other. In Part One, when Max Ardin, Jr., returns home, the former servant Flore awaits him, along with the child he fathered before he fled for the States. Only later do we learn that this child is the result of a rape, and we discover this in an oddly convoluted way. After Max, Sr., spurns her, Louise George interviews Flore on the air in order to make public Flore’s story of this trauma. It seems somewhat arbitrary to contrive this scenario in order to reveal this secret. Whatever Louise’s motives are, why does Flore break her silence now, and why does she choose to do so in a humiliatingly public form? In Max, Jr.’s, earlier section, when Max first meets his son, the tone is one of wistful regret for not having known the boy, and Flore not only brings her son to meet Max at his father’s house but allows Max to drive her home, actions that are hard to reconcile with the revelation that he raped her. Max, Jr.’s mask doesn’t even slip in the scene in which he meets his son, and he is never called upon to respond to any literal pressure, any demand to act. Though he reappears at the edges of the action, the novel never returns to Max’s perspective. The scene establishes a character as implicated in a corrupt society without pursuing its consequences for him.

This strategy recurs late in the novel, in Madame Gaëlle’s section, set on the night of Claire’s seventh birthday, when Danticat reveals a secret that implicates her too. Madame Gaëlle, acting on mere rumors about her husband’s murder, hired corrupt Special Forces officers to exact violent revenge. But facts that recast our understanding of a character put the author under the obligation to make us feel how their consequences continue to resonate. On this night Yves Moulin, the motorcyclist who accidentally killed her daughter, happens to show up at the bar where Madame Gaëlle is having a drink. Here’s an opportunity to see if his guilt might trigger her own, but when he approaches her, she simply turns away. Soon after this, Madame Gaëlle goes for a walk on the beach, where she happens to come across Claire and suddenly announces she’s made a decision about taking Claire from her father. Consider the difference if some tension with Moulin led Madame Gaëlle to go looking for Claire. Because this string of events happens by chance rather than by intention, it’s hard to judge whether Madame Gaëlle’s decision is selfish or in some way redemptive.

There are intricate symbolic and structural patterns in this novel, but the author doesn’t fully realize them because too often the characters are forced to fit those patterns rather than being the dynamic agents of them.

Catherine Brady is the author of three story collections, most recently, The Mechanics of Falling, recipient of the Northern California Book Award for Fiction. She teaches in the MFA in Writing program at the University of San Francisco. More from this author →