Atlanta Falcons tight end Tony Gonzalez is 37 years old, a PETA advocate, a bilingual community volunteer, a former vegan who currently identifies as “mostly vegan,” and an NFL player who holds the all-time league records for touchdowns and yards at his position.

When he retires at the end of the year, he’ll be remembered as one of the best tight ends in NFL history, and as a man whose heart, athletic skills, and bilingual outreach have made him a hero to Spanish-speaking football fans around the world. What makes the latter remarkable is that Tony only began learning Spanish less than a decade ago.

Tony’s paternal grandfather was born with the surname Goncals in the Portuguese-speaking islands of Cape Verde. When he was a child, his family moved to Buenos Aires, and learned Spanish before eventually moving to the United States, where their name was recorded as “Gonzalez” at Immigration & Customs.

Now a United States citizen, Tony’s grandfather did not speak his Argentine Spanish around his children. “If you talk to a lot of people from that generation, the Latin parents didn’t teach their kids Spanish on purpose,” Tony told ESPN about his father’s upbringing. “They wanted them to be American, and they thought it would hold them back if they had any type of accent.”

Tony grew up in Southern California but learned as much Spanish from his English-speaking family as a kid in North Dakota would. As he began his pro career with Kansas City, his first NFL team, many Spanish-speaking fans saw the name on the back of Tony’s jersey and presumed a linguistic bond. 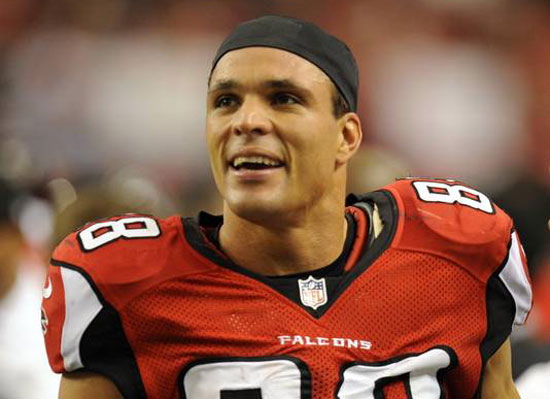 “If I’d go to Oakland or a place where there are a lot of Latin people – actually almost everywhere – I’d walk out and people would say, ‘Tony, hola. ¿Como estas?’” Tony says. “I’d be like, ‘Bien.’ And then they’d ask me more and I’d be like, ‘No hablo.’”

It may be true that between his monolingual parents, Tony’s actual Latin heritage is minimal, and that even his Spanish surname is an Ellis Island spot-weld over his grandfather’s Portuguese one. Still, millions of children who watch the most popular sport in the U.S. don’t care. They see Tony Gonzalez, and see someone who looks like them with a similar name to theirs scoring touchdowns. He’s a hero to them, and Tony understands this; he remembers his own formative years as an era when Latino NFL players were much harder to find. “When I was growing up, there was only [Bengals offensive lineman] Anthony Munoz to look up to,” Tony told New Jersey.com.

Eventually, an experience on a trip to Mexico inspired Tony to more meaningfully connect to a community that, for years, had been trying to connect with him. He saw a little boy wearing a red Gonzalez jersey, so he stopped to introduce himself, first grasping that he couldn’t hold an actual conversation with the youngster, and then realized something else. “He had no idea who I was,” Tony told ESPN. “And then it hit me. This little kid from another part of the world, who doesn’t speak English or probably even own a TV, picked that jersey because it had a Latin name, my name, on it. That summed it all up for me.”

That spring, he went to the Mexican city of San Miguel de Allende on a total-immersion trip, taking daily six-hour one-on-one language courses while living with a Mexican family. The weeks spent in Mexico as another anonymous American fumbling with Spanish, a beginner surrounded by experts, helped him grow as a person as he learned the language. “It humbled me,” he says.

He emerged from his time in San Miguel a much more able and confident Spanish speaker, and has since become a focal point for Spanish-language outreach among a small but growing fraternity of NFL players. Today, of course, Tony Romo, Victor Cruz, and Mark Sanchez are also household names, but Tony still stands apart and not just by virtue of his Hall of Fame career.

“Learning Spanish,” he told the AP, “it’s one of the best things I’ve ever done in my life.”

When a professional athlete legally alters his or her name, the reasons are as manifold as the personalities. Some name changes, like World B. Free and Metta World Peace, convey a message; others, like Fausto Carmona, covered a lie about a birth date, while a select few, like Chad Ochocinco, communicated one’s affection for one’s uniform number.

This month, there may be a new one, and it doesn’t look good on paper: Donte Hitner.

“That’s what I do, that’s my game,” San Francisco 49ers safety Donte Whitner, known for his hard-hitting tackles, told the San Jose Mercury News. “That’s my last name, and removing a letter makes it pretty cool.” 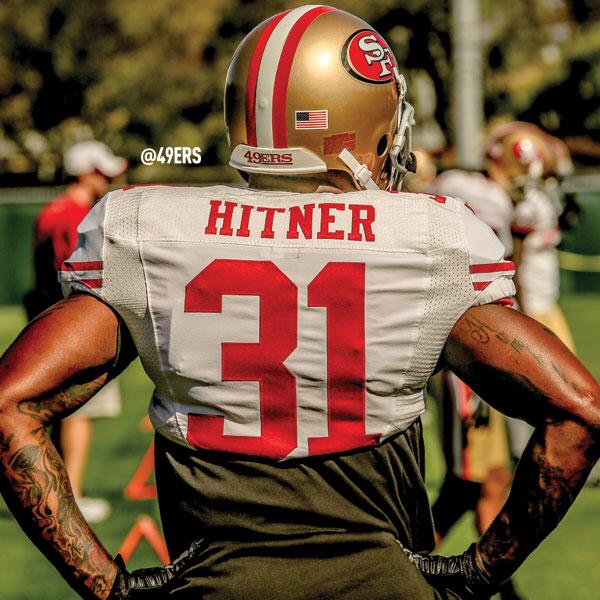 He did ask his mom first, and while initially she didn’t approve, she gave Donte the OK last month. The NFL is fine with it, provided that he first buys all of the extant NFL-licensed “Whitner” products, with his own money.

The U.S. Government is proving to be a harder obstacle, and not because they have an issue with a professional athlete changing his surname to something unmistakably redolent of pure evil, but because they’re closed.

“Paperwork for 49ers’ Donte Whitner to change name to ‘Hitner’ cannot be processed due to government shutdown. Hitner shut down for now,” ESPN’s Adam Schefter tweeted.

Completely irresponsible prediction of the week: Terrance Williams, Golden Tate, and Kris Durham, who all scored their first touchdowns of the year last weekend, will each score again this weekend.

Rookie Williams is the next great borderline start-able Cowboys receiver in the tradition of Miles Austin. Seattle’s Tate may get eleven looks once again if Zach Miller is still out. Matthew Stafford’s college teammate Durham is six-foot-six, on the field all the time because of his blocking, and usually catches what’s thrown at him, which in Detroit should be enough to get an eight-dollar drink named after you.

ALWAYS CRASHING IN THE SAME CAR

People have long told me that fantasy football is gambling, and if money’s involved, I suppose it damn sure is, but it still doesn’t feel like the Las Vegas sports book gambling with its parlays and over/unders and point spreads. Those who care about such things are staining their pantlegs in anticipation of this week’s Denver Broncos vs. Jacksonville Jaguars game, in which the Broncos are favored by 27.5 points, the highest margin seen in decades.

It’s unclear what this means to fantasy players besides this: Start all of the Broncos, even the ones that are on the bench, injured, or retired. Their proximity to a potentially historic margin of victory will elevate an otherwise beautiful fall Sunday into dizzying apogees of statistical achievement, meaningless to everyone in the world except professional gamblers, number-loving nerds, and athletes with performance bonuses in their contracts. For everyone else who cares, the only stat that matters is the Win and that’s seemingly already been conferred to Denver.

Last weekend, I watched their opponent, and they are indeed quite bad.

Even my girlfriend, who is typically uninterested in all football not involving the Cleveland Browns, knows this. She was sitting on my couch, reading about what her occupation calls “gravidity” (she works at a children’s hospital) and she asked me, “So what game is on?”

“St. Louis Rams versus the Jacksonville Jaguars,” I answered.

“What in God’s name,” she replied, “are you watching THAT for?”

“Because I want to see a bad team play a worse team,” I said.

And the Jaguars did not disappoint; they were indeed worse than the Rams, though any team that loses its two starting offensive tackles, the bulwarks of pass protection, and continues to start Blaine Gabbert at quarterback, is trying very hard to make football look frustrating and pointless.

The Jaguars starting Blaine Gabbert at quarterback is sort of like your mom putting cat food in your second grade lunch box. Which, maybe, if you’re a mature second grader with a nuanced sense of humor, you could laugh off and assume that your mom was sick, or drunk, or playing a traumatizing and unfunny joke.

That said, Jacksonville coach Gus Bradley is like a mom that puts cat food in your lunch box every day for years, and whenever you complain about it says, “cat food is the lunch of the future,” and “we’re sticking with cat food” and “We know that there’s a box of Thin Mints in the freezer (Tim Tebow) but we like cat food and so will you.” This helps explain why a Florida TV station recently apologized to their viewers during the broadcast of a Jaguars game.

What makes this weekend’s contest unclear, at last, is the fact that Blaine Gabbert is not starting for Jacksonville. This is not because Gus Bradley or anyone in Jaguars management has come to their senses; my God, no. Gabbert, exposed to the St. Louis pass rush by his increasingly grim offensive line, got beat up so bad, he’s too hurt to play.

“The tears of the world are a constant quantity,” Samuel Beckett writes in Waiting For Godot, obviously mirroring the parity of the NFL. “For each one who begins to weep, somewhere else, another stops.” And this is usually how it works. Look at the Chiefs, after all.

Indeed, in this league no team has to stay bad for very long, unless they savagely will it on themselves through bad drafts (the Oakland Raiders) or, as in Jacksonville’s case, through fealty to one’s handpicked players in spite of their demonstrated incompetence. What this means for Week Six is that Chad Henne, Jacksonville’s marginally better backup quarterback, will throw touchdowns to Justin Blackmon and Cecil Shorts and Ace Sanders in garbage time, and the Jaguars will lose by 24 or 25, re-breaking many a gambler’s aftermarket heart. 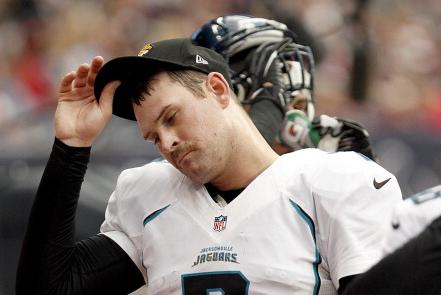 Despite the accidental improvement at the game’s key position, Jacksonville’s failings are too structural to hope for parity anytime soon, let alone this year. Henne’s comparative success will be like Obama’s Nobel Peace Prize, earned mostly by implying, through his presence, a perceived alternative to the maw of contemptuous awfulness he inherited, and will demonstrate, thusly, that all achievement is inert in such a context.

So, despite all the scoring in this mile-high abattoir, this will be a joyless matchup for the fair-minded, for non-gamblers, for those who claim they “just want to see a good game.” Rooting for the Broncos will feel like cheering for a professional wrestler to beat up a three-legged puppy, and the fact that there is no mercy rule—there will be three broadcast hours of this—feels spiritually corrosive.

Meanwhile, anyone cheering for Jacksonville will occupy the loneliest and saddest realm of sports fandom, where all hope is purged, where shamed fans beg, please let us not lose by so much this time; let our grotesque and appalling effort go as unremarked as a fart among Buckingham Palace guards. The night is young, and we are dead already, trapped like autumn leaves under the early snow of a winter too long and too cold to be a season.