There is no one poetry style that has a sure universality to it; some readers seek mind-bending abstraction, or word play in some kind of form or message discovered through a hunt across the page, whereas many others prefer specific and obvious themes and still others pursue a certain type of “voice” and/or tempered use of language. Examples do not end there. But Mary Oliver manages a universal nature to her work which seems to offer something to any reader of poetry. Oliver’s latest collection, Dog Songs, is the perfect example.

A small book such as Dog Songs can be completely revealed in a careless review, but it must be stated that the collection is—on the surface—indeed a series of poems about dogs. What the title, cover and inside jacket does not explain is the far-reaching aspects of the human component of the poems within.

The beginning of the collection takes its time stepping to its most fully realized self. In “How It Begins” the book, well, begins with the first lines:

Simple enough. Unchallenging and light. In “How It Is With Us, And How It Is With Them,” a second possible theme (apart from the book being about dogs) appears for discussion:

We turn to making money,
then we turn to the moral life,
then we think about money again….
…Steadfastness, it seems,
is more about dogs than about us.
One of the reasons we love them so much.

An argument arises for dogs, if not pets in general, as necessity versus the craze of the external and solitary world. And by “Every Dog’s Story” it can be assumed a book of reflection/meditation by a loved American poet is what we as Reader have as addition to the body of Mary Oliver’s work:

But sometimes dreams are dark and wild and creepy
and I wake and am afraid, though I don’t know why.

But here is also in the beginning an opportunity, if recognized and appreciated, to feed a curiosity not so simply extracted from the simplicity of the poems themselves: Can this book be read as “human songs” as well? The answer is a resounding, inarguable Yes. By “Luke,” Dog Songs has found itself and is suddenly prepared to turn over the power of its content. A truly lovely poem likely to stir an attentive reader into identifying a shift in the collection, Oliver writes:

and easily
she adored
every blossom,
not in the serious,
careful way
that we choose
this blossom or that blossom—
the way we praise or don’t praise—
the way we love
or don’t love—
but the way
we long to be—

My favorite poem from Dog Songs came early in the book with “Her Grave.” And as I historically tend away from too much divulgence regarding those poems that stand out personally, I will offer its elements of loss, companionship, stark imagery and an existential yearning for answers to the unanswerable, though Oliver succeeds in her efforts to fearlessly try.

The poems stretch forward contagiously from here on, with tones of the human experience directly expressed, as in “The Sweetness of Dogs”:

Thus we sit, myself
thinking how grateful I am for the moon’s
perfect beauty and also, oh! how rich
it is to love the world.

and in “Percy, Waiting For Ricky”:

But there are days I wish
there was less in my head to examine,
not to speak of the busy heart.

In addition to this sincere analysis of a moment or prolonged situation of life and thought and routine and habit, so is there a wealth of connectivity expressed between Oliver and one of many of her dogs that have inhabited her heart and life over the years. In “For I Will Consider My Dog Percy” she writes:

For he came to me impaired and therefore certain of
short life, yet thoroughly rejoiced in each day.

For he listened to poems as well as love-talk.

Social commentaries are made as well, through Oliver’s dog Ricky explaining a notion to her in “Ricky Talks About Talking”:

One person is talking,
the other one is not really listening.
Someone can look like they are but they’re
actually thinking about something they
want to say, or their minds are just
wandering. Or they’re looking at that
little box people hold in their hands these
days. And people get discouraged, so they
quit trying. And the very quiet people,
you may have noticed, are often the sad
people.

A testament to modern communication, surely, and coming from dog to person no less (perhaps a jab at our inability or unwillingness to notice our failings at meaningful connection in today’s technological society), though it is more interesting and important to note that human experience is so artfully infused with the seemingly basic suggestion of Dog Songs paying homage to the love of animal(s). This book does so much more than it might appear to be doing. 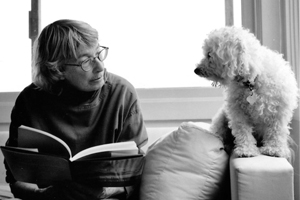 The conversation between dogs and Oliver continues in such a manner it is easy to forget the present personification, unless the reader is satisfied with the possibility that after some time together a look or motion can be interpreted as full statements or inquisitions, same as in human relationships as friends and lovers grow old together. In “Show Time,” Oliver and Ricky discuss the bigger picture:

Okay, I said. But remember, you can’t fix
everything in the world for everybody.
“However,” said Ricky, “you can’t do
anything at all unless you begin. Haven’t
I heard you say that once or twice, or
maybe a hundred times?”

The poet offers in an essay at the end a more direct observation of the innate wildness inside of us which can be understood vicariously through our relationships with animals, wild and our own. But the poetry retains the reflection/meditation aspect while having added to it a quality of gift-giving, the book itself a provision of examples of what life overall was, is, can be and will continue to be through any lens founded upon love, loyalty and trust. In its entirety Mary Oliver’s Dog Songs is, plainly put, a lovely and accessible book of poems.

Damon Ferrell Marbut is author of the coming-of-age novel Awake in the Mad World and the collection of poetry, Little Human Accidents: Chaos Poems From The Brink. Marbut's works have been published in magazines and journals including Southern Writers Magazine, Garbanzo Literary Journal and Literary Kicks as well as the textbook The Conscious Reader. He has recently completed a new novel and collection of poems. Updates on the author can be found at www.facebook.com/DamonFMarbut More from this author →