“…blurbs have gotten so over-the-top. With fewer eyes to see them, an endorsement must be big to gain any traction.”

—Jennifer Weiner, “All Blurbed Out,” The New York Times, May 17

“A hugely impressive debut. Not since Gilgamesh has a work of ancient Near Eastern scripture been this loaded with practical advice. Can’t wait to see what this author does next!”

THE ODYSSEY, by Homer

“After his breakout success with The Illiad, the blind poet shows no signs of second-epic syndrome. Sprint to your closest scribe and snag a copy before the papyrus* runs out!”

THE DIVINE COMEDY, by Dante Aligheri

“Nowadays, who’s got time for poetry, what with everyone gearing up for the Renaissance? But this laugh-out-loud comedy is a must-read. Perfect for the beach, or when taking a break from your fresco.”

–Petrarch, father of humanism and runner-up for National Book Award

THE PRINCE, by Niccolò Machiavelli

“Unputdownable. If this rip-roaring, gob-smacking, take-me-with-you-to-the-Palazzo-Vecchio gem doesn’t start the field of political science, I seriously don’t know what will.” 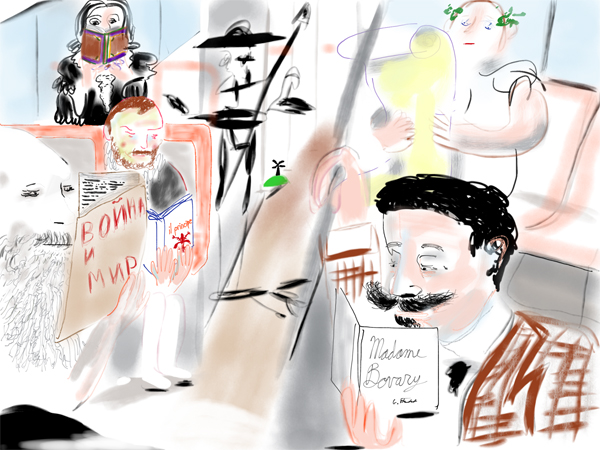 “Call off the search party: paradise found, right here in the pages of this heart-breaking, wet-yourself, order-for-Father’s-Day publishing sensation. Milton puts the magnum into magnum opus. If this doesn’t make the shortlists, someone seriously needs to start a new literary prize.”

“He knocked ’em dead with Sentimental Education, and now Flaubert is back with a Bovary. Suburban angst has never been hotter. Flaubert really goes for it here—and he nails the landing. (By the way, Gustave, I hear you’re at the Melbourne literary festival this year. Let’s totally grab a drink after sessions?)”

“I’ve been a Bronte fan for years, so when I learned we had the same agent, I was stoked to get an advanced copy. Verdict? Outta da park.”

WAR AND PEACE, by Leo Tolstoy

“I’m not gonna lie: after reading ‘War,’ I thought Count Tolstoy couldn’t keep up the pace. But ‘Peace’ is equally as rocking. Definitely the greatest novelist ’til Franzen.”

–Fyodor Dosteovsky, author of the controversial hit Crime and Punishment

IN SEARCH OF LOST TIME, by Marcel Proust

“More addictive than absynthe. Harder to turn down than a blurb-request from your spouse. Buy. These. Books.” THE METAMORPHOSIS, by Franz Kafka

Tom Rachman was born in London in 1974 and raised in Vancouver. He attended the University of Toronto and Columbia Journalism School, then worked as a journalist for the Associated Press in New York and Rome, and the International Herald Tribune in Paris. His first novel, The Imperfectionists, was an international bestseller, translated into twenty-five languages. Random House published his most recent novel, The Rise and Fall of Great Powers, in June. He lives in London. More from this author →