1982 was a shitty year. I was 9 years old and in the 4th grade in Appleton, Wisconsin. My parents were going through a nasty divorce, the kind where each parent sleeps with the other parent’s best friend out of spite and there’s a custody battle and threats to split me and my brother up or move out of state and a lawyer asking me while I cower in a gigantic leather armchair, alone, which parent I love more and prefer to live with. The kind of stuff you see on Jerry Springer.

Needless to say, I was a troubled little chap. My dad wasn’t around often. My mom worked a lot, wasn’t at home much, and had many of her own issues to deal with (drug abuse, loser boyfriends, keeping the utilities turned on). My days were long and dark.

Fortunately, 4th grade was amazing. I was lucky enough to be assigned to one of those teachers who only seem to exist in the movies, a creative, smart, experienced, and energetic dude with a crazy moustache who was ecstatic to come to work every day: Mr. Andy Horan. Amazing fella. Still is. Every day under his wing was an adventure. The legendary classroom—room 212 at Huntley Elementary School—is one of the most vivid memories of my childhood. There were papier-mâché totem poles. Cardboard castles. A cannon made of a glass bottle, match heads, and a ball of clay. There were toothpick airplanes that we’d built hanging from the ceiling. The desks were lined up like city blocks and each kid had an “address” on one of the room’s “boulevards.” The class had its own economy, with currency called Funny Money. (At one point Mr. Horan trusted me to be the banker and I robbed the bank!) The radiator at the back of the room was stacked with Mr. Horan’s old comic books and kids were encouraged to tear through them.

I’ll admit it: until 4th grade, I wasn’t a reader. There simply weren’t many books in my house, and my parents didn’t encourage reading or read to us much. I had not sought books out. In my defense, I was often busy doing a paper route or screening phone calls from creditors or shoveling snow. But Mr. Horan changed everything. There were books all over the classroom. Piles and piles. Whenever we finished homework early, we were made to read books. We had to read. It was not a choice. And Mr. H. had great books. Classics. During free time, we were encouraged to hit the comic book stacks or visit the school library. Mr. H. read us entire books throughout the school year. The Door in the Wall. A Wrinkle in Time. Finn Family Moomintroll. The Hobbit. Also a book called Krabat by Otfried Preußler.

(Actually, at the time, the book was called The Satanic Mill. What public school nowadays would let a teacher get away with reading a book with the word “Satanic” in its title? None, probably. But Mr. H. was a rebellious soul and he read it to students year after year until eventually some parent’s complained and he chose something else.) 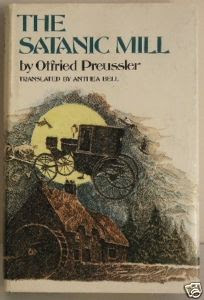 Krabat had me from the first sentence. The main character, Krabat, is a boy only a few years older than I was. Krabat is an orphan and a beggar and he lives somewhere cold (like I did, and Mr. H. read us the book in the dead of winter). Krabat was lost. (I felt lost.) Krabat needed a family. (So did I.) The story is about how Krabat happens upon (or is drawn to?) a mysterious grain mill where he begins to work as an apprentice to a dark and mysterious magician/master. There’s black magic, suspense, murder. There’s anthropomorphism, a teenage love story, good vs. evil. It’s a fantabulous tale. Mr. Horan would read it to us in many different characters/voices and would always manage to leave us hanging at a suspenseful part. Mr. H.—who was born in Czechoslovakia—would also occasionally chuckle to himself at the subtle Wendish-Czech-German jokes that Preußler had snuck into the story (which I only found out about as an adult).

Krabat turned out to be my favorite book that year. It put me on the path to reading. I checked it out and reread it many times over the course of grammar school. Later on, after Krabat had fallen out of print in the US, I sought (pre-Internet!) and purchased my own copy of the book, which I still have.

I’ve kept in touch with Mr. Horan over the years and we’re still buddies. Whenever I visit my hometown, I stay at his house. We’re on a first-name basis. I call him Andy. I have helped him rake leaves and run errands. I think of him as my second father.

Several years ago, I thought about what I could do for Andy as a surprise for his birthday, so I went a’huntin’ online to find Mr. Preußler’s contact information. Krabat had been one of Andy’s favorite books as a child and I thought he might get a gas out of writing Preußler a fan letter, Czech to Czech. I found his contact info (Preußler was at that time in his late 80s and living in Germany) and passed it along to Andy. Andy was gleeful, wrote Preußler a letter and, a few weeks later, Preußler (through his daughter as Preußler himself was too old and frail, apparently, to pen letters) wrote back. I was proud to have made the connection. Around the same time, I had been running a book-industry “unconference” in New York called Book2 where I met Sara Kramer of New York Review of Books Classics and we became friends. Every once in a while, I’d email her to humbly suggest this or that adult or children’s book that I’d loved and that I thought NYRBC might help bring back into print. I of course suggested Krabat.

I passed Preußler’s contact info onto Sara and waited. A few months later (after Sara had found a used copy of the book and loved it—everyone who reads it loves it), Sara wrote to say that her press had secured rights and the book would soon be back in print in English after many years. I was ecstatic. I wanted to tell Andy, but I also wanted to hand him a copy of the newly pressed book as part of a surprise. So I didn’t spill the book beans… yet.

In the fall of 2013, with Krabat on schedule to be published the following year, I checked in with Sara. “How is it coming along? When will it be out? OMG tell me!” Sara mentioned that things were going according to plan but that they had not as yet decided upon a cover illustrator for the book.

A few months later, while I sat at home over Christmas week, relaxing, without much else to do but drink egg nog, I decided to doodle out my own concept of a cover for the book. I loved the story, had read it many times. I also have kids and an entire shelf of NYRBC children’s books. (I love the NYRB design style and know it well.)

So I grabbed a Sharpie® and drew some snow and a mill cart. A pair of horses. I drew some ravens and The Man With the Plumed Hat. I sent it to Sara, mostly as a “if I was in charge, it would look like this!” and expected her to politely compliment it and nothing more. To my great surprise, the press decided to use my sketches as the actual cover.

Krabat has been a part of my life for more than 30 years. It is the favorite children’s book of many writers (including Neil Gaiman). I’m delighted that it is back in print and that I am a small part of that story and that many others will now have a better chance of being able to read it. (My advice: read it out loud!) I’m glad of the current title, Krabat and the Sorcerer’s Mill, which more accurately represents the story. (You’ll see how.) The book was the first book I loved… it turned me into a book-lover and avid reader. When I got my copies a few weeks ago, I reread it and am happy to report that I still love it, maybe even more, and for different reasons than I loved it in 1982. (For example, I’m much more appreciative of the folk-tales Preußler weaves in. I also adore the drop-caps) I’m about to read it aloud to my own two children (after I finish reading them The Hobbit) and can’t wait to leave them hanging.

Sometime very soon I’m going to visit Appleton, Wisconsin and hand ole Andy a copy of the book and tell him a story about how a 4th grade teacher read an anxious kid a book that changed him forever. Listen, though: if you know Andy, don’t tell him. I want it to be a surprise.

Chris Kubica is editor of Letters to J. D. Salinger and Associate Producer of Salinger, the Weinstein Company feature-length documentary film. Co-founder of the Book2 unconference in New York and the Read Ahead unconference which premiered in London last year, Chris lives in Chapel Hill, NC USA. Like the rest of you, he’s working on a novel. www.twitter.com/chriskubica. More from this author →