Nonfiction is hard to pin down. When I tell people I write nonfiction, I assume they imagine 800-page biographies of dead presidents, or misery memoirs about years of drug addiction while parents are dying of cancer, or scathing book reviews in the Sunday edition of the New York Times. Nonfiction is too many things to be given one simple name, so it’s easier to define it by what it’s not. And the one thing it’s not is fiction.

“Nonfiction is the whole realm from investigative journalism to pose poems, from manifestos to love letters, from dictionaries to packing lists,” writes Rebecca Solnit in the introduction of her new book. “This territory to which I am, officially, consigned couldn’t be more spacious, and I couldn’t be more pleased to be free to roam in its expanses.” In The Encyclopedia of Trouble and Spaciousness, Solnit showcases all that nonfiction can do. “As nonfiction—that leftover term apotheosizing fiction—gets defined down as only memoir and essay, I’ve wanted to open it back up again, to claim it as virtually everything else,” writes Solnit in the introduction. “Calling this anthology an encyclopedia was a way to call attention to that range.”

I am a nonfiction junkie. I love the different possibilities of the genre. I would happily read an anthology of shopping lists. If you’re willing to trust in Solnit to take you through the magical range of nonfiction, then you will want to read this Encyclopedia. She writes, “I hope that this book is, for the readers, an adventure. For its writer, it’s a travel journal, a list of experiments, a bouquet of theories and practices, and a few proposals about how things could be.”

Trust in Solnit, and do not be put off by the lofty and rather pretentious title. I was reading the book while waiting for a doctor’s appointment, and when my primary care physician saw the book, she said, “The Encyclopedia of Trouble and Spaciousness? What does that even mean?” I explained that the book is a collection of essays about politics, history, geography, and climate change. My doctor shook her head. “The problem with people like that is they don’t speak English—you know what I mean? It’s all scientific terms and jargon.” And this is coming from a doctor. But Solnit is not like that. As I told my doctor, Solnit takes heady, complicated issues of foreign policy and big business and the environment, and boils them down to logical, straightforward, beautiful thoughts. Sure, the book’s title is not exactly catchy—it took a while even for me to remember it: The Encyclopedia of Space and Time? The Encyclopedia of Trauma and Spontaneity?—but with Solnit it’s easy to be seduced by subjects you never knew you could be interested in. 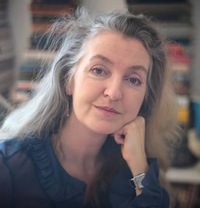 The collection begins with “Cyclopedia of an Arctic Expedition” (2013), a travel essay about Solnit’s journey to Svalbard, written in short vignettes, arranged alphabetically, that center around different Arctic-travel-related terms (Cold, Far, Footing, Graves, Icebergs, Polar Bear). Each moment is beautifully literary, reminding the reader that nonfiction has the potential to be just as lush and artful as the best novel. The essay reads like a piece of magical realism:

Times when the view went all the way to the horizon and no land was visible on that side of the boat, when the sea was a delicate blue-gray and the sky was the same color, the sea smooth with billowing ripples that did not break into waves, the sky smooth, and only seabirds coasting along the surface of the sea, coming close to their own reflections, bending but not breaking the smoothness and vastness. The far edge of the world, at the back of the North Wind, east of the sun and west of the moon, as far as far, at the back of beyond, out of reach, out of touch, out of the ordinary, beyond the Arctic Circle, beyond so many things. Far.

This piece reminds me of John D’Agata’s index-style essay “Martha Graham, Audio Description Of” (1997). But Solnit’s is its own encyclopedia within The Encyclopedia. Pleasantly meta, it kicks off the collection by saying, fasten your seatbelt. Where nonfiction goes, there are no roads.

The second essay immediately switches gears to the sort of thing for which Solnit might be best known: her smart and savvy political analysis. In “The Butterfly and the Boiling Point,” she reflects on the Arab Spring and the cause of revolutions in general. The essay is sharp, full of facts, and it flips the usual observations upside down:

That the flapping of a butterfly’s wings in Brazil can shape the weather in Texas is a summation of chaos theory that is now an oft-repeated cliché. But there are billions of butterflies on earth, all flapping their wings. Why does one gesture matter more than another? Why this Facebook post, this girl with a drum?

The third essay catches you off-guard. In “Rattlesnake in Mailbox: Cults, Creeps, California in the 1970s,” Solnit writes about the wild political and cultural atmosphere of her home state forty years ago. Embedded in her commentary on everything from the Jonestown murder-suicides to Harvey Milk to punk rock, Solnit herself appears in glimmers of a personal essay. “I was fifteen in 1977, the year punk hit California,” she writes, going on later to refer to punks in the first person plural, herself strongly part of this tribe. She drops the lovely piece of trivia that she was an extra in Invasion of the Body Snatchers: “I carried a big green gherkin-like papier-mâché pod in the City Hall scene… though if I made it into the movie, it was only for a flickering second.” In the midst of a history lesson, there is Solnit, offering herself up to her readers, sharing personal moments, inviting you in to her version of California.

Solnit’s essays showcase the range and power not only of nonfiction, but of words themselves. In one of my favorites in the anthology, “Climate Change is Violence,” Solnit writes about how the words we use to describe a problem affect how we react to and treat it:

Climate change is global-scale violence against places and species, as well as human beings. Once we call it by name, we can start having a real conversation about our priorities and values. Because the revolt against brutality begins with a revolt against the language that hides that brutality.

After reading Solnit I feel smarter. I will come away with a fact, an idea, or a way of thinking that I hadn’t come to before. For that reason alone, I highly recommend The Encyclopedia of Trouble and Spaciousness to anyone. You don’t need to be a professional on politics and the environment to read Solnit. In fact, you’ll probably enjoy her more if you are not. Solnit herself isn’t a scientist, or a politician, or a diplomat. She is an activist, a public citizen, and a writer. She is also very, very intelligent. But she is just a curious, engaged person who has done her share of research, and her essays are full of her excitement about sharing that knowledge with you.

My only complaint is the geographical range of the collection. The inside cover of the book contains a map, plotting the points where each essay takes place. As I studied the map more carefully, I grew frustrated. The most heavily concentrated area is the West Coast of North America—which makes sense, as Solnit is from San Francisco—followed by a fair number of dots in the American South and East Coast, and parts of Central and South America. A few stray marks scatter into Iceland, Svalbard, Tunisia, and Japan. But that’s it. Part of the Eastern Hemisphere isn’t even included in the map. I understand that this is because Solnit’s anthology is made up of essays already in her canon, and that it just so happens the majority of her travels and writing have been centered in the Western Hemisphere. But I want more. Send Solnit to the Siberian steppe, Red Square, Lake Baikal, the Gobi Desert, the Indian Ocean, the Persian Gulf, the Black Sea, the temples of Cambodia, the neon lights of Bangkok, Sydney Harbor, Easter Island. Don’t hold her back. Deploy Solnit to every corner of the world and see what she comes back with. I know I at least would love to read it.