The Rumpus Book Club chats with Steve Stern about his new novel The Pinch, about what it means for Jews to be “people of the book,” and how fiction and history can be entwined in entertaining and challenging ways.

We had some technical problems on the night of the chat, so I ended up passing along questions from members to Steve on the phone and retyped his answers as quickly as I could. Any omissions or errors are mine.

Frances: First sentence in the book. It didn’t resonate with others the way it did with me. Was it intentional?

Brian S: That’s the effect it had on me Frances, which felt weird in a way because it’s a book that’s so steeped in Judaism and that’s a New Testament reference. It intrigued me, though, made me want to keep reading.

Frances: I wondered it if struck you, Brian, because you were raised in a religious household.

Jordan K: What are his favorite Chelm stories? I haven’t thought about them for a long time.

Jordan K: They are folktales about a town full of idiots. Steve references them a few times. The residents of the pinch are Chelm-ish.

Frances: They certainly are, and is a delightful way, as in a Chagall painting

Jordan K: Funny to set Chelm in the middle of Tennessee.

Steve Stern: I wanted to explain that “in the beginning” with the book was a multiple reference to the opening of Genesis and the residents of the Pinch as people of the book, and I had meant for that statement to be a kind of prelude or introduction to the appearance of Lenny, a bookish kid who is homeless and shiftless and feckless and his discovery that he is a person of the book.

There should be those kinds of echoes from the outset.

Steve Stern: For Lenny it’s the experience of discovering himself in a book and discovering where he belongs, more in the book than in his own life. Hopefully that changes over the course of the book.

That’s why the book has two endings. He has a life both inside and outside of the book.

Frances: In the beginning was the word is not Genesis. It is the gospel of John. New Testament as you say, Brian, as was another early reference to rolling back the stone from his own tomb

Brian S: Can you talk more about the idea of the “person of the book”?

Steve Stern: It’s an old metaphor for the Jewish people, first conceived by the Ottoman Empire by Muslims, but Jews took the metaphor took it upon themselves, a homeless people in exile, in diaspora. The real homeland for all those years was the Torah, and in a real sense the Jews lived in that book.

Frances: I have seen PBS shows about the people of the book and how that connects all Jews everywhere forever. Powerful.

Steve Stern: Talking primarily about Eastern European Jews living in impoverished circumstances always in peril, fear of pogroms with laws that were very restrictive. Very constricted earlhly existence while inhabiting a book that is timeless and full of the miraculous and was as real to them as that very hostile environment they lived in. The world stayed intact despite the pogroms and disruption until the Holocaust. The Holocaust marooned the Jewish people in history.

Brian S: Where did the subtitle come from, this notion of history and novel?

Steve Stern: I almost I wish I could take it back. Muni’s book, the chronicle of the Pinch, of that moment where time has stopped in that community and he writes what, for him, is an accurate history of the people in this community and it’s at a time where elements of the fabulous have intruded into this pedestrian, commercial neighborhood. He doesn’t label it a history. It’s Avram, the holocaust survivor, who takes 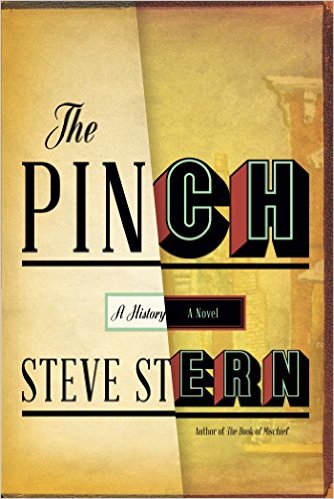 the manuscript and labels it a history. I wanted to retain that, the title of the book within the book. The truth is, my notion is that “a history” would be a subtitle and “a novel” would be written large.

The interface of history and myth is where my stories take place anyway, and there’s always a way I’m trying to tap mythologies with the perfect understanding that history will trump mythology. It certainly happens here. You’ve got a period where the community is enduring a dream time where the literal and spiritual are working at the same time and ultimately the magic gets superseded by history and that’s the movement of this narrative I think. It seems a little inescapable to me.

Walter Benjamin has this notion of the angel of history and in a way that’s paradoxical itself. We don’t have angels in history anymore. We don’t believe in these mythical creatures anymore. He has this idea inspired by a painting by Paul Klee titled Angelus Novus. He’s looking at the past while being blown forward which Benjamin sees as catastrophic. When I look at my narrators attitude, that’s how I would describe it. They’re looking toward the past, toward a time where there was miracle, was magic, where there was a garden, innocence, faith and possibilities, but moving toward the future, which is maybe going to shut them down.”

Brian S: Did you consider putting in a glossary for the non-Jewish reader?

Steve Stern: I tried in this book to trust in the context to reveal the definition of the word. You’re not alone in asking that. One of the Jewish reviews noted that they wished I’d included a glossary.”

Frances: I felt the context was good enough with words I had never heard.

Brian S: What are your favorite Chelm stories?

Steve Stern: Chelm is a town of idiots and they all have their own logic. I’ve read a lot of Chelm stories and no single one is coming to mind, though there’s the famous one where they’re trying to dredge the reflection of the moon from a puddle. I wish I had some handy.

Brian S: How long did this book take to write, and where did it come from?

Steve Stern: I’ve been at this book about 3 years but the truth is I’ve been writing about The Pinch and N Main St for about thirty years. It’s a place that became a home for my imagination back in the 80s. I was unemployed and went begging for a job at a local folklore center and they had me researching the roots of the local Jewish community which was this place called The Pinch that had been inaugurated in the 1880s and was there for about a generation until the Second World War. And then I began to interview and track down survivors of the community, and the children of the original inhabitants.

Steve Stern: I didn’t really identify with Rachel. There was a Rachel working in the folklore center, and I took over from her. I’m afraid I identify more with Lenny. I’m not sure that’s a healthy thing either.

Brian S: Is there anything you’re reading now that you’d recommend?

Steve Stern: I’ve been on a Penelope Fitzgerald kick lately. She was born into a family of intellectuals and she lived this really kind of checkered life for the first sixty years. Brilliant woman forced to live hand-to-mouth, lived on a houseboat, lived in projects. When her kids were grown, she began to write. She started at 60 and had about twenty years, and she’s brilliant. She was able to conjure places with accuracy and precision and brilliance. I don’t know where to go this side of Virginia Woolf for someone like her.

Brian S: Thanks for joining us tonight, and sorry about the technical issues.